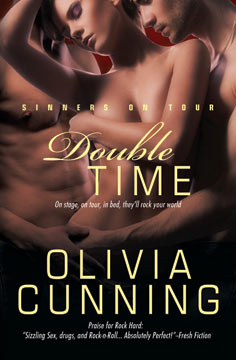 He Craves Her Music and Passion

On the rebound from the tumult of his bisexual lifestyle, notoriously sexy rock guitarist Trey Mills falls for sizzling new female guitar sensation Reagan Elliot and is swept into the hot, heady romance he never dreamed possible.

She Can’t Get Enough of His Body

Ecstatic to be on tour learning the ropes with Trey’s band, The Sinners, Reagan finds she craves Trey as much as she craves being in the spotlight.

They Both Need More…

When Reagan’s ex, Ethan Connor, enters the scene, Trey’s secret desires come back to haunt him, and pleasure and passion are taken to a whole new level of dangerous desire. 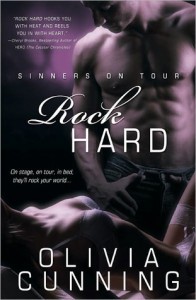 I liked Double Time more than I did Rock Hard, but then again, that’s a pretty low bar to dance over.

Looking at it another way, I took a time out from Double Time for a couple of days, and really wasn’t in any hurry to get back to it either. I obviously didn’t find it as compelling as Backstage Pass.

It doesn’t help much that although Double Time was published third in the Sinners on Tour series, by the internal chronology of the series, it’s book 5. There are events we have yet to read about that are spoiled by this book.

The story of Double Time is one hot mess, but then, so is Trey Mills, the Sinners’ rhythm guitarist. Trey has been in love with Brian Sinclair since pretty much forever. And that love is totally unrequited. Brian only wants Trey’s friendship. 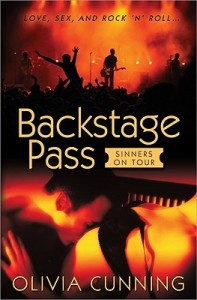 Brian married Myrna, his muse and the love of his life, in Backstage Pass. Trey really, really needs to move on.

Exodus End needs a new bass player. Theirs has a serious case of carpal tunnel. Their publicist hatches this “terrific” idea–a contest to be Exodus End’s bass player for a year! If this sounds a lot like the Nickelback song “Rockstar”, it might be intentional.

Trey sits in when his brother judges the finalists, and damn if one of them doesn’t play just like Brian. He thinks it IS Brian having a joke at his expense.

But as easy as it is for Trey to get Reagan to fall for him, and as surprised as he is to fall for her, there’s one big problem: Reagan’s alpha-hot roommate Ethan.

Ethan lost Reagan because he’s bi, and Reagan couldn’t deal with it. She’s convinced herself Ethan is gay. He’s not only not gay, he’s still in love with Reagan. The more attached that Trey becomes to Reagan, the scareder he is of telling Reagan that he is just like Ethan. And that he wants them both.

That maybe he might be able to love them both. Even if it’s the worst thing in the world for all of them.

Escape Rating B-: I did like this, but it went on a bit too long. Reagan seems to have been willfully blind about Ethan’s feelings for her, in spite of them sharing housing for years. And he kept scaring off all her potential boyfriends.

I thought she accepted Trey’s sexuality way too quickly after being totally against the possibility with Ethan. I know the situation was different because Trey didn’t cheat on her first, but he did conceal what he wanted. For a good reason, but there was still some lying involved.

It was good to finally see Trey get over Brian. His agonizing got old. I think I got a little too much of it by this point, and in this book he was conscious of thinking that he was trying to get over Brian and wrenching his thoughts away. The point got made and went over the top.