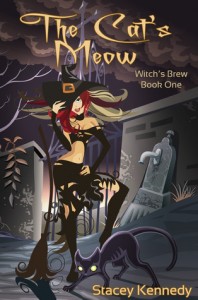 Libby is an Enchantress—a witch gifted by the Goddess to conjure spells. When a magical presence is detected around a recent string of feline slayings, Libby takes the case to uncover the reasons behind the odd deaths. Much to her displeasure, the coven also sends a sexy warlock, Kale, to assist her.

While having the muscle around proves to be useful, fighting the attraction between them is worse than a hex, especially considering Kale is keeping secrets. But soon, Libby has bigger problems than the elusive warlock when her spells turn up clues that point to something far more sinister than slaughtered cats.

Now Libby has landed herself in the midst of an uprising. She trusts no one and isn’t safe—not from the warlocks stirring up trouble. Not from the worrisome rebellion she can’t escape. And certainly not from Kale, who is weaving a very dangerous spell over her heart.

Those poor cats. They gave their all to set the stage for this sizzling paranormal romance. Even I think it was a worthy sacrifice. (Don’t worry, this is not as bad as it sounds. Really.)

Libby is an Enchantress who doesn’t trust warlocks. While she has good reason for her mistrust, it does put her in one heck of a fix. Warlocks ooze sex appeal, it’s part of their power. And her coven has assigned her one while she investigates a sudden surge in magically-related feline deaths.

There hasn’t been ritual cat slaying in Charleston in months, so four popping up all at once has alarmed the coven. Libby’s their one and only Enchantress, so that automatically puts her on the case.

But Libby doesn’t have a clue why they’ve set the mysterious Kale to guard her while she figures out what’s going on. She’s sure it’s some kind of test. That they’re looking for an excuse to get rid of her because she’s rubbed them the wrong way one too many times. Make that one dozen too many times.

Even if her mother is one of the Priestesses of the coven, Libby’s sure they’re just checking up on her.

And even her connection with her Goddess tells her that Kale is hiding a whole bunch of secrets from her. If there’s one thing she can’t stand, it’s a warlock playing her. She’s been there and done that, and will fight tooth and claw to keep from going there again.

It turns out that Libby was right about that test. Just very, very wrong about exactly who is doing the testing. And that warlock who played her before…he’s doing it again…just not in the romantic sense this time.

The stakes are much, much higher than that.

Escape Rating A-:This was a fantastic paranormal romance/urban fantasy! The worldbuilding was also really well done. It felt a tiny bit like Buffy, not because they were teenagers, but the whole need to patrol the city to keep evil from getting a toe-hold. That need for “constant vigilance”.

The relationship between Libby and Kale is not just hot, but they have terrific chemistry and I love the unresolved/unrelieved sexual tension that absolutely permeates the whole story. They can’t resolve what they feel because Libby has a ton of issues about warlocks and Kane knows he’s keeping back too many secrets. He wants something real with Libby, and it can’t be real if he’s lying by omission. So he holds back. And she’s completely conflicted. She likes him when he’s honest, but he’s honest so seldom that she doesn’t trust him.

Sex appeal is part of a warlock’s natural “bag of tricks”. Libby can’t always tell whether what she feels is because she’s being played, or because she really feels it. Her caution is totally justified.

The reveal was a complete surprise. Not about who the evil dude was. I guessed that. And I guessed that Libby was being tested for bigger things. But the nature of exactly what things. And exactly how evil evil turned out to be, along with the fact that Libby’s testers had way underestimated pretty much everything was particularly cool. I always love seeing pomposity get popped.

I’m looking forward to more stories in this world. I’m very happy to see that this is labeled as #1 in a series. Bring on brew #2! 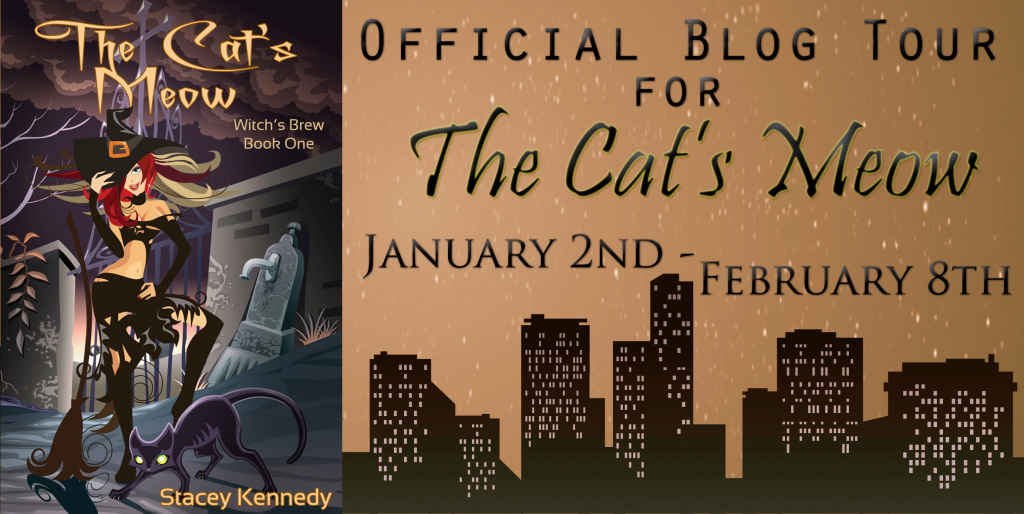 2 thoughts on “Review: The Cat’s Meow by Stacey Kennedy”