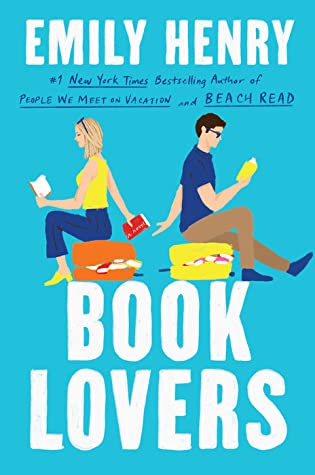 One summer. Two rivals. A plot twist they didn't see coming....
Nora Stephens’ life is books—she’s read them all—and she is not that type of heroine. Not the plucky one, not the laidback dream girl, and especially not the sweetheart. In fact, the only people Nora is a heroine for are her clients, for whom she lands enormous deals as a cutthroat literary agent, and her beloved little sister Libby.
Which is why she agrees to go to Sunshine Falls, North Carolina for the month of August when Libby begs her for a sisters’ trip away—with visions of a small-town transformation for Nora, who she’s convinced needs to become the heroine in her own story. But instead of picnics in meadows, or run-ins with a handsome country doctor or bulging-forearmed bartender, Nora keeps bumping into Charlie Lastra, a bookish brooding editor from back in the city. It would be a meet-cute if not for the fact that they’ve met many times and it’s never been cute.
If Nora knows she’s not an ideal heroine, Charlie knows he’s nobody’s hero, but as they are thrown together again and again—in a series of coincidences no editor worth their salt would allow—what they discover might just unravel the carefully crafted stories they’ve written about themselves.

When it comes to Happy Ever Afters, one size definitely doesn’t fit all – even if a certain ubiquitous type of romance movie leads you to believe it does.

You know the ones I mean, on the channel created by the equally ubiquitous greeting card company, where a City Person™ is forced by circumstance to spend a month (or two) in a (very) small town and discovers true love, happiness and fulfillment in the welcoming embrace of that small town and particularly in the arms of one of the handsomest or most beautiful people who loves the place and everyone in it that all that love converts the City Person into a country person.

This is not one of those stories.

This is a story about the city people that former City Person left behind back in the big city. Because there’s always someone in that city who they were supposed to marry as soon as they got back – which they never do. Whether that other City Person just doesn’t really understand or love them after all, or whether that person is the reincarnation of Cruella de Vil (whether male or female, doesn’t matter), that person who thought they knew where their life was going and who it was going with is left in the lurch, scrambling to put things back together.

Nora Stephens has been that ‘left behind’ person four times now. She’s a highly respected, perhaps just a teensy bit cutthroat book editor who will do anything and everything for her clients – but doesn’t leave much time, energy or effort for herself. She’s been left behind in love so many times that she’s given up on the idea.

The one person in her life that she always makes time for – even if not nearly fast enough or often enough – the one person she loves without reservation is her younger sister Libby. So when Libby entreats, inveigles and somewhat emotionally manipulates Nora into taking a vacation, together, just the two of them, away from Nora’s all-consuming job and Libby’s beloved husband and two little girls, Nora caves. Pretty much instantly. Libby has that effect on her.

Nora can sense there’s something that Libby’s not telling her. And whatever it is, she needs to get to the bottom of it so she can fix it for her sister. Because that’s what Nora always does, one way or another.

Because she can’t fix the one thing that both of them want more than anything. She can’t bring back the mother who died and left her girls behind. So she’ll give everything else instead. Including her own dreams of a Happy Ever After.

Unless, just this once, Libby can fix things so that it’s Nora who finally gets to have it all. While still managing to remain that City Person> But finally a City Person with her very own, fitted just for her, HEA.

Escape Rating A+: I loved this one for all the reasons that made Nora’s HEA seem so impossible to her at the beginning. Because her HEA fits her and doesn’t fit the cookie-cutter mold. And I loved her for it every bit as her sometimes-nemesis (but not really) does. So there’s a reason Book Lovers won so many plaudits and was on so many “Best of the Year” lists and I’m there for every single one of them.

The story is a bit meta, but in a terrific way. It’s a book about romance tropes and a romance between two people who love books, fall for each other, and have a romance that appears to be casting against all those romance tropes, only to learn that they’ve been happening while they haven’t been looking at anything but each other.

There’s also a bit of a relationship fiction/women’s fiction/chick lit story going on very much in the foreground of the story, as the only long-term relationship in Nora Stephens’ life isn’t a romance – because she’s been avoiding those or failing at them (or a bit of both) – right, left and center.

There’s something wrong between them, and Nora knows it but doesn’t know what it is. Libby’s keeping something important from her, but she doesn’t know what that is, either. It’s only when the blowup actually happens that we – and Nora – finally understand why it needed to happen. AND why it had to reach such a huge boiling point so that Nora could finally hear it instead of trying to fix it. That what it’s about is so very real was a big part of why this book was just so damn good.

This is a story with not just one beating heart for the romance, but actually two – one for the romance and one for their sisterhood. It gives the story the kind of balance that it needs to make it work. Because Nora can’t be truly happy unless things are alright with Libby, which can’t happen until Nora stops playing “mom” so she can just live being “sister”.

And then there’s the romance. As much as the romance in this story doesn’t fit a lot of the usual tropes as Nora describes them early on, it does fall very nicely into the enemies to lovers trope. Not that Nora and Charlie Lastra ever were truly enemies. They’re not rivals or competitors in any way. They just met on what turned out to be a terrible day for each of them. Every single word of their entire conversation wasn’t heard without being filtered through their respective miseries. They gave each other good snark but just couldn’t get past their own admittedly terrible crap to see the person on the other side of the table. 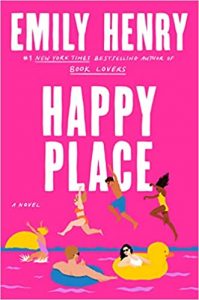 Two years later, unbeknownst to each other, in the middle of trips that they’ve each been separately strong-armed into, they run into each other in the tiny town of Sunshine Falls, NC, to discover that their enmity isn’t really all that strong, but their bantering snarkitude is excellent.

It’s not every couple who gets to say they bonded over truly terrible Bigfoot erotica. But when you’re both book lovers, the bad ones are THE MOST FUN to giggle over. Together. (If there’s any truly great Bigfoot erotica I doubt that either of them would want to know. And neither do I.)

I loved Book Lovers very, very hard. Which means I’m now very much looking forward to the author’s next romance with relationships story, Happy Place. It’s coming in April so happily I don’t have that long to wait!