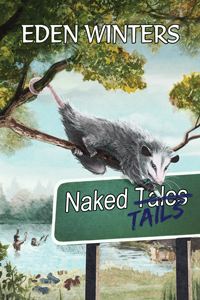 Seth McDaniel wasn’t raised among a shifter passel and has no idea what it’s like to turn furry once a month. An orphan, torn from his father’s family at an early age, he scarcely remembers Great-aunt Irene. Now her passing brings him back to Possum Kingdom, Georgia, to take up a legacy he doesn’t understand and reconnect with a friend he’s never forgotten.

As Irene’s second-in-command, Dustin Livingston has two choices: assume control of the passel or select another replacement. Unfortunately, the other candidates are either heartless or clueless. Dustin’s best hope to dodge the responsibility is to deliver a crash course in leadership to his childhood pal Seth, a man he hasn’t seen in twenty years. However, while Dustin’s mind is set on his task, his heart is set on his old friend.

Seth’s quest for answers yields more questions instead. What’s with the tiny gray hairs littering his aunt’s house? Why do the townsfolk call each other “Jack” and “Jill”? Do Dustin’s attentions come with ulterior motives? And why is Seth suddenly craving crickets?

That smarty-pants possum on the cover tells you right away that this is no ordinary shapeshifter story. No wolves, no big cats, and most importantly for me, no insta-luv based on “finding your one true mate.” These fellas have to work to find their HEA.

And Seth has to work to find his spine. He’s the heir apparent to a band of shapeshifters he has no clue about, and he’s ill-equipped for the task. People run roughshod over him, and it isn’t until he returns to Possum Kingdom, Georgia to discover all he missed in the way of family, friends, and moonlit nights that he starts to stand up for himself.

Seth’s torn between his grandmother, who seems to care about appearances more than Seth’s well-being (although she does raise a small boy by herself when it’s pretty clear this is a major imposition) and his Aunt Irene, who has to balance Seth’s well-being against her passel’s when she decides how hard to fight for a child who’s not in danger of anything worse than living in a city. There are no easy choices, and while the grandmother is not precisely three dimensional, she’s certainly not evil or cruel as much as terrified that the passel will cost her another family member. Irene is a much more loving figure, but she’s cut off from Seth when he’s eight years old.

So twenty years later, when Seth can decide what he wants without his grandmother’s opinions coming first, he’s got to cope with a town of strangers who are all behaving rather peculiarly and his best friend from way back when, who’s never stopped missing him. Dustin’s grown up to be the town doctor and Irene’s second in command become temporary leader, a position he doesn’t want. He can either step up to the pump or find a suitable replacement, and hope he survives the experience either way.

The story spends a lot of time with the possums in their animal form, which is often quite humorous, occasionally dangerous, and sometimes political, and always told in a way that moves the story forward. Seth also needs to learn to be part of the passel, a role he’s thrust into rather more firmly than Dustin could have imagined. Seth hasn’t been shapeshifting all along, but finds he enjoys it once it’s inevitable. “I am the Crickinator!” he exults after a chirpy snack.

In two-leg form, Seth grows hugely as a person, blossoming with the responsibilities that are thrust upon him, but Dustin’s not sure this will be enough to make him a leader. These qualities do lurk within him as dormant as his shapeshifting, but with a little coaching on method, he seems to have a talent for it. Between Dustin and Monica, Dustin’s current second in command, Seth will get whupped into shape one way or another.

The secondary characters are drawn vividly: Monica, Irene, and even the hapless Tiffany have clear personalities. The grandmother’s characterization is heavily tinted by being seen as the adult tyrant through children’s eyes, and it probably isn’t possible for her to be portrayed sympathetically after taking everything important away from young children, no matter what her reasoning. Monica is formidable and not easily won over—she’s a hoot, and I don’t ever want her plotting against me. Seth finds her advice valuable precisely because she doesn’t like him.

The relationship between Seth and Dustin is hugely complicated by the leadership issues, doubts about each other’s motives and sincerity, and the occasional foot planted firmly in mouth. It moves in fits and starts around these other issues. It’s never as simple as “childhood buddies destined to be lovers.” Dustin had to part with his long term lover over shifter politics, which he still regrets, and Seth has an ex who can mess with his mind. Both Seth and Dustin have to learn to see each other as men as much as long ago pals, long term disappointments, and solutions to a problem. No fated-mate handwaving here: it’s a real relationship that has to be built in the current day.

This story is charming for its characters, offbeat shifters, and the author’s clear understanding of small Southern towns, which all come together into a well-balanced read. A couple secondary characters deliver their messages with a slightly heavy hand and a running gag got one repeat past the funny, but that doesn’t keep this story from being a lovely afternoon’s entertainment.