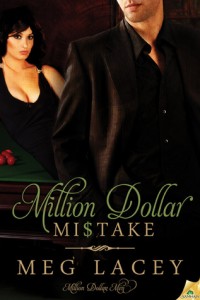 Taking care of business may cost him his heart.

In addition to overseeing the financial affairs of the wealthy Kristoff family, Nicholas Demetrious specializes in hauling its rambunctious members out of trouble. Especially his distant cousin, Raven Rutledge.

The tabloids love her bad-girl antics, sexy pout, and body made for sin. Nicholas would love to spank the bejesus out of her, but this time the situation is too serious to entertain such a fantasy. A lucrative business deal with the Exeters is in jeopardy, and Jackson Exeter Sr.’s ultimatum is clear: Remove this man-eater from my country house, or the deal is off.

Raven is in way over her head. She accepted the invitation to the Exeters’ Adirondack house party as a refreshing change from her jet-setting lifestyle—until she learns the guest list includes his entire family. His ex-girlfriend. And the junior Exeter’s intention to propose.

If ever she needed suave, sophisticated Nicholas’s persuasive powers, it’s now. Then he’s there with a plan to get her out of this tangle: sweep her off her feet. But their pretend passion turns all too real. And what started out as a weekend of fun threatens to shatter into betrayal and heartbreak.

Warning: Contains a tabloid sweetheart who loves to be bad, a sexy hero with little patience for mind games, and a game of strip pool that will make you rethink your weekend plans.

Million Dollar Mistake is two love stories in one, and neither of them ends up being a mistake. But that’s not the way this story begins.

It begins with a boy-man bringing home tabloid trash because he hasn’t gotten over his need to rebel against whatever “Big Daddy” wants him to do.

Tabloid-trash Raven Rutledge thought she was being invited for a skiing weekend with Jackson Exeter–not home to meet his family and their political ambitions for “Junior”.

Raven was just out for a little fun–she doesn’t want to get involved. And she’s not planning to be part of Jackson’s fight with his father. She has enough problems with her own “dear old dad”.

So when her old nemesis Nicolas Demetrius shows up at the Exeter family retreat, she throws herself at him. She climbs him like a tree the minute he comes through the door. Anything to get out of the mess that she’s landed in.

It’s a real mess. Jackson thinks he wants to marry Raven. Raven only wanted to play with him for a while. Meanwhile, there is a woman waiting in the wings who has been in love with Jackson for years, he’s just been too blind to see it.

And Nicholas, he’s really there to seal a business deal with Exeter Sr. A deal that is now contingent on his keeping Jackson away from Raven. He’s discovered he’s more than willing to take that one for the team.

Nicholas’ problem is that in the middle of the game, he realizes that he’s playing for real, and that the business deal he came for is not the most important stake on the table.

Raven and Nicholas’ relationship is hot from the very first moment that Raven decides to use Nicholas’ arrival as her “out” from the pickle that she’s landed herself in. They’ve known each other forever, but have always rubbed each other the wrong way. Four years of age difference as kids is huge, as adults it’s nothing.

But because they have known each other a long time, this doesn’t feel like insta-love, and makes their relationship more believable. They’ve always struck sparks off each other!

The relationship between Jackson and Lorraine needed a bit more work. Lorraine probably thought so too. She’s loved him all her life, but he hasn’t been able to see past the idea that she’s the one his father wanted him to marry. Or he sees her like a sister. I wasn’t sold on that instant change quite as much.

But the character I loved was Nana, Jackson’s grandmother. She was a troublemaker of the best kind. Every story needs a matchmaking grandma like her to stir the pot.

One thought on “Review: Million Dollar Mistake by Meg Lacey”