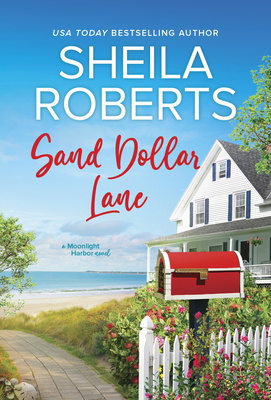 USA TODAY bestselling author Sheila Roberts will have readers laughing and swooning in turn as two rival business owners compete for the homes and hearts of Moonlight Harbor.
Brody Green is finding it hard to recover after being dumped by his fiancée, Jenna Jones, then watching her walk down the aisle with someone else. Jenna is determined to make up for her love defection and find him the perfect woman, but Brody is done with love. First a divorce, then a broken engagement. From now on he’s keeping things light, no commitments. Luckily Brody’s business is booming. Beach Dreams Realty is the best real estate company in town. And the only one. Until…
Lucy Holmes needs a new start. In business, in love, in…everything. If ever there was a cliché, it was her life back in Seattle. She was a real estate broker working with her husband until she caught him trying out the walk-in shower in a luxury condo—with another agent. She’s always been the more successful of the two, and with him gone, she’s determined to build a business even bigger than what she had. Moonlight Harbor is a charming town and it has only one real estate agency. Surely there’s room for a little competition.
Or not. Looks like it’s going to be a hot market in Moonlight Harbor. And maybe these two competitors will make some heat of their own. 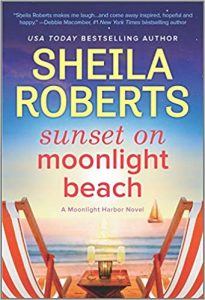 But neither Lucy Holmes or Brody Green are feeling particularly lucky when this story begins – even though Brody already has his own house at the beach in Moonlight Harbor. Brody’s either heartbroken or cheesed off – or honestly a bit of both – that his fiancée Jenna Jones broke up with him in the previous book in this series, Sunset on Moonlight Beach, and married someone else.

Jenna owns The Driftwood Inn, a homey little B&B that seems to be the emotional if not the physical heart of tiny Moonlight Harbor. Brody, the only real estate agent in town and the head of the chamber of commerce, has no choice but to keep running into his ex and her new husband everywhere he turns.

It’s not making the hurt heal any faster, particularly since Jenna is determined to make it up to Brody for following HER heart by finding the perfect person for him to lose his to.

Lucy Holmes left her lucrative real estate business in Seattle behind – along with her marriage – after finding her husband in a cliché – and a naked clinch – with one of their junior real estate agents in a condo that Lucy was showing to prospective buyers. She gets half of everything they built together, both their marital property and their real estate business – but she needs a fresh start.

She discovers Moonlight Harbor, a little town on the Washington coast that looks like its on the cusp of discovery – and only seems to have one real estate agency in position to take advantage of the coming boom. There’s plenty of room in this growing community for two real estate agents. Or there should be. But Brody’s feeling sensitive about everything after losing Jenna, and Lucy is not only feeling sensitive about plenty herself, but NEEDS that fresh start in the worst way to get past, well, her past.

It’s a tiny town. They keep running into each other – and running after anyone in town who looks like they’re planning to buy or sell a house. Their college-age children, Brody’s son Declan and Lucy’s daughter Hannah, can’t seem to get enough of each other – enough of a worry for their parents without adding the Montague and Capulet vibes their respective parents are spreading all over town.

But the sparks that Brody and Lucy throw off every time they lock horns or glances puts the truth in another old saying about what three things kissing and real estate have in common. The guiding principles for both endeavors are “Location, location, location.” 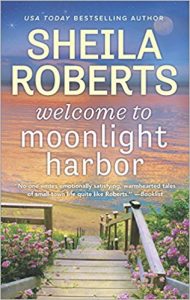 Escape Rating B: Sand Dollar Lane is the sixth book in the author’s Moonlight Harbor series, which began with the fittingly titled Welcome to Moonlight Harbor. I haven’t read the previous books in the series – as much as I loved this author’s Life in Icicle Falls series (my favorite is Merry Ex-Mas) I think this one fell down the “so many books, so little time” conundrum.

I didn’t feel like I was missing any of the plot by not having visited this little town before – there are plenty of hints to catch a new reader right up embedded into the current action. What I think I did miss was being previously invested in Brody Green’s relationship with Jenna Jones. Her ‘torn between two lovers’ dilemma stretches over the first five books and finally ends with her marrying Seth Waters at the end of the fifth book.

So here we are in the sixth book, Jenna is happily married and Brody is miserable. (She seems to be a great person and he really did love her so his misery is completely understandable.) But, and this is where I think I missed something, I didn’t know them so I didn’t feel FOR them when this book started.

So Brody comes off as a bit of a self-absorbed jerk, and Jenna’s continuous attempts to assuage her own guilt over their breakup by awkwardly and obviously trying to match Brody up with every unattached female in their age bracket comes off as weird and intrusive. On the other hand, I’m an introvert and would want to lick my wounds in private, thankyouverymuch. Brody, Jenna and Lucy for that matter are all extroverts. So they might feel differently. Jenna certainly does, but Brody, not so much.

Lucy is every bit as salty about men and relationships as Brody is about women, but she earned it more. At the same time, she really is doing her best – and it turns out to be damn good – to wash that man right out of her hair and move forward with her own life and a fresh start.

That she turns into the Wicked Witch of the West whenever Brody gets when spitting distance is not her usual, but she’s having some trust issues about men who seem to be smooth and charming because that was her ex all over. And Brody seems to be able to turn it on and off at a moment’s notice.

In other words, this is a romance where the adults are squabbling like children on a playground and not actually adulting. It’s their newly adult children who are much closer to adulting. Not that Hannah doesn’t fall off that wagon once or twice in a really big way, but then, she’s at the age where that’s expected behavior.

But very much on my other hand, Moonlight Harbor is a lovely, close-knit community, and the people who live there seem to be utterly charming. While the romance in this particular entry in the series turned out to be not quite my cuppa, I did enjoy visiting here and I really liked the way that Lucy ‘put on her big girl panties’ and moved forward with her life. That part was terrific – even with her occasional partial transformations into Maleficent. (Although I loved the time when she had nightmares about it – not for the nightmare but because the invasion of Disney into her dreamscape was just so well done AND on point.)

To make this long story short, while I may not have fallen in love with the romance between Lucy and Brody, I did fall hard for Moonlight Harbor and would love to come back. And probably will the next time I’m in the mood for life in a lovely place that isn’t that far distant in either miles or mood from my beloved Icicle Falls.