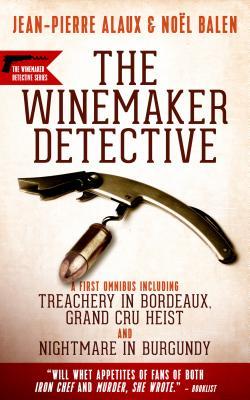 Two amateur sleuths gumshoe around French wine country, where money, deceit, jealousy, inheritance and greed are all the ingredients needed for crime. Master winemaker Benjamin Cooker and his sidekick Virgile Lanssien solve mysteries in vineyards with a dose of Epicurean enjoyment of fine food and beverage. Each story is a homage to wine and winemakers, as well as a mystery. In "Treachery in Bordeaux," barrels at the prestigious grand cru Moniales Haut-Brion wine estate in Bordeaux have been contaminated. Is it negligence or sabotage? In "Grand Cru Heist," Benjamin Cooker's world gets turned upside down one night in Paris. He retreats to the region around Tours to recover. He and his assistant Virgile turn PI to solve two murders and very particular heist. In "Nightmare in Burgundy," a dream wine tasting trip to Burgundy that turns into a troubling nightmare when Cooker and his assistant stumble upon a mystery revolving around messages from another era. This made-for-TV series is "difficult to forget and oddly addictive" ("ForeWord Reviews").

The Winemaker Detective Omnibus combines three books that were originally published separately; Treachery in Bordeaux, Grand Cru Heist and Nightmare in Burgundy. As these are the first three books in what is now a 20 book plus series in the original French, this little omnibus is a convenient way to start on this tasty little series about making wine, living the Epicurean life in France, and murder.

Each of the books in this series is novella-length, so this combined introductory collection makes for a decent book-sized book without being overwhelming. 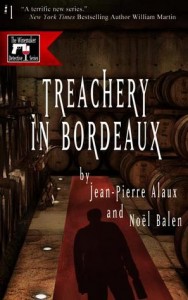 The stories feature the internationally acclaimed Anglo-French winemaker and wine commentator Benjamin Cooker, and his young assistant Virgile Lanssien. Poor Virgile’s job interview opens Treachery in Bordeaux, and he and his new boss are immediately thrust into a tale of wine sabotage, real estate shenanigans and death.

This is a relatively straight-forward case in many ways, with the original crime – what happened to the wine? – relatively easy to guess, both for the reader and the newly hired Virgile. Figuring out whodunnit and even more interesting, whydunnit make the story. The portrait of the winemaking region of France and the processes used to create and preserve the wine and the winemaking business itself are fascinating.

But Treachery in Bordeaux is mostly a book that sets up later stories. Once Cooker figures out the shortlist of who might have done the crime, the wrap-up is quick and almost anti-climactic. We see Cooker agonize much more over writing the next edition of his famous wine guide than we observe him thinking about the case. 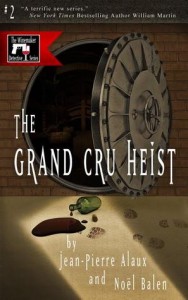 For this reader, Grand Cru Heist was the best of the three stories in the collection. All of the characters and situations are set up in Treachery in Bordeaux, and we see the partnership of Cooker and Lanssien gel. And we see Benjamin Cooker thrown very much out of his element, as we watch him recover from a carjacking in Paris. While he is recuperating in Tours, he runs across a congenial fellow wine collector, a Russian prostitute, and a staged murder-suicide that conceals two murders. Meanwhile back home, a friend’s collection of rare wines is being stolen from auction houses around Europe. And only his friend’s wines, no matter what other treasures are stored in those warehouses.

So while Cooker mourns the loss of his vintage car and his even more precious notes for his next Guide, he finds his recuperation aided by involving himself in both the police investigation and the hunt for a thief. It’s not a complete surprise when that congenial wine collector, the murders and the thefts all turn out to be part of the same messy business. But it is fun. 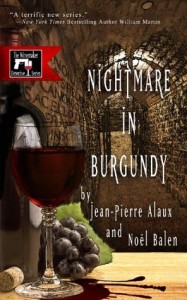 In Nightmare in Burgundy, Cooker is off to Burgundy, a completely different winemaking region than his native Bordeaux. While Cooker is in Burgundy for a wine judging event, he stumbles across a case that takes a very unfortunate turn.

Someone is leaving Biblical verse graffiti, in Latin, painted on the walls and inside the houses of several villages in the Burgundy area. Whoever is leaving the quotes from Psalm 102, it is someone in a lot of pain and obviously not a typical tagger. When the painting spree starts causing collateral damage among the villagers, Cooker steps in to figure out not just who is in such terrible anguish, and causing so much more.

By the time I got to Nightmare in Burgundy, it felt like reading all three stories back to back was too much of a good thing all at once. Perhaps I was a bit hungover from all the wine talk! So while these stories are individually lovely, I would recommend pacing oneself and resisting the impulse to plow through them all at once.

Escape Ratings: Treachery in Bordeaux, B-: Grand Cru Heist, B: Nightmare in Burgundy, B

One thought on “Review: The Winemaker Detective Mysteries: An Omnibus by Jean-Pierre Alaux and Noel Balen”