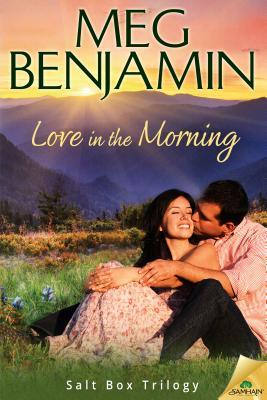 "Breakfast with benefits "
"The Salt Box Trilogy," Book 2
The reality show "Lovely Ladies of L.A." should have launched Lizzy Apodaca s catering company into solvency. Instead, when her carefully prepared appetizers mysteriously gave the cast on-camera food poisoning, she lost everything.
To make matters worse, her car breaks down in Salt Box, Colorado, a town not much bigger than a salt shaker. But maybe her luck is changing the handsome owner of Praeger House, the town s premier hotel, needs a kitchen assistant.
Clark Denham realizes his diamond in the rough is a polished gem when Lizzy steps up to save the hotel s breakfast buffet after his temperamental head chef quits. It isn t long before she s winning his heart as smoothly and efficiently as she runs his kitchen.
Their relationship goes from simmer to rolling boil with the speed of a short order cook. But when a bevy of not-so-lovely ladies shows up in Salt Box, Lizzy s past disaster threatens to flatten her happily ever after faster than a falling souffle.
"Warning: Contains salty dialogue, several servings of high-carb cooking, and a big platter of screaming-hot bedroom delights."" 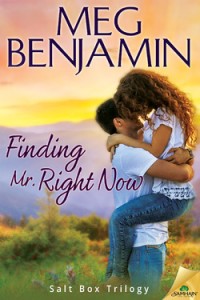 Love in the Morning is the perfect antidote (pun definitely intended) to the first book in this series, Finding Mr. Right Now (reviewed here).

It’s also a lovely reward for having suffered through that first book, but it is not necessary to read the first one in order to get into this second one. There is more than enough background provided to transport readers to Salt Box without having to go through the production of Finding Mr. Right, which is awesome for those of us who are not into reality TV shows.

Not that a different reality TV show doesn’t rear its ugly head in Love in the Morning, but in this case, the heroine, and the readers, get their revenge on the industry. And it feels every bit as marvelous as the romance in this book.

In Love in the Morning, the heroine is Lizzy Apocada, She’s a chef, or she was. Unfortunately for Lizzy, her cousin Teresa the family diva is one of the Lovely Ladies of L.A., which is an even shoutier version of The Real Housewives of Wherever. And Teresa ropied her cousin Lizzy the chef into catering a party at her house during the filming of an episode of the not-so-lovely Ladies.

Someone poisoned the food, and the episode ends in a whole lot of overdressed people barfing on camera. Lizzy’s reputation was ruined, her business went bankrupt, and those lovely Ladies rehashed her supposed dastardly deed for weeks.

It was a big ratings boost for the series, and it completely ended Lizzy’s life as she knew it. So she takes her crappy car and heads East from L.A., hoping to outrun her problems. She runs out of gas just as she reaches Salt Box, Colorado, so that’s where she stays.

And that’s where the fun begins. She lucks into a kitchen’s assistant job in the best bed and breakfast in town, the Praeger House. And when the temperamental chef suddenly takes herself off to a better job in Aspen, Lizzy finds herself in charge of a kitchen again, and finally back in her element.

She’s just waiting for the other shoe to drop, for someone to recognize that Lizzy Apodaca and Annalisa Antonio one and the same person – the person who gave the cast of Lovely Ladies food poisoning. Then she’ll have to move on.

But not before the hunky owner of Praeger House, Clark Denham, makes a move on her. One that she has been secretly hoping for and is happy to reciprocate. Now that she’s involved with Clark, she has two reasons for hoping that her past takes a long time to catch up with her.

Then the Lovely Ladies come to town to film an episode at the nearby resort, and Lizzy is certain that her days in Salt Box are numbered.

Escape Rating A-: I think I liked this one so much because it fulfills a revenge fantasy. Not just Lizzy’s revenge on the production of the Lovely Ladies, but also my personal revenge fantasy at just how much I hated the setup for Finding Mr. Right Now. (I liked the hero and heroine, I just wanted to get them out of their toxic jobs ASAP)

It is lucky for Lizzy that she lucks into that kitchen assistant’s job, but it isn’t too far out of the realms of possibility. Having lived somewhere with that kind of issue, that people skilled in a particular field may be thin on the ground, I can see it happening all too easily. Especially in this situation, where the person who could have been training people is a jerk looking for a way out of smalltown-ville.

The main story is two-fold. One part of it is the development of Lizzy’s romance with Clark. They start out as boss and employee, but just barely. Clark is not exactly a traditional boss, and he’s as bowled over by his reaction to Lizzy as she is to him. Neither of them is looking for a relationship, and it knocks them both sideways when it happens. While this situation could have been skeevy, it just so isn’t. Especially since Lizzy figures that she can’t possibly stay in Salt Box, no matter how much she likes it.

But the bigger story, at least for this reader, is the re-growth of Lizzy’s confidence. She starts at the lowest possible point, as she says at the beginning, “this may not be the bottom, but you can see it from here”. While her life seemingly has no where to go but up, it is Lizzy’s willingness to reach for the opportunities presented to her that lift up the story. Each time there’s a chance to advance or retreat, Lizzy keeps moving forward. With some trepidation, but always forward.

Lizzy finds happiness and professional satisfaction because she reaches out and grabs them with both hands, and she deserves them.

The last part of the story is the revenge fantasy. Lovely Ladies of L.A. is produced by the same cheesy production company as Finding Mr. Right. They had a “great time” at the resort up the road from Salt Box, so they decide to come back, with the Lovely Ladies this time. The stage is set for a showdown between Lizzy and her diva cousin Teresa. The result is surprising, and surprisingly awesome.