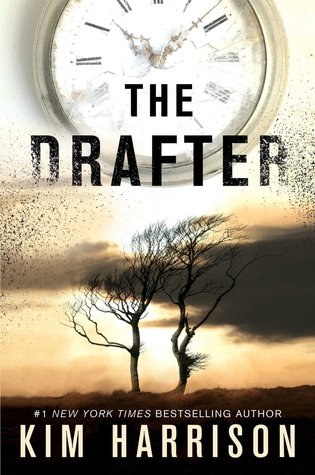 Detroit 2030. Double-crossed by the person she loved and betrayed by the covert government organization that trained her to use her body as a weapon, Peri Reed is a renegade on the run.
Don’t forgive and never forget has always been Peri’s creed. But her day job makes it difficult: she is a drafter, possessed of a rare, invaluable skill for altering time, yet destined to forget both the history she changed and the history she rewrote.
When Peri discovers her name on a list of corrupt operatives, she realizes that her own life has been manipulated by the agency. She joins forces with a mysterious rogue soldier in a deadly race to piece together the truth about her final task, unable to trust even herself.

Years ago, a friend recommended Kim Harrison’s Hollows series, starting with Dead Witch Walking. I should have loved it. Ironically, it is set in the Greater Cincinnati area, where I grew up. So I even knew the place. But it just didn’t work for me. I still have the books, thinking I’ll get back round to it someday.

Fast forward to last year, when The Drafter came out. As this was the first book in a new series, it felt like time to give Harrison another chance. But I never got around to it. So when a tour came around for the paperback release of The Drafter, I decided to give it a go. And here we are.

The story is set in a kind of post-urban apocalypse Detroit in 2030. Not that the rest of the U.S. has suffered any kind of apocalypse that we know of. In this series, Detroit is just post its very current situation of urban decay and infrastructure collapse and out the other side to a new and resurrected high-tech city erected on the ashes of the old steel and asphalt core. It’s an interesting idea.

(For another story that takes a completely different tack to the seemingly inevitable fall of Detroit and what rises from its ashes, check out Rachel Aaron’s Nice Dragons Finish Last.)

But back to this version of Detroit and this story.

What if a human being could be their own personal TARDIS? Not that Peri Reed physically takes anyone with her when she “drafts”, but she does jump back in time, just a tiny bit. And when she does, she rewrites history. Unfortunately for her, once the history is rewritten she has to be made to forget the original timeline, or she’ll go crazy.

Drafting is a highly-prized talent, because it is so rare. She can bring about any outcome her handlers want, while erasing the evidence and most of the consequences. She never remembers whatever she did. But Peri is a puppet who doesn’t really know who is pulling her strings. Or she’s a prize-winning bird in a very, very expensive gilded cage. Or a little bit of both. And when she begins to unravel the truth about herself and her puppet masters, all they have to do is make her rewrite the scene where she figures everything out, so they can make her forget all over again.

What are you guilty of if you never remember what you did or why you did it? Is Peri culpable for all of her actions, or is she just the weapon, with her trigger pulled by someone else? And why should she care?

Escape Rating B: It’s the why should she care question that ends up haunting both Peri and the reader. This reader, however, was also left with the question of “why should I care?”, while at the same time unable to forget this story.

Peri is a very, very unreliable narrator for her own life. While we all forget details of our lives over time, Peri is forced to forget weeks, months and even years of her own life, reset back to zero whenever she gets to close to the truth about the organization that uses and sometimes abuses her.

Her entire world is one big lie, and every time she gets close to the center of that lie, she is forced to forget that she ever knew. The devastation wrought by all those resets is hard to imagine. It’s always a wonder that Peri hasn’t gone off the deep end. And the fear of that outcome haunts her at every turn, and is used both to push her into situations she does not want, and to control her when she tries to go her own way. Peri may be a perpetrator, but she is also a victim. And we can never be sure how much she has consented to, and neither can she.

The story here is about Peri’s latest attempt to get to the truth, and then get out with her life and whatever is left of her memory and sanity. Two factions are fighting over her body – Opti, a corrupt government organization that sells Peri’s services to the highest bidder, and The Alliance, an only slightly less corrupt organization that wants to expose Opti and its operations for reasons that are not entirely clear. It’s not that Opti should not be exposed, because they certainly should – it’s that The Alliance and its agenda may not be a much whiter hat in the end. Merely a less dark shade of gray. The individuals on both sides of this equation are amoral operators who see Peri and her talents as just means to their ends. And both feel that their ends justify any means at all.

There’s a bigger mystery at the heart of the book. From Peri’s perspective it’s impossible to tell which side everyone is on. She can’t remember anything from her own past, and everyone seems to be out to wipe her memory and use her again. She’s also finally realized that many of her fears and much of her conditioning are designed to keep her mentally weak and dependent on her handlers, just so she doesn’t figure out what she’s really capable of or what she can really do.

But at the end, there are very few people in this story that the reader can root for. All of the operatives and all of the undercover agents for all of the various factions have all “gone native” to one degree or another. No one has clean hands.

As this story wound down to its conclusion, I found myself caught up in the tension and fast pace. I desperately wanted to get to the heart of the mystery and see how everything finally resolved itself. But at the same time, I found myself not really caring for any of the players. There are no heroes here, only lesser and greater villains.

One thought on “Review: The Drafter by Kim Harrison”