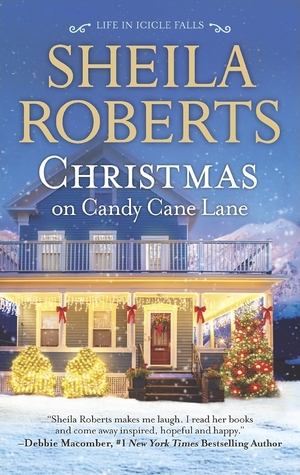 Icicle Falls is the place to be at Christmas…
Everyone's getting ready for Christmas in Icicle Falls, especially on Candy Cane Lane, where holiday decorating is taken very seriously. Tilda Morrison, town cop, is looking forward to celebrating Christmas in her first house… until she discovers that she's expected to "keep up" with the neighbors, including Maddy Donaldson, the inspiration behind the whole extravaganza. But this year, someone's destroying Maddie's precious candy canes! Thank goodness for the cop in their neighborhood.
Tilda already has her hands full trying to sort out her love life and fix up her fixer-upper. Oh, and won't it be fun to have the family over for Christmas dinner? Not really… Then there's her neighbor, Ivy Bohn. As a newly single mom, Ivy can sum up the holiday in two words: Bah, humbug. But she's determined to give her kids a perfect Christmas.
Despite family disasters, irritating ex-husbands and kitchen catastrophes, these three women are going to find out that Christmas really is the most wonderful time of the year!

This is a story about what happens when you live next to the Griswold family from National Lampoon’s Christmas Vacation. Or at least you feel like you do. When the plastic trappings of Christmas become way more important than any spirit of Christmas whatsoever, you have a recipe for disaster. And comedy.

This entry in the Life in Icicle Falls series is set on Candy Cane Lane, and one of the story threads follows the woman who makes it all happen. Literally. Maddy Donaldson is the person who petitioned the village to change the name of the street to Candy Cane Lane in the first place, and she’s the person responsible for making sure that every resident has their holiday lighting display dialed up to 11. She’s also the cheerleader and organizer who schedules every single woman on the street to serve as Mrs. Claus, standing out in the cold and snow and giving away free candy canes to the carloads of mostly local tourists who come to see Candy Cane Lane in all its electric glory.

(There are plenty of real places that do Christmas to the nth degree the way that Candy Cane Lane does, The Sauganash neighborhood in Chicago is fairly famous, or infamous, in the Chicagoland area.)

But Mandy is so busy organizing the neighborhood, whether they like it or not, that she doesn’t see how often she breaks promises to her husband and daughter in order to play Mrs. Claus or chivvy the neighbors into more holiday spirit. If some of those neighbors are turning to other types of holiday spirits in order to avoid her, she misses that, too.

Mandy isn’t the only woman on Candy Cane Lane having a little difficulty seeing the Christmas around her. Ivy Boch is spending her first Christmas alone. Last December 26, her husband said he’d had enough of being tied down, and left. Now they are sharing custody of their two little kids, and sharing a rather separate misery. Their daughter has written to Santa that all she wants for Christmas is her Daddy back home. Ex-husband Rob has finally figured out that he was a jerk and an idiot, and wants to come home. But Ivy isn’t sure she can trust him again, and who can blame her?

Icicle Falls Police Office Tilda Morrison has just bought a fixer-upper house on Candy Cane Lane. Her love life is non-existent, and she’s decided to quit waiting and just get on with her life. One problem is that her fixer-upper needs way more fixing up than she thought. Her second problem is that one of the local bad boys, Devon Black, would love for Tilda to take him on as her very own personal handyman and fixer upper. And if that wasn’t enough, her new neighbors expect her to solve the sudden rash of Christmas decoration vandals that is ruining everyone’s Christmas displays, right along with Mandy’s and Tilda’s Christmases.

Something needs to change on Candy Cane Lane, or no one is going to have a very merry Christmas. 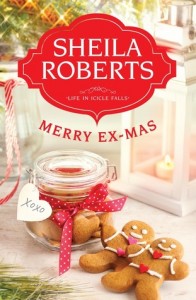 Escape Rating B: Just like the previous entry in this series, A Wedding on Primrose Street (reviewed here), Christmas on Candy Cane Lane reads more as women’s fiction than it does a romance. The emphasis in this story is on women’s friendships and women’s relationships, including the fractured relationship between Maddy and her daughter, the tenuous friendship that grows up between Ivy and Tilda, and Tilda’s loving but sometimes contentious relationship with her mother Dot.

Also like a previous holiday entry in the series, Merry Ex-Mas (my personal favorite in Icicle Falls), the women are dealing with the men in their lives at very different stages in those relationships. Maddy and Alan are harried but generally happy with each other; Ivy and Rob are divorced but nothing has been resolved, and Tilda and Devon are still dancing around whether they will have a relationship or not.

Each of the women is in the middle of a crisis. Maddy’s daughter Jordan has become a teenager with a vengeance, and their formerly good relationship is strained by Jordan’s mood swings and increasingly bad attitudes. Ivy is having a meltdown between managing her shop, taking care of her kids, and feeling lonely and stressed to the max. Tilda is worried about her mother, who ends up in the hospital, and has a never-ending series of house-related messes.

Seemingly no one is perfectly happy. But they all get through, often by helping each other. And in the end, they each find out what is really important at Christmas. And the rest of the year.

One thought on “Review: Christmas on Candy Cane Lane by Sheila Roberts”