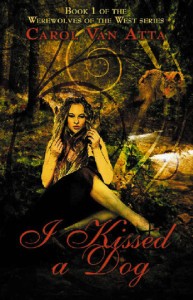 Chloe Carpenter isn’t like other women. She can communicate with animals, a gift she unwrapped following one of her frequent dances with death.

In her otherwise wacky life, she’s finally found a semblance of sanity working at the Plum Beach Wildlife Park, where her unique talents can make life or death differences for the animals in her care. That semblance is shattered when a new veterinarian roars into the park in his spiffed up sports car and sets his golden gaze on her. If she had her way, he’d roar right back out.
Problem: He’s her new coworker and he’s saved her life twice – in the past twenty-four hours.

Zane Marshall, Enforcer for the Pacific Pack of purebred werewolves, has a job to do – figure out who or what is mutilating the young men of Plum Beach.

With orders to find the woman who talks to animals, he accepts a position working alongside the fiery Chloe Carpenter, a female who ignites his interest far more than he ever expected.
Remarkably, she’s the one elusive female with potential to bring meaning and passion to his empty existence.
Problem: She despises him.

Together, they’re forced to unravel a mystery of supernatural proportions, a murderous mystery with eternal implications for everyone. In the process, they discover opposites really do attract.
Major Problem: Zane is pledged to another woman, and she’ll do anything to keep him from Chloe.

If you are looking for a series to fill the Sookie-sized hole in your reading life, you might want to check out Carol Van Atta’s new Werewolves of the West series. Chloe Carpenter, at least in her first appearance in I Kissed a Dog, bears more than a passing resemblance to a certain telepathic waitress from Bon Temps, Louisiana.

Chloe wasn’t born the animal psychic. There was a nearly tragic incident–with a fence, and a doberman, and a swimming pool. Instead of dying, Chloe ended up with this “gift”. Let’s call it a mixed blessing.

She’s great at helping animals. When they’re sick, they really can “tell her where it hurts”. Vets love her. On the other hand, finding out from her ex-boyfriend’s cat that he was a cheating hound was pretty traumatic.

Now she works for a wildlife park as a kind of animal whisperer. Her boss knows about her talent, but it’s somewhat of a mixed blessing for the park, too. Chloe’s not a vet, and they need to call one whenever she finds a sick animal.

That’s where Zane Marshall comes in. He is a vet. He’s also the pack enforcer for the Pacific Pack werewolves. He’s looking for Chloe, because his pack needs her animal telepathy services. He isn’t counting on her ability to read him!

Zane is the first “human” Chloe has ever been able to read, confusing her no end. The revelation that all too many of the mythical creatures she has read about are real knocks her world for a complete loop.

Zane and his friends need Chloe to help them investigate a threat to their pack, but there is also a serial killer on the loose who is murdering men in Chloe’s small town, and the two cases just might be connected.

Oh, and Zane’s intended mate thinks that Chloe is in her way, and plans to eliminate her any way she can. The messier, the better. Ouch!

Escape Rating B: There is definitely a resemblance between the early Sookie and Chloe, particularly if you wanted Sookie to pick Alcide.

Chloe starts out as an innocent. Very innocent, she’s a virgin! Her parents were extremely protective. I’ll say over-protective, and a lot of those lessons stuck. Also, like Sookie, her telepathy causes her some relationship problems. There are other similarities between Sookie and Chloe, but revealing more goes deeply into spoiler territory.

However, Chloe’s ability to talk to animals is not just different, it’s cool. The animals do talk back. And they generally love her for paying attention and taking care of them.

Zane and Chloe’s relationship starts out with a huge misunderstandammit and continues through one right after another. These two never seem to be straight with each other. And there is a giant insta-lust thing going on, although I hesitate to call it insta-love, combined with the werewolf fated-mating-bond trope. The amount that these two kept secrets from each other means that their love story needs some more fleshing out, or more trials and tribulations, before I’ll totally buy into it.

I did get fooled by who the villain was, and I stayed up way too late on a work night to finish the book.

One of Chloe’s biggest secrets leads to a potential love-triangle that caused the book to end on a jaw-dropping cliffhanger. This story absolutely requires a sequel, so it’s a good thing that it is book one of a series. I can’t wait to find out what happens next! 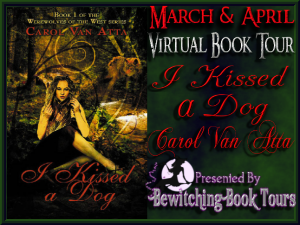 2 thoughts on “Review: I Kissed A Dog by Carol Van Atta”