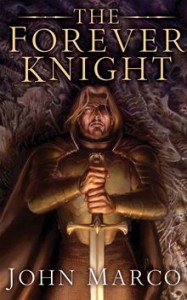 Lukien is the Bronze Knight, beloved by his kingdom and renowned in battle throughout his world. After betraying his king and losing his beloved, he wishes only for death, but rather than die, Lukien is given a chance for redemption: to be the protector of the Inhumans—those fragile mortals who live deep in the desert, far from the prying eyes of their world. These remarkable individuals have been granted magical powers in exchange for the hardships and handicaps life has handed them. And Lukien, now immortal himself, must be their champion. But how can one man, even an immortal warrior, protect hundreds from a world of potential enemies?

Reboot and redemption, keywords for The Forever Knight.

Don’t let the fact that this is book 4 in the Bronze Knight series deter you from reading this book! Lukien, the Bronze Knight of the series, drops just enough hints about the past that he’s trying leave behind that unfamiliar readers seldom feel lost in the sands of time.

Not that what Lukien does reveal about his past doesn’t sound plenty interesting, because it does. I’d like to go back sometime and learn more. But he does tell readers enough so that I felt teased but not befuddled.

Lukien has fought someone or something (or lots of both) for all of his life. He brought peace to the kingdom of Jador, but at a high price. Cassandra, the love of his life, died along the way. He hopes that someday, he’ll join her in the land of the dead. But not for a long, long time. Lukien is virtually immortal, his life sustained by the spirit in his sword, the Sword of Angels.

Jador is at peace, but it is an immutable law that warriors with nothing to fight tend to get restless. So the ruler of Jador sends Lukien out as a knight-errant. And Lukien, stubbornly refusing to listen to reason, takes the young girl Cricket as his squire on a dangerous journey to a place known as the Bitter Kingdoms.

Malator, the spirit of Lukien’s sword, knows that Lukien’s mission is a test. The mission is one that will teach Lukien about the being that he has become, but it leads through death. Kingdoms of death, monsters of death and battles with death and that lead to even more death.

Places generally are not given names like “Bitter Kingdoms” without reason.

Lukien is not ready to face who he has become. He is a leader who will change the face of the world. No one, and nothing can be allowed to stand in his way.

But he is also doomed to walk alone. A lesson he will have to learn over and over again.

Escape Rating A-: The Forever Knight is Lukien’s journey. We see all the action from inside Lukien’s head, and it’s a pretty bleak place to be. Lukien is not, as the phrase goes, a “happy camper”. I don’t think that state of being exists in his world view.

Lukien is a man looking for a mission. He’s immortal and he needs something to fill his time. Lots of time. The spirit of the sword, Malator, has a mission for him, but Malator seems to be the king of “I’ve got the secrets”. Malator only speaks in riddles. Lukien wants everything clearly laid out. They argue. A lot.

The person who gets caught in the middle is Cricket. She’s restless in Jador because she can’t remember her life before she became a refugee. She’s attached herself to Lukien and doesn’t relate well to others. They are both outsiders. He brings her along on his knight-errantry as an act of kindness, but also so he won’t be lonely on the trip. She’s his light in the darkness. Of course, that light gets snuffed out.

This is a transformation story. Lukien has to change to be ready for the next phase of his journey. Poor Cricket is part of the price of that change. Damn it.

3 thoughts on “Review: The Forever Knight by John Marco”