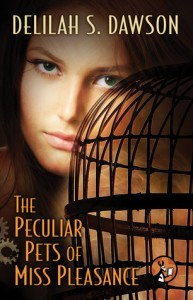 In a world ruled by blood, live pets are rare and kindness rarer still. London pet shop owner Frannie Pleasance has a mysterious way with animals and keeps her charges (and heart) locked in a veritable Eden. She thinks Casper Sterling is just another stray…until she takes in the troublesome lodger (and unwelcome suitor) and becomes the victim of a series of strange and dangerous occurrences.

When an unexplained fire threatens to destroy Frannie’s carefully guarded world, firefighter Thom Maccallan is there to extinguish the blaze and help gather the lost creatures. The heat between Frannie and Thom begins to burn,but someone’s still after the lady. Could it be Casper himself, or is Frannie’s new lodger just another victim of fate? Will they be able to figure out who’s pursuing Frannie—and stop them—before she loses everything?

As a reminder of all things Blud, The Peculiar Pets of Miss Pleasance is a treat. It also serves as a re-introduction to Casper Sterling, Tish’s failed suitor from Wicked as They Come, since that unlucky gentleman will be the hero of Wicked As She Wants.

Casper, last seen leaving Criminy’s circus in a rather despondent mood, doesn’t appear any too well when Frannie Pleasance finds him in a London gutter. The first thing he does is yark all over himself. Then he discovers that he’s been rolled and has neither wallet nor luggage.

In a city crawling with bludrats, being left for dead could have had worse consequences. He would have been dead quite soon.

Frannie takes Casper home with her. She picks up stray animals, and thinks he’s another one. And, he looks just like her brother. Her dead brother.

But Casper Sterling is NOT a stray. He’s “The Maestro”, the greatest harpsichord player that this version of London has ever seen. He’s also a drunk, and a user, and someone wants him very, very dead.

Frannie Pleasance just owns a pet shop. She takes in stray pets that wander through from our world to Sang and finds homes for them. She keeps them safe until she finds the right place for them.

But accidents start happening. Her house catches fire. Then fireman Thom Maccallan comes in to put out the fire in the house, but starts a whole new fire in Frannie.

Can her fireman get to the bottom of the mystery before Frannie and her precious pets all wind up dead?

Escape Rating B: This was fun but not as absorbing in and of itself as The Mysterious Madam Morpho (see review). It hinges too much on the need to re-introduce Casper and the mystery surrounding whatever he’s doing to himself. He’s doing something and we’re teased about it, but we don’t find out the consequences until well into Wicked As They Come.

I’d have enjoyed this more if the story had focused on Thom and Frannie. Their love story was sweet and sensual and didn’t need Casper’s business in particular.  Alternatively, there needed to be more resolution, which of course we can’t get because that’s the next book. Which I’m glad is here. Wicked As They Come was fantastic so I’ve been on pins and needles for Wicked As She Wants for months!

(Your patience will be rewarded. My review of Wicked As She Wants will be posted later this morning.)