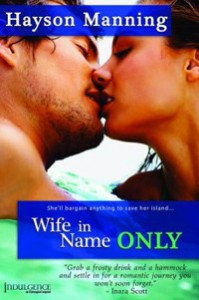 Trapped in a loveless marriage, Zoe Hughes escaped to make a new life for herself on the tiny island of Tonga. Now she runs a successful boutique honeymoon resort. Selling true love is easy. No one needs to know she’s married in name only. At least until America’s premier honeymoon magazine wants to publish a feature on her perfect marriage. Now she must convince her estranged husband to rip himself away from plotting corporate takeovers in LA to save her island paradise.

Rory agrees to come for forty-eight hours, but only because he needs the positive PR. To his surprise, the wife he finds in Tonga isn’t the same woman he married. Now she’s so much more…

When a storm strands Rory in Tonga, will he win back his wife or leave paradise empty-handed?

I wanted to read something quick and fun, so I picked Wife in Name Only from my TBR stack, and it definitely filled my need for something light, sexy and with a sweet HEA at the end. There was just the right touch of suspense to add spice to the mix!

Tonga sounds like the perfect place for a romantic getaway. It’s far, far away from everything, and even cell phone service is erratic. Internet, forget about it! The satellite connects, sort of. Sometimes. When it feels like it. On island time.

It’s the perfect place for Zoe Hughes to sell true love in her boutique honeymoon resort.  That is, until the premier honeymoon magazine contacts her wanting to do a feature spread on her perfect resort and her equally perfect marriage.

There’s one “hitch”–Zoe’s marriage is far from perfect. She came to Tonga to escape her “dead” marriage to “Ice Man” Rory Hughes, who had become so enmeshed in his mergers and takeovers business back in Los Angeles that he had forgotten when they used to be enmeshed in each other. She wondered how long it had taken him to notice that she was gone!

Now she needs Rory to come to Tonga for the photo shoot, and it turns out that he needs her. Being the “Ice Man” is having some negative business repercussions. It turns out that no one, not even in cutthroat LA, wants to make deals with a man who can’t even pretend not be a bloodthirsty predator.

So Rory agrees to come to Tonga, just long enough to do the magazine spread. He thinks he can talk her out of her “foolishness” and get her back to LA. Zoe knows that Tonga is her forever home. There is nothing for her back in LA, especially not the Rory that she left.

But it’s hurricane season in the Pacific, and Rory gets stranded in Paradise for 10 whole days (and nights) with the woman that he still desperately wants. A woman who wants the man he used to be, before L.A. turned him into a shark.

Can the islands work their magic, before it’s too late for their marriage? Or will the hurricane do them both in?

Escape Rating B: I liked Zoe a lot. She was a small town girl who married the man she loved and finally put on her big girl panties when she realized that he wasn’t that man anymore. She made her own dreams come true. She still wanted Rory, (he was gorgeous, who wouldn’t?) but she didn’t love the man he had become. So when she recognized that things weren’t going to get better if she stayed, she went.

On the other hand, I wanted to beat Rory with a “clue-by-four”. He was kind of a jerk. I know the point of the story was how hard it was for him to stop being a jerk, but maybe Zoe forgave him a little fast. Or something. I wanted to see him beg a little more.

Zoe and Rory were smoking hot together. Their chemistry was intense, and it was so clear from the beginning that they had serious unfinished business to resolve, not just sexytimes to play.

There was also a bit of a suspense element. While it provided the reason for Rory’s epiphany, I’m not sure it was otherwise explained enough. But I still enjoyed the heck out of Wife in Name Only, and I’ll be looking for more from Hayson Manning.

One thought on “Review: Wife In Name Only by Hayson Manning”