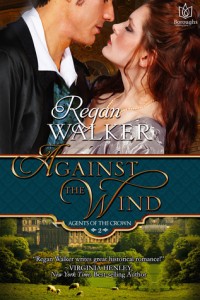 A night in London’s most exclusive bordello. Agent of the Crown Sir Martin Powell would not normally indulge, but the end of his time spying against Napoleon deserves a victory celebration. Yet, such pleasure will not come cheap. The auburn-haired courtesan he calls “Kitten” is in truth Katherine, Lady Egerton, a dowager baroness and the daughter of an earl as elusive as she is alluring. She flees a fate worse than death. But Martin has known darkness, too, and he alone can touch her heart—as she has touched his. To the English Midlands they will steal, into the rising winds of revolution.

When we think of the Regency, we think of ballrooms, the haut ton, and young ladies worrying about whether or not they will be considered diamonds of the first water or whether they will be wallflowers.

We don’t consider that the Regency was also the period of the Napoleonic Wars. Or that after the end of the Wars, in 1815, a lot of veterans returned from the continent to find that there were no jobs. Sound familiar?

Also the Regency saw the beginnings of the Industrial Revolution. In addition to the returning war veterans, many textile workers were put out of work by machines. Poverty was widespread, and politicians feared a revolt of the masses in England, similar to the French Revolution.

The government decided to find out who the traitors might be by inciting them. Agents provocateurs were sent out to foment rebellion, so that the rebels could be spied upon and arrested.

This is the backdrop for Against the Wind. Sir Martin Powell is an English agent with a French background, formerly employed by the Prince Regent as a spy against Napoleon. He’s asked to perform one last service for his Prince. He’s asked to spy on those agents provocateurs, to see just how far the government is willing to go to incite rebellion.

Prinny’s ministers are planning to use the revolt as an excuse to enact even harsher laws than the ones already in place.

Martin takes this one last assignment, but before he does, he gets married. Again. And again he has a hostage to fortune.

While he was a spy in France, he had a wife he loved. Who was killed. And Martin never knew whether she was murdered by a random footpad, or whether the shot was meant for him.

This time, he marries to protect the woman from an evil bastard who is chasing her. But because he will not tell his second wife any of his secrets, he is no more able to protect her, or give her the knowledge to protect herself, than he was his first wife.

Martin’s nightmares come true. Again. But this time he might have a second chance.

Escape Rating B: The history behind this romance is very well done. The period of the early Industrial Revolution that is covered by this story was the first time that the word “Luddite” was used, and doesn’t that still have resonance? The Luddites, named after Samuel Ludd, were revolting against the use of machines to replace textile workers.

The economic plight of the Midlands village is well-drawn and so heart-breaking. It’s easy to see why people took up arms, especially when you compare their lives to the popular Regency romance. If this was how most people lived, then the balls at Almack’s seem excessively wasteful in comparison.

About the romance, Martin and Kit start off with a sexual encounter, then build an emotional relationship. They have chemistry from the beginning, but Kit wants to have a real relationship with her new husband, even if it’s just friendship and mutual respect.

There were one too many problems that needed to be tied up at the end. Kit is willing to marry Martin because her evil brother-in-law is stalking her. (Her sister is dead, he’s evil but not planning on a harem). Martin and Kit also have the problem that Martin is spying on the government agents but keeping her in the dark about it, and she doesn’t know if he’s part of the rebellion, or what he might be doing. The political plotting and counterplotting was fascinating, and highlighted Kit’s and Martin’s need to develop more trust in each other. A lot of their interpersonal problems and a big part of the plot hinge on them not trusting each other with their secrets. Admittedly, Martin’s spying for the government is a pretty huge secret!

And then there’s the evil brother-in-law swooping in. He added a melodramatic element to the conflict that felt like “one cook too many” to the pot. I was very glad to see him get his totally just desserts, but his part in the drama felt unnecessary. Martin’s espionage and the government drama was plenty of meat for this story! 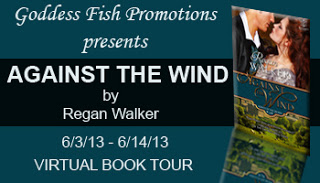 2 thoughts on “Review: Against the Wind by Regan Walker”