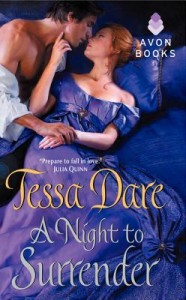 Welcome to Spindle Cove, where the ladies with delicate constitutions come for the sea air, and men in their prime are… nowhere to be found. Or are they?

Spindle Cove is the destination of choice for certain types of well-bred young ladies: the painfully shy, young wives disenchanted with matrimony, and young girls too enchanted with the wrong men; it is a haven for those who live there.

Victor Bramwell, the new Earl of Rycliff, knows he doesn’t belong here. So far as he can tell, there’s nothing in this place but spinsters… and sheep. But he has no choice, he has orders to gather a militia. It’s a simple mission, made complicated by the spirited, exquisite Susanna Finch—a woman who is determined to save her personal utopia from the invasion of Bram’s makeshift army.

Susanna has no use for aggravating men; Bram has sworn off interfering women. The scene is set for an epic battle… but who can be named the winner when both have so much to lose?

The “bluestocking meets her match” is one of the staples of Regency romance, but Spindle Cove may be the first time I’ve read about an entire village filled with that particular breed of heroine.

It makes for a very different type of Regency setting to read about a woman who is not only uninterested in balls and the gossip of the ton, but one who has created a haven for other women like herself, those who don’t quite fit into society’s expectations.

Susanna Finch is anachronistically ahead of her time, but in a way that makes her point of view an interesting and sympathetic way for the reader to view her world. We understand what makes her need to have a purpose to her life, why she wants meaningful work. She’s more like us than her normal contemporaries would be.

But she’s a complete vexation to Lieutenant Colonel Victor Bramwell and the men who follow him. Bram has been tasked with creating a militia company to defend Spindle Cove against the potential of invasion from Napoleonic France. The extremely unlikely invasion. Almost as unlikely as Bram finding two-dozen men for a militia company in a town commonly known as “Spinster’s Cove”. Susanna Finch’s managing ways have driven off most of the men.

On the other hand, the women who have flocked to her “ladies’ retreat” are keeping the town economically afloat. The town needs her.

Bram needs to prove he can raise that troop, to prove that the rifle ball he took to his knee did not rob him of the ability to command, even though being a commander of infantry means that he needs to be able to march miles with his men. His need to be back in the fight spurs him on.

Susanna’s father, Sir Lewis Finch, has promised Bram that he will make sure he gets his command back if he makes a success of the militia. He can make that promise, he is one of England’s foremost artillery experts and has a lot of pull with the Army.

But Sir Lewis has a habit of making promises in order to manipulate people. Sir Lewis wants to play with a new cannon design, and he’s using Bram’s militia company as an excuse to invite a clutch of dignitaries to the scene.

Sir Lewis also promised Susanna that he won’t experiment with cannons again. His promises to her are often broken.

The invasion of Bram and his men has ruined the peaceful feminine haven that Susanna has created. He thinks he’s there just long enough to get his command back. She thinks she can heal whatever is wounded inside him.

The sparks they light together are way more explosive than anything her father’s cannon will ignite, and just about as troublesome.

Escape Rating B: I’ve heard so many marvelous things about this series, that I finally picked it up, and I’m glad that I did. Spindle Cove is a neat place, where the misfits of very structured Regency society have a chance to be themselves. Too bad something like it probably didn’t exist.

Susanna and Bram both have serious trust issues, so it takes a long while for their relationship to become a relationship. They have chemistry from the beginning, but Susanna isn’t even sure what’s going on at first. She might have been a bit too naive for twenty-five.

The insight into medical treatment of women in that era was chilling, and the way it shaped Susanna’s character made the reader understand her reluctance to become emotionally involved. 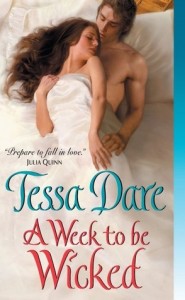 I’m curious to see how the couple in the next book, A Week to be Wicked, manage to get on. The set up was there, but it wasn’t what you might think. They aren’t even “in like” at this point. Far from it.

However, one does leave the story with an urge to slap Susanna’s father upside the head. Repeatedly.

3 thoughts on “Review: A Night to Surrender by Tessa Dare”