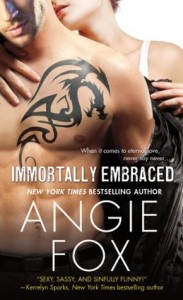 Even during a truce, Dr. Petra Robichaud has her hands full as the M*A*S*H surgeon to an army of warring gods—especially when Medusa herself turns up pregnant. Petra has no idea what to expect when a gorgon’s expecting, but she won’t let it turn her to stone. As the healer-hero of an ancient prophesy, it’s Petra’s job to keep the peace. But as the lover to a warrior demi-god, she knows how impossible some jobs can be…

Commander Galen is sexy, strong, and sworn to lead his team to hell and back. But when he announces to Petra that he can no longer risk her life for his love, the doctor is on her own…Until a mysterious new entity—in the form of a hot-blooded male—enters the picture. Can he be trusted? Can he be resisted? Meanwhile, an oracle delivers another prophesy that places Petra back on the frontlines with the man she may be bound to for eternity—in love, or in war…

The over-the-top snarky humor is every bit as much in evidence in this second installment of Angie Fox’s Monster M*A*S*H series as it was in the first book, Immortally Yours (reviewed here). But Immortally Embraced is definitely the second book in a trilogy, and as such, is a whole lot darker than book one, in spite of starting during a truce in the centuries-long war between the new gods and the old gods.

Starting out with a pregnant Medusa was screamingly funny. Petra’s deadpan humor at the situation was terrific, particularly in the face of the Medusa’s petulant, but all-too-normal reaction to the news. 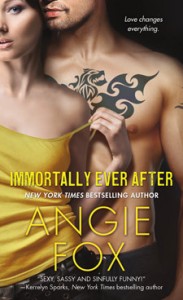 Back to our heroine. Petra should be having a great time. There’s a truce on. But the first thing that happens is that her lover, the guy that the ENTIRE FIRST BOOK spends getting her together with, breaks up with her. For no good reason. He gets assigned a secret mission, goes all noble on her, and breaks up with her so that she won’t wonder what happened to him. Bye-bye. (Probably not, there is a book 3 –Immortally Ever After – coming up.)

Just as she starts to wallow in depression (who wouldn’t, the guy was awesome), her first ex comes back from the dead with a secret mission of his own that just so happens to fit in with the brand new prophecy that the oracles have just spewed out.

When I say “comes back from the dead” I don’t mean he’s a zombie, either. I mean he let Petra think he was dead. For ten whole years! Her angst about getting involved with Galen in book one was all about her grief over this guy, Marc. Except he wasn’t dead. That’s right, he pulled the nobility card so she would move on. Except she nearly didn’t.

Now he’s back. And in spite of his denials, he hasn’t gotten over Petra, either. Of course not.

There is a secret mission, behind enemy lines. It has to be behind enemy lines because the idiot got captured and has been practicing the same kind of meatball surgery as Petra on the other side of the war these ten years.

But he needs Petra to do the other thing that she does, her hidden talent. Marc needs her to talk to a dead guy. Their old teacher is a ghost with a really big secret. One that could either extend the peace, or make the previous centuries of war look like a Sunday afternoon picnic.

As long as Petra and Marc don’t get caught on the wrong side of each other’s lines while they figure it out.

Escape Rating B: I have a lot of mixed feelings about this book. I pretty much inhaled it in less than a day. But… 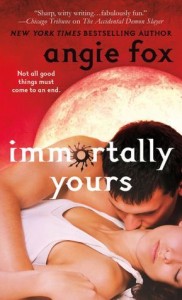 The first book set up, not just the relationship between Galen and Petra, but how devastated she was by Marc’s death and how long it took her to open herself up and let anyone in. In the end, Galen gave up his immortality for her. That was huge. Then he runs off on a secret mission and Marc shows up and she seems to have nearly forgotten about Galen. Even with their history, it seemed too sudden. Not the sex, but the emotions. If/when Galen returns, there’s going to be hell to pay.

The story seemed a bit “filler-ish”. It was fun, but it was dependent on a deus ex-machina ending. Not that there aren’t a lot of gods around to fill the role, but in this case it was particularly chaotic. (Bad pun, no cookie).

A lot of the fun in the first book centered on Petra and her MASH unit dealing with the stress of the surgery and pulling together as a team. Kind of the way the humor worked in the MASH TV series. That teamwork was missing in Immortally Embraced and I really wanted to see more of those guys.

I hope book 3, Immortally Ever After, picks the M*A*S*H and prophecy action back up!