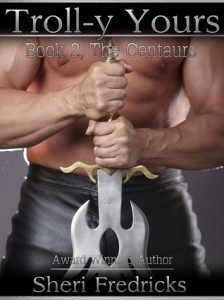 SHE TAKES A CHANCE.

Determined to forge a better life, Ella launches her new business with high hopes—until a sexy Centaur bumps into her and throws her life off course forever. Voted “Most Eligible Bachelor in Boronda”, Aleksander shakes up her world and tilts her in more ways than one.

Years of warfare and countless bedroom encounters have stolen Kempor Aleksander’s luster for life. He never expects to rediscover his zeal in the small, redheaded form of Ella the Troll, who fires his blood hotter than the deepest caverns in the forest.

A PASSION SO HOT.

But as trouble lingers in their midst—and edges ever closer—Alek and Ella spiral into troubled terrain. Turning to each other, the pair face down dangers that run impenetrably deep in their mythological world. But will the two lovers discover a passion that runs even deeper? 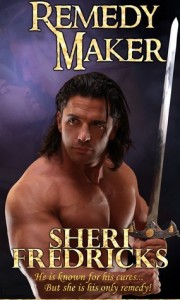 Troll-y Yours is the second book in Sheri Fredricks’ Centaurs series. The first book is Remedy Maker (reviewed here) In order to understand what is going on in Troll-y Yours it helps a lot to have read Remedy Maker. A whole lot.

The idea that that there are mythical creatures living in the Boronda Forest in Pennsylvania, mostly hidden from us humans, is kind of cool. Some of the humans that have found the mythics hunt them for big bucks, and I don’t mean antlers. The hunters tend to be asshats, mercenaries, sadists, or all of the above.

Not the point of this story, although the hint dropped at the end leads me to believe that the author might get there.

Like Remedy Maker, this is an interspecies romance. It’s also a romance between two people who are at different levels in the social/species pecking order and between a male who most people would think is gorgeous and a woman most people would think is less so. Of course, he thinks she’s beautiful. Ella really is a troll, but that’s her actual species. Only her abusive parents keep telling her that it also reflects her appearance.

Trolls are considered one of the lowest species in the Boronda social order. Centaurs are the highest species, and the queen is a centaur. So are many of the members of her guards, including Kempor Aleksander, the head of the guards.

Ella has picked up an idea from the humans. We do have a few good ones. She’s started a speed dating service, Troll-y Yours, for mythics with busy lives to find mates. She wants to earn enough money to move out of her parents’ house. Which is under a rock. They are trolls, after all!

At the first speed dating session, she mistakes Alek for one of her clients. He thinks she’s about the cutest thing he’s ever seen. Because she thinks he’s gorgeous, she mouths off. Then she’s attacked and he comes to the rescue, after her brother spectacularly fails to help her, which is one of the stories of her life.

While Alek and Ella find themselves drawing closer together, Alek still has a job to do. The rebels are still attacking the kingdom, and the queen he is sworn to protect. What it nearly takes him forever to realize is that protecting Ella has become the most important thing in his entire world.

Escape Rating C+: Troll-y Yours just wasn’t as much fun as Remedy Maker, in spite of Remedy Maker dealing with a number of more serious themes along with the romance. For this reader, the sub-plot of the rebel alliance against the kingdom just wasn’t explained enough to make whatever was going on make sense. It’s too important for the long story arc to be that confusing, especially since a major plot point with Ella’s brother hinges on it.

Too much is left unexplained on the personal side as well. Alek starts out the story as a total man-whore. He seems to regard having lots of sex as his duty to the females of his species. Ella has serious self-esteem issues as a result of a lifetime of parental verbal abuse. While it’s great that they find each other, I’m not totally sold on the relationship based on the story.

The mythic world that they live in begs to be explored a whole lot more.