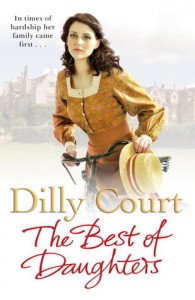 Despite her privileged upbringing, Daisy Lennox has always longed to make something of her life.

She is drawn to the suffragette movement, but when her father faces ruin they are forced to move to the country and Daisy’s first duty is to her family.

Here she becomes engaged to her childhood friend – a union both families have dreamed of.

But, on the eve of their wedding, war is declared, and Daisy knows her life will never be the same again.

The World War I era has suddenly become very popular, thanks to Downton Abbey, but Upstairs, Downstairs, definitely the precursor for Downton Abbey, was also set in that same period of social upheaval. Great change makes for great drama.

The Best of Daughters is about the daughter of a businessman. The Lennox family are not members of the nobility. Daisy starts out the story as upper middle-class. Wealthy but not a blue blood. And she wants more than the life planned out for her.

She starts the story in rebellion against the strictures laid out for her by society. Not just by being arrested at a suffragette demonstration, but by forming a friendship with a woman considered of a much lower class than herself.

The bond that Daisy forms with Ruby is one of the foundations of the book. As the title indicates, the story told from the point of view of the women in it, and the relationships between women form the backbone of the book.

That the war upset the social applecart and made many more things possible for her and all the women around her made the story much more interesting than any mere search for romantic fulfillment could have been.

Escape Rating B+: We go through this story from Daisy’s perspective, seeing the world as she grows and changes. It’s fortunate that she is not just likeable, but that the character is interesting, intelligent, and adaptable. Most important, she makes mistakes and learns from them.

Her character arc is one that contemporary readers can invest in; she starts as a very young woman who wants to make the world a better place, but has been a bit too sheltered to quite know how. She also desperately needs a purpose to her life. Then she suddenly has more than she bargained for and has to adapt quickly. She does, but finds the weight of managing everyone almost too much to bear.

And then the war. Following Daisy’s career as a nursing assistant was very reminiscent of Charles Todd’s Bess Crawford series (start with A Duty to the Dead), which covers the same period from the perspective of a trained nurse and is definitely worth a read.

Daisy comes back around to the place she started from. But she doesn’t, because she’s not the same. She grows up to realize that love was waiting for her all along, but that it has to meet her on her terms, and not the traditional terms that would have been set when she was a girl. The world has changed and she has changed with it. And anyone who loves her, including her family, has to accept those changes.

It makes for compelling family drama.

2 thoughts on “Review: The Best of Daughters by Dilly Court”