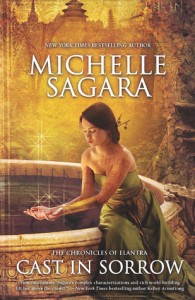 THE END OF HER JOURNEY IS ONLY THE BEGINNING…

The Barrani would be happy to see her die. So Kaylin Neya is a bit surprised by her safe arrival in the West March. Especially when enemies new and old surround her and those she would call friends are equally dangerous…

And then the real trouble starts. Kaylin’s assignment is to be a “harmoniste”—one who helps tell the truth behind a Barrani Recitation. But in a land where words are more effective than weapons, Kaylin’s duties are deadly. With the wrong phrase she could tear a people further asunder. And with the right ones…well, then she might be able to heal a blight on a race.

If only she understood the story….

Kaylin Neya is a Private in the Imperial Hawks of Elantra. She may be a lot of other things, and she may have had a lot of other identities thrust upon her, but at her core, that is the identity she has chosen for herself.

Which makes her very much a fish out of water in Cast in Sorrow, because the entire story takes place not just outside the city, but outside of any city. Kaylin has been maneuvered into being part of a Barrani ritual that might result in her death. Or it might heal a centuries-old rift in this immortal race. 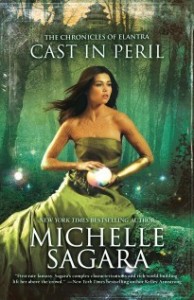 All Kaylin wants to do is survive, and bring all of her friends out with her. It is a much taller order than Kaylin begins the journey with, back at the start of Cast in Peril (reviewed here) because centuries ago, when her friend and fellow Hawk Teela was young, Teela participated in this same ritual and was used as Kaylin is being used. But Teela was damaged, and her return is also part of a game that is being played.

But if this is a game, who is the player, and who, exactly, is being played? And why? What part do the events of Teela’s past play in the damage to the Barrani race being done in the present? Why did Lord Nightshade arrange for Kaylin to become part of this ritual? Why has he toyed with her life?

And is that little dragon Kaylin carries on her shoulder the most powerful creature of all?

Escape Rating B+: Cast in Sorrow picks up almost moments after Cast in Peril ends; they are practically one story. I would not recommend attempting to start the series here. Actually, if you are interested in a combination of urban fantasy and high fantasy, start with either Cast in Moonlight or Cast in Shadow.

And thereby hangs a bit of a problem. The strength of the storytelling is in the city, and Cast In Sorrow is set totally in the West March. Kaylin is out of her element and so are we. Even stranger, the West March is literally unmapped, and I felt lost at times. I still wanted to find out what was happening, but Kaylin’s fish-out-of-water perspective left me completely “at sea” without the familiar background of the city to keep the story grounded.

However, the strength of the story was in filling in a ton of background about Teela, the Barrani, and even about Nightshade. Finding out the whole, or maybe most, of how and why Teela, out of all the Barrani High Court, came to the Hawks was fascinating. We see what made her who and what she is. The unique circumstances that would make an immortal “adopt” a mortal like Kaylin as first a “mascot”, and then a friend.

Nightshade’s maneuverings both become clearer and murkier at the same time, which is marvelous.

Then there’s the small dragon, Kaylin’s “familiar”. How she handled that was awesome.

Kaylin will be back next year in Cast in Flame. And she’ll be home where she belongs in Elantra…YAY!