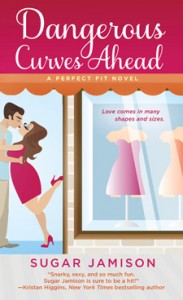 Ellis Garrett is dumping her critical boyfriend, opening a plus-size clothing store, and starting a blog—all to spread the word that fashion shouldn’t require a size-two body, and happiness should allow for the occasional cupcake. Or two. But is indulging fantasies about her sister’s long-ago ex, the still-hunky Michael Edwards, biting off more than she can chew?

Mike must be losing his detective’s touch. He doesn’t recognize Ellis when he bumps into her at Size Me Up, and he certainly doesn’t remember his ex-girlfriend’s outspoken sister being so irresistible. Her curves are indeed dangerous—and so is her wit. Could it be that Ellis is his Perfect Fit? One thing’s for sure: Mike will make it his sworn duty to find out…

I hate that message and I’m beyond ecstatic that the author didn’t go there. We’re not all size 2. We’re also not all 5’6”. Dangerous Curves Ahead is about a woman finding her bliss in the work sense and her HEA in the romantic sense by being true to herself.

After she’s kicked a dirty rotten demeaning arsehole to the curb.

Ellis Garrett’s clothing store has the best name in the universe, “Perfect Fit”, because that’s what she does. It’s not just that she sells plus-size clothes, it’s that she tailors the clothes to fit women who do not exactly fit into whatever size falls off the rack, big or small. (Women’s clothing sizing generally sucks.)

But starting a small business in today’s economy is a pretty iffy proposition, even on a good day. Ellis isn’t exactly making ends meet, sometimes they barely wave at each other. But she loves her store way more than she ever loved being a lawyer.

Suddenly, after the world’s longest dating dry spell, two men are vying for her attention; and neither of them look like good bets.

Well, they both look good, but neither of them probably is good. Her ex shows up and wants her back. Oh hells no.

And the hunk her sister dated in college is back in town. Ellis had a huge crush on Michael Edwards when they were all in school, and he’s hotter than he was back then. It’s too bad he doesn’t even remember her.

Especially since he wants to get to know this mystery woman a whole lot better. As intimately as possible.

Escape Rating B: Dangerous Curves Ahead is a fun romance starring an absolutely snarktastic heroine with a light dusting of suspense to liven things up.

The suspense involved someone breaking into Ellis’ store and, well, breaking things. It was pretty obvious who was behind the crime, but it does give Mike a chance to get overprotective and to play handyman.

Another major issue in the story were the opposing family dynamics. Mike’s family is pretty functional, but Mike has serious commitment issues. On that other hand, Ellis’ family is almost totally dysfunctional, but it mostly works, except for stuff between Ellis and her sister, Dina. That part is seriously messed up.

Mike and Ellis take a while to reach each other, and there is one big misunderstandammit, involving, of course, previously mentioned sister Dina, along the way.

The best thing about this story is that Ellis’ weight issues are only issues to her, not to Mike. He sees a beautiful, sexy woman who might need to get her baggage together about how she feels about herself, her family, her trust issues, and her arsehole ex.

I enjoyed the way they moved forward (after that misunderstandammit) in a direction that was slightly different from what either of them originally thought. They built a new future together. Lovely.

Reviewer’s note: I want a store like Ellis’ in my neighborhood, definitely including her marvelous crew.

One thought on “Review: Dangerous Curves Ahead by Sugar Jamison”