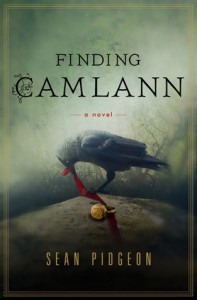 An ancient poem and a mysterious burial inspire an enthralling historical and literary quest.

Despite the wealth of scholarship that pretends to offer proof, archaeologist Donald Gladstone knows there is no solid evidence that a real King Arthur ever existed. Still, the great popular tales spun by medieval historian Geoffrey of Monmouth, and embroidered by Chrétien de Troyes, Sir Thomas Malory, and so many others, must have found their inspiration somewhere. A dramatic archaeological find at Stonehenge and the rediscovery of an old Welsh battle poem, buried among the manuscripts of the Bodleian Library, open up enticing—and misleading—new possibilities.

When the beguiling Julia Llewellyn, a linguist working on the Oxford English Dictionary, joins Donald on the trail of clues, their fervent enthusiasms, unusual gifts, and unfulfilled yearnings prove a combustible mix. Their impassioned search for truths buried deep in the past, amid the secret places and half-forgotten legends of the British countryside, must ultimately transform them—and all our understandings of the origins of Arthur.

The story begins as that of an archaeologist, Donald Gladstone, who is trying to debunk all of the romanticized legends of King Arthur in a book of popular scholarship. Unfortunately for our poor modern day hero, he isn’t able to say who or what Arthur was, only what he was not. It is not an auspicious start. Readers generally want something definitive, as his editor keeps reminding him.

Like the quest for the Holy Grail, Finding Camlann is a quest story. Donald Gladstone is searching, not for the true cup, but for the true story of the “once and future king”. His search leads him to the historic sources for the Arthurian legend, and he finds them sadly lacking. Hence his difficulty in determining what Arthur was.

But as he continues to delve into the material, he discovers that even misty legends must have a reason for someone to have needed the cloak of their legend for inspiration. Or there really was an ancient document behind the fabrication after all.

Gladstone’s quest is the pursuit of what lies beneath the layers of fiction. We see his research, how each painstaking clue leads to another fragile lead, one century back beyond another. He reveals how history gets made, and how it gets destroyed by mold and rot.

And how pursuing it to obsession can equally destroy a man’s life.

Escape Rating B+: For the reader, Finding Camlann has the feel of armchair research. In some ways, it reminded me a bit of Josephine Tey’s The Daughter of Time, with the notable exception that the researcher in this case was not “laid up”, but the reader does follow his search vicariously nonetheless.

Although the historical search is for King Arthur, the personages who are also found along the way are equally the historian Geoffrey of Monmouth and Owain Glyndŵr, the last native Welshman to hold the title Prince of Wales. The links between Arthur (also Welsh) and Owain were fascinatingly explored through the research. The way the stories blended, I couldn’t tell how much of the research was “real” and how much fictionalized for the purposes of the story.

And it didn’t matter, it carried me along, marvelously, just like the best of Arthurian legends.

There is a “framing story” here, the contemporary life of Gladstone and Julia Llewellyn, a lexicographer at the Oxford English Dictionary who begins by helping him find a lost poem that might be about Glyndŵr and might be about Arthur. Their friendship is the catalyst for changes in both their lives. The push and pull between them and the others in their orbit often move events.

But it’s the search that haunts the reader and keeps the story pushing forward. At the end, the forward step is into the possibility of glory. Or awakening. But certainly into change beyond imagining. And the author leaves the characters, and the reader stepping into the indescribable, and undescribed, unknown.