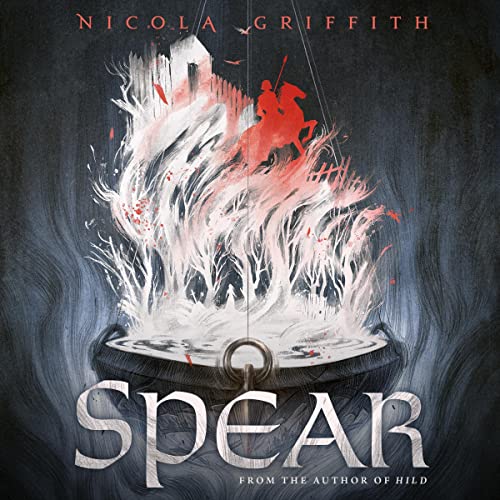 The girl knows she has a destiny before she even knows her name. She grows up in the wild, in a cave with her mother, but visions of a faraway lake come to her on the spring breeze, and when she hears a traveler speak of Artos, king of Caer Leon, she knows that her future lies at his court.
And so, brimming with magic and eager to test her strength, she breaks her covenant with her mother and, with a broken hunting spear and mended armour, rides on a bony gelding to Caer Leon. On her adventures she will meet great knights and steal the hearts of beautiful women. She will fight warriors and sorcerers. And she will find her love, and the lake, and her fate.

The stories of King Arthur and the knights of his Round Table are myths that we seem to absorb by osmosis, as the stories are told and retold – and have been for centuries. King Arthur is one of those legends that seems to reinvent itself for each new generation, and Spear, with its heroine Peredur, is a fine addition to that long and proud tradition.

As this story opens, Peredur doesn’t even know her own name. She is growing up in complete isolation, with only her mother for company, in a remote valley in Wales. Her mother has two names for the girl, one meaning gift which she uses on good days, while on bad days, she calls her “payment”. Whichever the girl might be, her mother tells her stories of the Tuath Dé, their great treasures and their terrible use of the humans they see as beneath them. Humans like her powerful but broken mother, who has isolated herself and her child out of fear that the Tuath, or at least one of them, will hunt her down in order to take back what she stole from him.

Peredur, like all children, grows up. She finds the valley small and her mother’s paranoia, however righteous, constricting. And she wants to fight. So she leaves the valley and her mother behind and goes out in search of the King and his companions – who she saved once when they wandered into her mother’s secluded valley and found themselves facing more bandits than they planned.

Peredur is searching for a place to belong and a cause to serve. But she has had dreams all of her life of a magical mystical lake and a woman who lives by its side. This is the story of her quest to learn who she really is, what is the true nature of her power, and to find a place where she can belong and can bring her skills to fight on the side of right. To make something, not just of herself but of the place to which she joins herself.

In the court of Arturus at Caer Lyon, Peredur finds a place she wants to call her own. And a king who is reluctant to let her claim it.

Escape Rating A: This is lovely. The language is beautiful, and the reading of it by the author gave it just the right air of mystery and myth. It felt like a tale of another world, as all the best variations on the Arthurian legends do in one way or another.

From one perspective, Spear stands on the shoulders of many giants, previous retellings of the “Matter of Britain”, from Monmouth to Mallory to T.H. White to Mary Stewart. In particular, it reminded me very much of Mary Stewart’s Merlin Trilogy (beginning with The Crystal Cave), not for its focus on Merlin but for its attempt to set the story in a more likely historical period, in both cases sometime in the 5th Century AD, after the Romans abandoned Britain and left a vacuum of power which Arthur did his best to fill.

By setting the story in 5th Century Wales, the author is also able to loop in the stories of the Tuath Dé, or Tuatha Dé Danann, and weave one set of legends with the other, to give Peredur both her origin and the source of her power. That she was then able to link the whole thing back to Arthur through his mad quest for the Holy Grail made for a delightful twist in the story – albeit one with an ultimately sad ending. (If the Tuath Dé sound familiar, it may be from The Iron Druid Chronicles where they play an important part even to the present.)

But Spear is an interpretation for the 21st century, in that Peredur, better known as Percival in many versions of the Arthurian Tales, is a woman who has wants to fight like a man and has chosen to present herself as a man because she lives in an era when women do not become knights, much like Alanna in Tamora Pierce’s Song of the Lioness Quartet.

This is also a queer interpretation of the Arthur tales, not just because Peredur is lesbian, but because she moves through a world where same-sex relationships and poly-relationships are simply part of the way things are. That includes Peredur’s love of the sorceress Nimüe, but also changes the eternal triangle of Arthur, Guinevere and Lancelot into a quietly acknowledged triad as a normal part of the way things are. Just as quietly acknowledged that the Lance of this Arthurian legend was born with one leg malformed. He’s still a capable fighter, and a veritable centaur on horseback. The world and its heroes are not now, nor have they ever been, made up entirely of straight, 100% able-bodied, white men, and this story acknowledges that heroes are everywhere, everywhen and everyone. As they, and we, have always been. 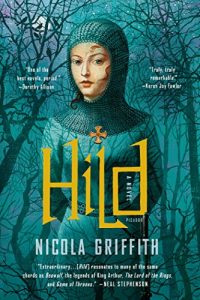 Spear turned out to be a lovely, lyrical, magical extension of the Arthurian legends that borrows rightfully and righteously, as all Arthurian tales do, from what has come before, from what fantasy writers have added to the period and the interpretation, from the time in which it is set, the time in which it is written, and the author’s magical stirring of that pot into a heady brew.

One of these days I need to pick up the author’s Hild, because it sounds like it will be just as fantastic (in both senses of that word) as Spear turned out to be.

One thought on “Review: Spear by Nicola Griffith”