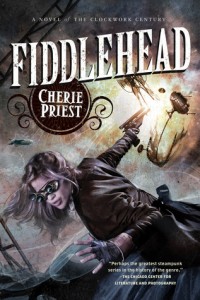 Young ex-slave Gideon Bardsley is a brilliant inventor, but the job is less glamorous than one might think, especially since the assassination attempts started. Worse yet, they’re trying to destroy his greatest achievement: a calculating engine called Fiddlehead, which provides undeniable proof of something awful enough to destroy the world. Both man and machine are at risk from forces conspiring to keep the Civil War going and the money flowing.

Bardsley has no choice but to ask his patron, former president Abraham Lincoln, for help. Lincoln retired from leading the country after an attempt on his life, but is quite interested in Bardsley’s immense data-processing capacities, confident that if people have the facts, they’ll see reason and urge the government to end the war. Lincoln must keep Bardsley safe until he can finish his research, so he calls on his old private security staff to protect Gideon and his data.

Maria “Belle” Boyd was a retired Confederate spy, until she got a life-changing job offer from the Pinkerton Detective Agency. Pinkerton respects her work, despite reservations about her lingering Southern loyalties. But it’s precisely those loyalties that let her go into Confederate territory to figure out who might be targeting Bardsley. Maria is a good detective, but with spies from both camps gunning for her, can even the notorious Belle Boyd hold the greedy warhawks at bay?

The end of the world as we know it makes for an exciting wrap up to an epic steampunk series. That’s the short version. The long version will absolutely “fiddle with your head”.

In Cherie Priest’s alternate steampunk universe of the Clockwork Century, an inventor created the Boneshaker engine that destroyed Seattle (I get a slight shiver writing that) instead of giving Russian prospectors a shortcut to gold in the Klondike.

Destroying Seattle unleashed a poisonous gas that turned everyone who inhaled it into zombies. Not only does that make things even scarier, but in the Clockwork Century timeline, knocking Seattle out of the Union, or effectively out of everything, extended the American Civil War by a couple of decades–and the zombie plague kept spreading.

By the time the series reaches Fiddlehead (book 6!) while the war has finally reached the same point it did in real time, that the CSA is simply running out of resources and the Union will win because it can outwait the Confederacy, there is effectively a third force in the war…the zombies.

That’s where Fiddlehead begins. Also what it is. Fiddlehead is a computer. Technically, it’s more like a Babbage engine. But that’s a matter of semantics. It’s an invention of Dr. Gideon Bardsley, and it has predicted that if the Union and the Confederacy don’t set aside their differences to fight the shuffling horde of hungry undead, then the entire human race is doomed. Just as the Fiddlehead spits out its dire prediction, a gang of mercenaries breaks into the building that houses it to murder Bardsley and destroy the device.

And the race is on. It’s a race between those who want to keep profiteering from the furtherance of the war, and just don’t give a damn how much it costs in human lives because they believe that all human lives are expendable, and those who believe that each life has value and dignity.

It’s glorious to see Abe Lincoln fight one last good fight, even half-broken by barely surviving the bullet meant to kill him in Ford’s Theatre. Ulysses S. Grant rises to one more military charge, from a lifetime of political compromises and drunken defeats, and he stands as the gallant general one final time.

But the story rises (and does it ever rise) on the strength of Gideon Bardsley and Moira Boyd along with those who aid them on their separate journeys. Bardsley, former slave and current genius engineer and inventor, is the man who creates the Fiddlehead and discovers the true nature of its threat. His discovery pushes the story forward, and his clarion call to stem the evil forces the actions of both good and evil. Moira “Belle” Boyd takes action out into the country at war, hunting down those on both sides who can not only corroborate Bardsley’s story, but those who must make a last desperate stand against inconceivable atrocity.

Escape Rating A: Fiddlehead, and the entire Clockwork Century series, is epic in scope and execution. If you like your fantasy/alternate history drawn over a very wide canvas, you will love this series. 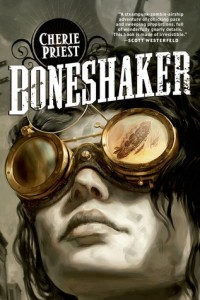 I’m sorry now that I haven’t read all the middle books in this series. I’ve read Boneshaker and Dreadnought (reviewed here) and highly recommend them both, but I haven’t YET read Clementine, Ganymede and The Inexplicables. Although enough backstory is explained to make Fiddlehead flow, I think I would have enjoyed the depths more if I had read everything. I’ll go back. The details seem absolutely awesome.

As it is, this story is incredibly layered. It’s not so much based on character as it is focused on action, and the action never, ever stops. Boyd and Bardsley have very little time to stop a very evil woman from hatching a dastardly plan. The survival of the human race is at stake.

I loved the way that Priest kept her alternate universe moving forward in time, yet still interwove the familiar elements of the history that we knew. U.S. Grant’s final parts of the story are particularly touching in this regard, they both match history, and don’t, and it’s just perfect and heartbreaking.