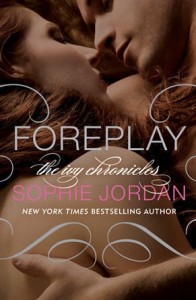 Pepper has been hopelessly in love with her best friend’s brother, Hunter, for like ever. He’s the key to everything she’s always craved: security, stability, family. But she needs Hunter to notice her as more than just a friend. Even though she’s kissed exactly one guy, she has just the plan to go from novice to rock star in the bedroom—take a few pointers from someone who knows what he’s doing.

Her college roommates have the perfect teacher in mind. But bartender Reece is nothing like the player Pepper expects. Yes, he’s beyond gorgeous, but he’s also dangerous, deep—with a troubled past. Soon what started as lessons in attraction are turning both their worlds around, and showing just what can happen when you go past foreplay and get to what’s real…

The “lessons in love” trope is a classic for good reason. Exploring the depths of passion, particularly for the first time, makes it all to easy for someone to be swept away by emotion. And teaching someone to find their passion makes for a very powerful bond. Or more simply, it is difficult to make love without feeling at least a little love.

In Sophie Jordan’s Foreplay, the two people learning that lesson are Pepper and Reece. Although this is a New Adult romance, the situation is a bit unusual because while Pepper is 19 and in college, Reece is 23 and managing his family’s bar.

Part of the “new adult” romance flavor is that the protagonists, while older than in young adult books, are at the point in their lives where they are making the kind of decisions that will affect their whole lives.

Also that they’re on their own and having sex. But we’ll get to that in a minute.

Reece is almost outside the trope. He’s been forced to take on the full set of adult responsibilities at a very young age. His mother died when he was young, his father was abusive and then became handicapped as the result of an auto accident, and Reece raised his younger brother. Now he manages the bar full-time. His ability to make mistakes and do things over is pretty limited. He’s already supporting his family.

The one thing he does that puts him in the frame for this story is agree to help Pepper learn how to snare the young man she thinks she’s always loved. Reece agrees to be the experienced man who will give her lessons in how to flirt and participate in romantic foreplay, because she’s totally clueless.

He already wants her for himself, and can’t figure out how any guy could have overlooked her for as many years as she says the guy she is pining for has. But he decides to take what he can get, even if actual sex isn’t part of the picture.

Part of what Pepper is eventually planning to give the guy of her dreams is her virginity.

About those dreams of Pepper’s. Well, she and Reece are a pair, because her childhood had even less security in it than his did, and that’s what this is all about. Her dream of marrying Hunter Montgomery isn’t about the guy so much as it is about the package deal. She wants to be part of a secure family, because she never had one of her own.

Her addict mother dropped her off at her grandmother senior apartment facility when she was 11 because mom couldn’t protect her from the low-life scum she used in order to buy her next fix any longer.

Hunter, his sister Lila and their parents lived next door. They seemed like the perfect family. Pepper fell for that and she’s been dreaming about it ever since. When Hunter breaks up with his girlfriend, Pepper sees her chance, but doesn’t know how to go about it. That’s where Reece comes in.

But the sweetness in their relationship is that as soon as Pepper and Reece start dancing around each other, it is a real relationship. Even though Pepper is upfront that it’s practice for someone else, and Reece says he accepts that, she can’t resist the pull of a man who really sees her and is there for her, just as she is.

She’s pretty but also shy and serious and bookish. She’s gotten a ton of student loans in order to go to college, and she works at least two jobs. She’s careful and worries about a lot of things, and she has nightmares about the past. She’s afraid of being abandoned because it happened. Reece sees the real Pepper.

And once Hunter sees that another guy is interested in Pepper, Hunter sees her too. Now Reece has to figure out what, and who, she really wants.

Escape Rating B+: I adore the “lessons in love” type story, and it was particularly well done in Foreplay. Pepper’s social awkwardness makes sense for her character, and I could understand why she felt the way she did about wanting to be smoother and more practiced with guys.

The love scenes between Pepper and Reece were more than hot. They also did a fantastic job of conveying how she got swept away by what she was feeling, and that it was the first time she felt those incredible sensations. It was all too easy for the reader to get swept right along with her!

Pepper’s roommates were terrific friends and wingwomen! I hope that we get their stories in later books in The Ivy Chronicles.