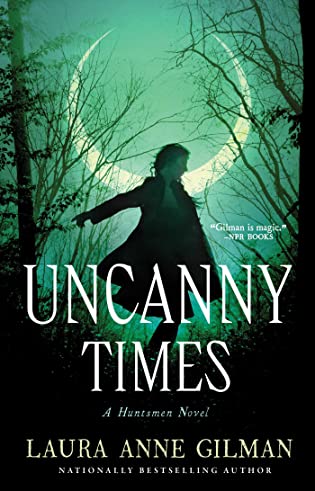 Huntsmen, according to the Church, were damned, their blood unclean, unholy. Yet for Rosemary and Aaron Harker the Church was less important than being ready to stand against the Uncanny as not being prepared could lead to being dead.
The year is 1913. America—and the world—trembles on the edge of a modern age. Political and social unrest shift the foundations; technology is beginning to make its mark.
But in the shadows, things from the past still move. Things inhuman, uncanny.
And the Uncanny are no friend to humanity.
But when Aaron and Rosemary Harker go to investigate the suspicious death of a distant relative, what they discover could turn their world upside down—and change the Huntsmen forever

Uncanny Times feels like it’s set in the ‘Weird West’, but it’s not. Still feels that way though. Rather, it’s set in a kind of alternate early-20th century New England, but the New England that grew out of Washington Irving’s creepy folklore-ish stories such as Rip Van Winkle and The Legend of Sleepy Hollow.

Rosemary and Aaron Harker might never have hunted a ‘headless horseman’ but whatever they’re after in tiny Brunson, New York, on the shores of Lake Ontario – in November! – is certainly equally uncanny. They just don’t know exactly what it is – at least not yet.

It’s their job to find out. The Harkers are Huntsmen, from a long line of people who have the ability to deal with the uncanny. They go where they are sent, figure out the nature of the threat they have to face – and eliminate it without involving local law enforcement or putting the local populace in danger – or at least in any more danger than they already are.

But this case is different from the beginning. They are summoned, not by one of their superiors in the Huntsmen but rather by an old family friend who always knew about the uncanny and those who are tasked with fighting it.

Or rather, by the man’s widow, who makes it clear that his death was as uncanny as the creatures that Rosemary and Aaron usually hunt. One of the man’s last requests was that if there was anything suspicious about his death that his wife ask the Harkers to come. There was and she has.

And the man was right – his death was at the hands of something uncanny. Something that doesn’t seem to be recorded in the rather extensive records of the Huntsmen. But whatever it is, or was, or wants to gorge itself into becoming, it’s up to Rosemary and Aaron to take it out – or go down trying.

Escape Rating B-: Uncanny Times is kind of a gothic version of historical and/or urban fantasy, with a bit of alternate history thrown in for bodies and spice. I call it gothic because the creeping horror is very slow burn, and it’s imbued in the atmosphere of the town long before we see it manifest as any sort of creature that the story can sink its teeth into – or that can sink its teeth into the characters.

This also doesn’t read like the version of 1913 that history records. Instead, it reads like the Weird West, an alternate version of the late 19th century – or what followed in this case – where the things that go bump in the night are real and history has gone down a different – and much creepier – leg of the trousers of time.

So this may be pre-World War I by our calendar, and Woodrow Wilson is President – but he’s no pacifist in this version of history. So it’s 1913 by way of something like Cherie Priest’s Boneshaker – we just haven’t seen what the equivalent of the massive earthquake was. At least not yet. The world of the Huntsmen reads more like that of Charlaine Harris’ Gunnie Rose, or Lindsay Schopfer’s Keltin Moore than it does the pre-WW1 world we’re familiar with. While the Huntmen organization and what it fights reads as very similar to the Circuit Riders of The Silver Bullets of Annie Oakley’s alternate world.

The story in Uncanny Times is a slow build of creeping horror mixed with more than a bit of confused investigation. It takes quite a while to get itself going, but that feels like its a necessary part of the entire story. Not only is this the first book in a projected series, but the creature that the Harkers are hunting for isn’t something that is supposed to exist even in their version of the world.

Added to that, they have to operate in plain sight while concealing pretty much everything they really are and really do. Most people don’t believe, and the ones that do mostly can’t be trusted. They even have to hide the true nature of their dog, because he isn’t just a dog. Botheration (best name ever!), besides being a VERY good boy, is also a hellhound and an expert tracker of both ordinary humans AND the creatures that the Huntsmen hunt.

And he steals pretty much every scene he’s in. Botheration is an awesome dog. (Don’t worry about Botheration, he’s bigger and stronger than most things that he hunts – and he comes out of this story every bit as fine as he went into it. I promise!)

I recognize that I’m a bit all over the map about Uncanny Times. I picked this up because I loved the author’s Retrievers series, which still has a place in my heart and on my physical bookshelf even 20 years later. But I have to confess that the lightning hasn’t struck again in that I’ve tried some of her later series but haven’t gotten hooked.

And I have to say that I liked Uncanny Times but didn’t love it as much as I hoped. It takes a long time to get itself going, and its two points of view characters are very private people. We don’t get to see nearly enough of what makes either of them tick. A lot of their investigation is obscured by fogs of various kinds and it makes the story murky as well.

But I loved Botheration. And the setting is fascinating because it feels like alternate history but the reviews don’t make it sound like it actually is – which really makes me wonder if I read the same thing everyone else did. So I’m torn, but whole in my conviction that I’ll pick up the next book in the series, whenever it comes out, at least to see what Botheration is bothering next!