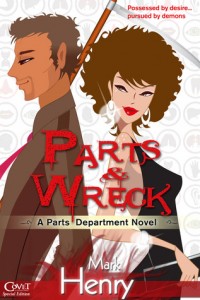 Wade Crowson, a brutish and brooding playboy and veteran vivisectionist for the Parts Department, runs into more than he bargained for in new partner, Lucid Montgomery, a quirky beauty with a bizarre secret and a string of psychiatric diagnoses she tries hard to keep hidden. Loving Luce will stamp a demonic target on her back and thrust Wade into a frenzied whirlwind of hilarious misunderstandings and, quite possibly, a stripping gig for emptynesters. Can they withstand the savagery of an exorcism (with or without the split pea soup) and come out alive and …in love?

If you still talk to your imaginary friend when you’re an adult, are you deranged? What if he isn’t really imaginary? How do you tell? Next question; which is more deranged, a demonic possession or a strip-tease involving bodily fluids, even if those fluids are fake?

Believe it or not, those questions manage to connect in a snarktastic and occasionally scary start to Mark Henry’s Parts Department series in Parts & Wreck.

About those parts…if a victim of demonic possession dies and donates their organs, the possessed organs, well, are not exactly the gift of life that they’re supposed to be. The recipient lives, true enough. But they live possessed by a demon, just like the donor.

Parts the transplant recipients needed fairly badly, after all. That’s why they had those transplants in the first place. But demon removal and exorcism trumps any individual life. The Parts Department operators always call an ambulance before they leave.

It’s a nasty and brutal job, but somebody has to do it to keep the demons in their place.

Wade Crowson is one of those people who do that horrible job. He’s very good at it. The only problem is that he keeps losing his partners to demonic possession. Then they die. What’s worse is that the demon Astaroth seems to be targeting Wade intentionally. That damn demon wants Wade to suffer. The feeling is mutual, but the demon is having way more luck at the problem.

Part of Wade’s suffering is that he keeps attracting, and being attracted to, female partners. And then losing them. His new partner is Lucid Montgomery, and Wade starts out not being sure whether Luce is a candidate for his next partner at the Parts Department, or the next candidate for an exorcism. Her file shows that she’s either slightly loony or slightly possessed, but it’s difficult to tell which.

All Wade is sure of is that she’s totally captivating. And that she doesn’t seem to have a filter on what comes out of her mouth, a fact which makes him smile for the first time in years.

It also makes Luce tremendously fun to follow. right up to the point where she finds out that her imaginary childhood friend was a very real demon. And that he’s still around.

Escape Rating B+: This is the first time I’ve ever read a book where the romance is furthered over a vivisection. Really. And this isn’t a horror story even though the idea of demons colonizing via donor organs is well, kind of, horrifying.

Instead, the crew at the Parts Department thrives on gallows humor. Anyone who worked there and couldn’t snark like there was no tomorrow (because they know there might not be) would probably die of terminal depression long before the demons did them in.

After all, the background set up for this story is damn dark under all the snark. There are demons out there and they are out to get us. Wade’s first demon exposure wasn’t just life-altering, it also robs him of his childhood.

Same is true for Luce, even though she doesn’t realize it. When they find each other, it’s a chance for a bit of light amidst the darkness, if they dare to grab it.

The emphasis in this story is on the build-up. I could see the underpinnings being put in place for a fantastic series about the grim world that makes the Parts Department necessary. I’m up for reading more. There’s also a kind of kinky-sweet love story between Wade and Luce, but I enjoyed Parts & Wreck mostly for setting up the underbelly of how this world works.

It felt like the demons have had it out for Wade for a long time, so I think Wade and Luce will be back. That’s bad for them, but good for the rest of us.

The most frightening concepts in this story are at the strip club, because those don’t seem to be totally demon inspired, but they are awesomely evil. 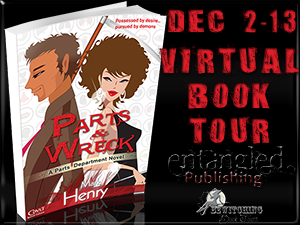