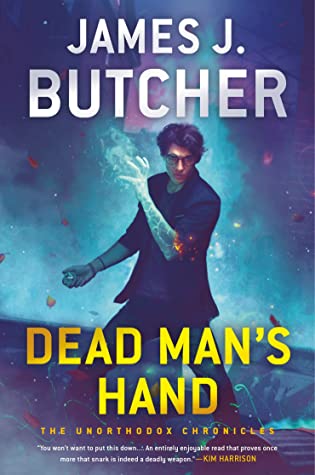 In the tradition of his renowned father, James J. Butcher's debut novel is a brilliant urban fantasy about a young man who must throw out the magical rule book to solve the murder of his former mentor.
On the streets of Boston, the world is divided into the ordinary Usuals, and the paranormal Unorthodox. And in the Department of Unorthodox Affairs, the Auditors are the magical elite, government-sanctioned witches with spells at their command and all the power and prestige that comes with it. Grimshaw Griswald Grimsby is...not one of those witches.
After flunking out of the Auditor training program and being dismissed as "not Department material," Grimsby tried to resign himself to life as a mediocre witch. But he can't help hoping he'll somehow, someway, get another chance to prove his skill. That opportunity comes with a price when his former mentor, aka the most dangerous witch alive, is murdered down the street from where he works, and Grimsby is the Auditors' number one suspect.
Proving his innocence will require more than a little legwork, and after forming a strange alliance with the retired legend known as the Huntsman and a mysterious being from Elsewhere, Grimsby is abruptly thrown into a life of adventure, whether he wants it or not. Now all he has to do is find the real killer, avoid the Auditors on his trail, and most importantly, stay alive.

Leslie Mayflower’s partner is dead. Well, his ex-partner, as Mayflower has retired from the Department of Unorthodox Affairs. But Mayflower, better known – and righteously feared – in that community as the Huntsman feels like he owes his former partner one last debt, so he lets himself be convinced to view the scene of her murder.

What he finds is a puzzle he can’t resist. His partner, Samantha Mansgraf, one of the baddest baddasses to ever work for the Department, left a message in her own blood to “Kill Grimsby” after obliterating everyone and everything at the scene except her own mangled corpse.

Mayflower is having a difficult enough time believing that anyone could have taken Mansgraf out, but he’s absolutely positive it couldn’t have been Grimsby. Because Grimsby is an utter failure at pretty much everything – including being a witch and applying to work for the Department – while Mansgraf was, well, Mansgraf. A name which literally translates to ‘man’s grave’ because she was just that powerful, paranoid, and deadly.

Mayflower wants to avenge his former partner. He knows he can’t trust the Department, that’s part of why he retired in the first place. He’s not sure that Grimsby is either trustworthy or even remotely capable of assisting him. After all, the man is currently working as a clown for children’s birthday parties at the worst and most inedible food franchise in the city if not the entire planet. And he’s failing at that.

But both men are broken and both need someone to help them stand up – or at least someone to stand up for. They may not be much, separately or even together – but they’re all they’ve got.

Which gives them each the one thing they need more than anything else. The chance to finally be enough.

Escape Rating B: Once upon a time, at the turn of the most recent century, there was a wizard listed in the Chicago phone book. The temptation to compare Boston’s Grimshaw Griswald Grimsby to Harry Dresden is not surprisingly a strong one, considering that Dresden’s creator and Grimsby’s are father and son, both playing in the same urban fantasy storybox.

But the 21st century world of Dead Man’s Hand isn’t Chicago in 2000, although it does take some of its inspiration from a different bit of intellectual property of the same era.

In 1997, a little movie called Men in Black began a franchise that is still stuttering along. (The reviews of the most recent entry in the series were not exactly stellar.) MiB is set in a near-future world where aliens walk among us in disguise. Naturally, there are agents that monitor those aliens, ensuring that the secret of Earth’s place in the wider galaxy is kept, at the cost of losing memories and/or exile or outright termination or all of the above. Those agents are the titular men in black, and the agency that employs them is huge, powerful and entirely too subject to that old saw about power corrupting and absolute power corrupting absolutely.

In urban fantasy, which Dead Man’s Hand most definitely is, the strange, weird, wonderful and sometimes deadly and dangerous things that walk among us aren’t from ‘out there’ so much as ‘over there’ or, all too frequently, ‘below’. Or, again, all of the above. In this world, those humans who can see and work in ‘Elsewhere’ are witches (whether male or female). There are, however, plenty of other beings from ‘Elsewhere’ that are capable of messing with humans, whether ‘Usual’ (garden-variety humanity) or ‘Unorthodox’, meaning witches and a few others.

And there’s an agency set up to monitor and control anyone or anything who can see ‘Elsewhere’, whether human or not. Just like the aforementioned Men in Black, that agency is huge, powerful and entirely too subject to that very same old saw about power and corruption.

That the offbeat pairing of experienced, emotionally stunted and permanently grizzled Mayflower with wide-eyed newbie Grimsby has more than a passing resemblance to the pair of agents in the first MiB movie feels like more than coincidence. Although I keep seeing Sam Elliott as Mayflower and let’s just say that STILL not a bad look. At all.

The story in Dead Man’s Hand begins with Mayflower’s search for revenge but quickly morphs into a search for a magical McGuffin that he hopes will lead to that revenge. But, as is true in most of urban fantasy, magical McGuffins are never exactly who, what or where everyone thinks they are, and that’s especially true here.

What makes that work is the way that Mayflower and Grimsby discover that they are each not quite what the other thought, either.

There’s a lot of running and chasing in pursuit of that McGuffin – or in retreat from the other forces in search of that same item. One of the locations that chase led through left a bad taste in at least this reader’s mouth. It’s possible that the bit chasing down body parts in the sex dungeon run by demons was intended to be funny, but if so the joke didn’t land. And probably shouldn’t have.

On my other hand – and I have plenty to choose from in this one as there’s one extra – the dig down through the layers of misdirection and the nearly archaeological level digging required to find either Mayflower’s or Grimsby’s remaining faith in themselves took us into some emotional dark places and gave readers plenty of dirty deeds to look forward to uncovering in future entries in the series. 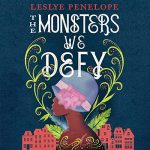