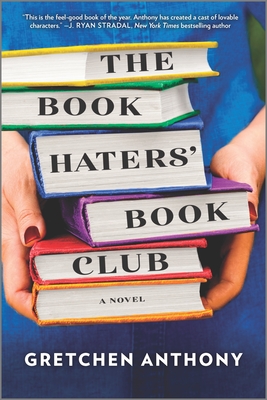 All it takes is the right book to turn a Book Hater into a Book Lover…
That was Elliott’s belief and the reason why he started The Book Haters’ Book Club—a newsletter of reading recommendations for the self-proclaimed “nonreader.” As the beloved co-owner of Over the Rainbow Bookstore, Elliott’s passion and gift was recommending books to customers. Now, after his sudden death, his grief-ridden business partner, Irma, has agreed to sell Over the Rainbow to a developer who will turn the cozy bookstore into high-rise condos.
But others won’t give up the bookstore without a fight. When Irma breaks the news to her daughters, Bree and Laney, and Elliott’s romantic partner, Thom, they are aghast. Over the Rainbow has been Bree and Laney’s sanctuary since childhood, and Thom would do anything to preserve Elliott’s legacy. Together, Thom, Bree and Laney conspire to save the bookstore, even if it takes some snooping, gossip and minor sabotage.
Filled with humor, family hijinks and actual reading recommendations, The Book Haters' Book Club is the ideal feel-good read. It’s a celebration of found family and a love letter to the everyday heroes who run bookstores.

Elliot Gregory is watching from somewhere over the rainbow – or somewhere in the ‘Great Beyond’ – as his business partner, her daughters and his domestic partner all flail together and separately in the aftermath of his sudden death.

Yes, this is one of those stories that starts, to paraphrase Dickens’ A Christmas Carol, Elliot was dead, to begin with.

He left behind a mess. He also was a mess. And he’s left behind a whole bunch of people who all loved him in one way or another to clean it up. But first they have to find the depths of that mess.

And then they have to find the true depths within themselves and each other.

Things don’t begin auspiciously. Irma Bedford meets her daughters, Laney and Bree, along with the late Elliot’s domestic partner Thom, at the offices of a real estate development firm to inform them that she has already sold the bookstore and the land it sits on to said investment firm for a sum that does not remotely look like the true value of the business and its real estate.

And that it’s a done deal that closes in less than a month.

What Irma doesn’t tell them is why – no matter how many sneaky and not so sneaky ways they ask. As far as Irma is concerned, it’s her business and not theirs. And an argument could be made for that. (Elliot and Thom were not married, Elliot didn’t leave a will, so as the surviving business partner the bookstore is legally Irma’s to continue to operate or dispose of as she pleases. Or as she feels compelled to. Or whatever the hell is motivating her at this point.)

But it makes no sense. It’s clear from the outset that the development firm is shady AF and that they seriously lowballed the offer. Even if Irma does want to sell she’s being taken advantage of while she’s at a low place. And even if she does want to retire – and she might – she’s been grooming her younger daughter to take over the bookstore for Bree’s entire life. The change in direction is abrupt to say the least.

And the more Laney, Bree and Thom dig, the fishier the whole thing seems. So they fight back with everything they have, banding together and stepping way out of their collective comfort zones to get the developers to back off of the deal before it’s too late.

But just when they think they’ve won, they discover that they had lost the war long before they began the first battle. Now they’ll have to fight on an entirely different front – before it really is too late after all. Again.

Escape Rating B-: I expected to fall in love with The Book Haters’ Club, but I left – or rather I middled – with a whole lot of mixed feelings.

I say middled because the first half of the book is all about Laney’s, Bree’s and Thom’s all-out, no-holds barred campaign to save the bookstore – no matter what Irma thinks. While what Irma thinks, feels and for that matter what in the hell she’s doing this for is all a deep, dark secret that makes absolutely no sense at all.

At the midpoint, the story turns itself around, because it’s only then that the first layer of the secret is revealed. But it kind of feels like that slog to save the store was all a waste. It is a waste for Laney, Bree and Thom, but it’s at that point where the first half of the story feels like it was pointless for the reader as well.

But once that first, brittle, outer skin of that onion of secrets gets cracked and peels away, the story finally starts getting somewhere. Because, while Elliot may have left them all with his big, untidy mess of secrets, they all have plenty that they need to reveal, not just to each other, but to themselves.

So the first half of the story was a whole lot of frenetic action that led nowhere, The second half is a whole lot of introspection and grief and the work of opening up and letting friends in to help with your mess.

While turning a group of people who were once a roiling mass of resentment at each other – and honestly for good reason – into a surprisingly cohesive found family.

The biggest part of the charm of this story is in the characters, once we’re finally able to start getting to know them – and they’re back to getting to know each other. One of the odder things about this story is the way that dear, dead Elliot breaks the fourth wall from on high (presumably) to inject himself into both the storytelling and the proceedings in a way that just didn’t work for me. Your reading mileage, of course, may vary.

So there’s plenty to love in this story about secrets, partnerships, quirky neighborhoods and found families. And if you love books about books and reading filled with terrific book recommendations, there are plenty of those here to savor. I just wish the whole thing had gotten to its point a whole lot sooner.