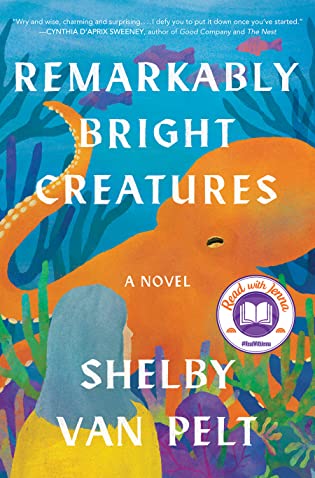 A novel tracing a widow's unlikely connection with a giant Pacific octopus.
After Tova Sullivan's husband died, she began working the night shift at the Sowell Bay Aquarium, mopping floors and tidying up. Keeping busy has always helped her cope, which she's been doing since her eighteen-year-old son, Erik, mysteriously vanished on a boat in Puget Sound over thirty years ago.
Tova becomes acquainted with curmudgeonly Marcellus, a giant Pacific octopus living at the aquarium. Marcellus knows more than anyone can imagine but wouldn't dream of lifting one of his eight arms for his human captors--until he forms a remarkable friendship with Tova.
Ever the detective, Marcellus deduces what happened the night Tova's son disappeared. And now Marcellus must use every trick his old invertebrate body can muster to unearth the truth for her before it's too late.

Remarkably Bright Creatures is a story about higher numbered chances than merely second and the long tentacle of coincidence that helps them happen.

Initially, they don’t seem to have much in common. A man whose prime isn’t very prime, who seems to have thrown away all his chances. An aging woman who has lost both her husband and her son, living lonely but determinedly in the house her parents built. And a giant Pacific octopus eking out his final days in the tiny Sowell Bay Aquarium on Puget Sound.

But Marcellus the octopus, whose placard outside his tank lists him as a “remarkably bright creature”, is as clever as he is bright. He’s also an intelligent observer of human behavior and a bit of an escape artist. There isn’t much else to do, all alone in his tank.

So he occasionally squeezes himself out to graze on the sea cucumbers – or even hazard a trip to the staff break room when the smell of leftover Chinese takeaway is too tempting to resist.

Which is how Tova Sullivan finds him, outside of his tank, caught in a tangle of wires and electrical cords and about to suffer what Marcellus calls “The Consequences” of being out of a tank for more than 20 minutes. Which he can calculate.

Marcellus is, after all, a remarkably bright creature.

Tova rescues him from the tangle. Not only that, but she doesn’t report Marcellus nighttime excursions to the aquarium’s director. It’s their little secret and the beginning of their unlikely friendship.

A friendship that ultimately results in both of them achieving the dreams they never admitted that they held. Not even to themselves.

Escape Rating A-: This book turned out to be WAY more charming than I expected. It was recommended by someone in my reading group so I was expecting a decent to good read, but this turned out to be just lovely.

This is kind of a quiet story, where things happen slowly and truths emerge over time. To the point where it borders on literary fiction a bit. But instead of being dark and gloomy where nothing happens and everyone argues a lot – which is how I tend to see litfic – the situations all start out a bit gloomy but everyone gets better. Even Marcellus.

At first you kind of wonder how Cameron’s story is going to link up to Tova’s and Marcellus’. And that coming together takes a while and goes off on a couple of tangents as it meanders along. But once it does, it all fits together beautifully.

What holds the story together – besides Marcellus’ tentacles – is Tova. Her son disappeared without a trace when he was just 18. Her husband has passed away. She’s alone – and yet she’s not. She has friends, she has a job, she makes sure she has purpose. And yet she also has concerns about what will happen to her when she can’t live on her own anymore.

Being Tova, she doesn’t wallow. Instead, she takes steps to determine her own future for her own self. In her situation I’d want to be her when I grew up. She’s a character to both admire and empathize with. To the point where we want her to get a better ending than it looks like she’s headed for when the story begins.

Cameron is not initially all that likable. He’s not bad, and he’s taken some seriously rough knocks, but he’s not good at taking responsibility for himself. And at 30 it’s past time he did. He arrives in Sowell Bay searching for his sperm donor in the hopes of a big financial score. He’s doomed to be disappointed – and it’s the making of him.

Marcellus – who is much more present as a character than one might think – is an absolute gem. At the same time, his intellectual presence in the story, his perspective on the events that he helps to bring about, is both fascinating and a bit equivocal. Anyone who wants to believe that all of the thoughts and actions ascribed to Marcellus are in the minds of Tova and Cameron – in the same way that we all believe we know what our pets are thinking when we most likely don’t – the story still works – and works well.

But it’s so much better if you let yourself believe that Marcellus is helping Tova and Cameron all along – and that they are helping him as well.

I enjoyed Remarkably Bright Creatures a whole lot more than I ever expected to. And in that way that when you are conscious of something you suddenly start seeing it everywhere – like getting a new car and being aware of all the cars of the same make and model sharing the road with you – I liked this so much that I started seeing books with octopi characters everywhere. In addition to Sy Montgomery’s The Soul of an Octopus from a few years ago there’s The Mountain in the Sea by Ray Nayler coming out in October, and Sea Change by Gina Chung next year.

I’m going to hunt me down some more octopi to read about while I look forward to seeing what this author comes up with next!