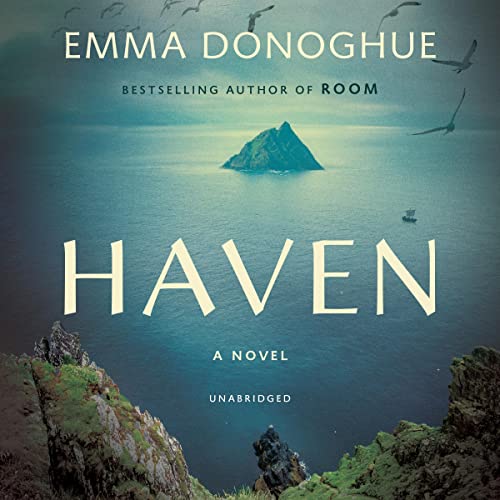 Three men vow to leave the world behind them. They set out in a small boat for an island their leader has seen in a dream, with only faith to guide them. What they find is the extraordinary island now known as Skellig Michael. Haven has Emma Donoghue’s trademark world-building and psychological intensity—but this story is like nothing she has ever written before.
In seventh-century Ireland, a scholar and priest called Artt has a dream telling him to leave the sinful world behind. Taking two monks—young Trian and old Cormac—he rows down the river Shannon in search of an isolated spot on which to found a monastery. Drifting out into the Atlantic, the three men find an impossibly steep, bare island inhabited by tens of thousands of birds, and claim it for God. In such a place, what will survival mean?

Some books make me think. Some books make me feel. This book made me want to push one of the characters off of a very high cliff. And there are plenty of precipitous crags and rocky outcroppings to choose from on the Great Skellig.

(In case the location of this story sounds a bit familiar, it probably is. The Great Skellig is now known as Skellig Michael, and was the place where Luke’s Jedi retreat was filmed in The Force Awakens, The Last Jedi and The Rise of Skywalker.)

There really was a monastic retreat on Skellig Michael, and it probably was founded at the time this story is set, the 7th century AD. But probably, hopefully, not like this. Because the monastery at Skellig Michael seems to have had continuous occupation – barring the occasional Viking raid – from its founding through at least the 11th century.

That record of continuous occupation requires a level of both practicality and sanity that is just not present in this story. Haven could be read as a how NOT to do it book.

The opening is not exactly a reasonable start for the 21st century, but would have been for the 7th. Brother Artt, a well-known monastic scholar, has a dream that he and two other monks found a monastery that will be isolated from the temptations of the world. Artt sees those temptations everywhere, including in the safe and well-endowed monasteries of Ireland where he travels.

Artt’s real dilemma, however, is the one that Shakespeare’s Julius Caesar so eloquently described a millennium later. That the fault is not in our stars – or in this case Artt’s stars or even his dreams – but in himself.

It’s not even that Artt is a rather extreme ascetic, not merely willing but seemingly desirous of giving up even the relatively spare comforts of an established monastery because they simply aren’t spare enough for his desire to punish himself to death. It’s that he takes two men with him into his remote, deprived and in some ways even depraved exile, and that because of the rules of the church they are sworn to obey him no matter how crazy he gets.

And he gets very crazy indeed. It’s Artt’s descent into madness and Cormac’s and Trian’s diligence and obedience – to the point of their own mental and emotional breaking – that forms the rocks and crags of this thoughtful, sometimes lyrical, but also exceedingly cold story.

Escape Rating C+: One of the things about reading is the way that it gives the reader the ability to step into another’s shoes and see the world as they might have seen it. This is a book that made me wonder just how far out of ourselves we are, or even should be, able to step.

It’s not just that Artt is an arsehole – although he certainly is in the way he treats Trian and Cormac – it’s that his arseholery comes from a place that is so foreign to me that he grates on me every bit as much as Cormac’s endless stories and Trian’s burbling chatter grate on him. (And I’m saying that even though Artt’s reaction to their constant need to make verbal noise would drive me just as far round the twist as it does him.) Howsomever, while I don’t share their religious faith – let alone the almost blind way in which they practice it – I can see both reason and fellowship in Cormac’s practicality, just as I can in Trian’s youthful curiosity. I can walk a bit in their shoes – or sandals as the case may be.

Artt I’d prefer to throw off one of the rocks. But because his outlook on life is so completely foreign to me, I spent an uncomfortable half of the story caught between wondering if that’s because his perspective is so alien – or if he’s just an arsehole and he’d be one in any time and place in which he found himself. But as the situation on Skellig Michael became increasingly dire, and Artt’s response to the direness of those circumstances and his complete, total and utter unwillingness to consider ANY of the practicalities of their inevitable plight I reached the conclusion that he was just an insecure and angry arsehole and that he’d be one no matter what the situation. His arseholery would just manifest differently in other times and places.

So this is not a comfortable story and not just because of the increasing discomfort of the monks’ situation. And that is well beyond uncomfortable. But Cormac and Trian are under the rule of an emotionally and psychologically abusive master and what we witness is their increasing desperation and self-blame as they attempt to reconcile what they’ve been taught to believe with the increasing insanity of what they feel compelled to do.

One of the few shining lights of this story was that I listened to the audiobook instead of reading the text. I probably would not have continued without the audio because this story felt so brutal. But the narrator Aiden Kelly was excellent. I have to particularly call out that he did a terrific job of making the three men’s voices sound so distinct that I could easily tell one from another even when dropping back into the audio after a day or two away from it. His reading elevated the book to that plus in the rating.

In the end, I’d have to say that I’d recommend this narrator unreservedly, and I’ll look for more audiobooks he’s been part of. The book, on the other hand, I’d be guarded about who I recommended it to. The writing, as I said, is lovely to the point of being lyrical, but this story is so very cold. The author is extremely popular, but for someone looking for an introduction to her work I’d definitely choose something else, either The Pull of the Stars or Room. 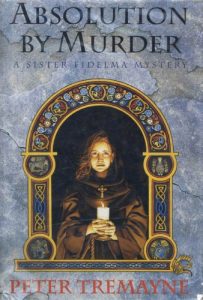 And if someone is interested in historical fiction about this time period in Ireland in general and the Catholic Church in Ireland at this period in particular, I’d recommend the Sister Fidelma series by Peter Tremayne, which begins with Absolution By Murder. These are historical mysteries, featuring a central character who is both part of the church and a practicing lawyer. She’s also, I have to say, someone who Artt would detest on sight, so recommending her instead of him seems like a bit of well-deserved payback.