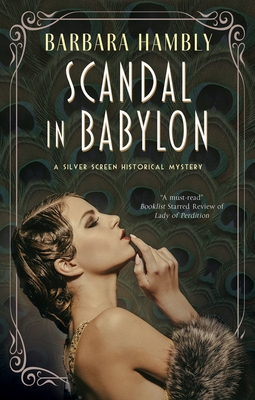 "You shall never have a penny of my money. Leave me alone or I will shoot you dead!"

1924. After six months in Hollywood, young British widow Emma Blackstone has come to love her new employer, glamourous movie-star Kitty Flint - even if her late husband's sister is one of the worst actresses she's ever seen. Looking after Kitty and her three adorable Pekinese dogs isn't work Emma dreamed of, but Kitty rescued her when she was all alone in the world. Now, the worst thing academically-minded Emma has to worry about is the shocking historical inaccuracies of the films Kitty stars in.
Until, that is, Rex Festraw - Kitty's first husband, to whom she may or may not still be married - turns up dead in her dressing room, a threatening letter seemingly from Kitty in his pocket.
Emma's certain her flighty but kind-hearted sister-in-law has been framed. But who by? And why? From spiteful rivals to jealous boyfriends, the suspects are numerous. But as Emma investigates, she begins to untangle a deadly plot - and there's something Kitty's not telling her . . .
This gripping first in a brand-new series from NYT-bestselling author Barbara Hambly brings the sights and sounds of Hollywood to life and is a perfect pick for fans of female-fronted historical mysteries set in the roaring twenties.

Welcome to Hollywood, circa 1924, in the heady days before the content crackdown of the Hays Code, and just a few short years before Al Jolson’s famous line in the original Jazz Singer, when the audience first heard an actor in a movie say, “You ain’t heard nothin’ yet.”

Movies may not talk yet, but everyone in the movie industry, from the gossip columnists to the extras, certainly has plenty to say. And as our story begins, they’re all saying it about silent screen temptress Kitty Flint – better known to her legions of fans as Camille de la Rose.

Kitty’s sister-in-law, the young widow Emma Blackstone, isn’t so much a fan as she is a personal assistant, general factotum and confidant to the woman who rescued her from desperation in the form of serving as a paid companion to an ill-tempered, irascible old woman who was driving Emma into an early grave. Literally.

After six months in Tinseltown with Kitty, Emma isn’t sure whether she’s happy or not, fulfilled or not content or not, but she’s sure that Kitty needs her and that taking care of Kitty and her three spoiled Pekingese, writing last-minute scene treatments for Kitty’s movies, has both exhausted her and given her a new lease on life.

At least until someone ends up dead in Kitty’s dressing room, with Kitty unwilling to reveal her alibi – probably because she was two-timing at least two of her powerful and well-heeled lovers with a handsome stagehand. Or so Emma believes, because that’s par for Kitty’s behavior even at the best of times – which this certainly is now.

The dead body belongs to Kitty’s long-absent husband. Or possibly her ex-husband. But whether or not a divorce ever occurred is not the biggest problem that Kitty has to deal with when it comes to her first husband’s death.

He died in her dressing room. He was shot with her gun. She has no alibi. When the police discover sloppily concealed threatening letters between Kitty and Rex, it’s a foregone conclusion that Kitty will be arrested for his murder.

The gossip columnists are going to have a field day. The fire-and-brimstone preaching protestors that surround the studio thank heaven for the ammunition in their fight to censor the movie industry. Kitty’s rivals start circling her like sharks who have spotten chum in the water.

But Emma isn’t so sure that the whole thing adds up nearly as well as the corrupt and incompetent police would like to believe it does. The setup for the crime is meticulously planned. The execution of the crime – and of Rex Festraw – is incredibly sloppy. It doesn’t make sense that Kitty did it, to the point where any competent lawyer is going to get her off – if this case ever comes to trial.

It’s a magician’s trick. Distract the audience with something big and flashy over here, so no one looks at what’s really going on behind the curtain – or under the hat – or being pulled from the magician’s sleeves.

It’s up to Emma to figure out just who the magician is behind this particular trick and why they are out for Kitty – before it’s too late.

Escape Rating A: Scandal in Babylon is simply a delicious read on so many levels. It’s such a juicy, gossipy story, and even if all the characters are fiction, it’s impossible not to wonder if they’re more “fictionalized” than truly imaginary. Certainly there were plenty of real-life scandals in Hollywood in the 1920s, and every decade thereafter, to make this fictional portrayal of that imaginary world wrapped in a fake world keeping the real world at bay feel, well, real.

Emma and Kitty are both survivors, and that’s a big chunk of what bonds their relationship. Emma is English, grew up in the household of an Oxford don, assisted her father with his research into ancient civilizations, attended Oxford herself and planned to follow in her father’s footsteps. Then the war happened and the flu epidemic of 1918 followed on its heels. By the time Emma recovered from her illness her young husband was dead on the battlefields, as was her brother, and her parents were carried off by the flu. She was alone and destitute, the last survivor of a veritable shipwreck that took her family and her future.

Kitty ran away from home, a wild child who made terrible choices in men and jobs and everything else but who kept picking herself up and reinventing herself until she found Hollywood – the ultimate reinvention machine.

Emma and Kitty are holding each other up in more ways than one. But it’s clear that Emma is the brains of this outfit, and it’s her brain that’s needed. She’s the first person who sees the puzzle, and she’s the one who eventually solves it.

But as fascinating as the mystery is – and it certainly is that, complete with oodles of misdirection and a whole net full of tasty red herrings – it’s the portrait of Hollywood in the 1920s, as the star making machinery is being exploited and invented with each new day and new film and new star that makes this story sing and dance.

Even if Kitty can do neither. She doesn’t really need to. Movies haven’t become talkies yet. And whatever Kitty lacks in acting talent, she makes up for in sheer star power. Kitty has “It” whatever “It” is. It’s up to Emma to make sure that she gets to keep it.

One last thing – as I was reading Scandal in Babylon, and wading through all the many scandalous events it touches on, there were three books that it reminded me of, one of which I had to hunt for a bit.

Even though it’s a different war and a different aftermath, Emma Blackstone and Gwen Bainbridge from The Right Sort of Man by Allison Montclair would have gotten along like a house on fire. A Touch of Stardust by Kate Alcott, is set more than a decade later during the filming of Gone with the Wind, but it has a similar feel to it. A story about Tinseltown and its scandals and gossips, as seen through the eyes of someone close to the action but not directly a part of it. And last but not least, The Pirate King by Laurie R. King, set in the same period as Scandal in Babylon and displaying the rackety nature of the fledgling movie industry while murder travels in the wake of an utterly farcical production. One even more farcical, in its way, than the historical farce, Temptress in Babylon, that Kitty is filming.

Scandal in Babylon is billed as the first book in a new Silver Screen Historical Mystery series. While this particular case is over, the way that the story wraps up does leave room for Emma to find herself in the middle of another investigation. And I certainly hope that turns out to be the case!

2 thoughts on “Review: Scandal in Babylon by Barbara Hambly”