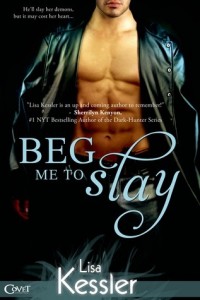 He’ll slay her demons, but it may cost her heart…

Four years ago Tegan Ashton was attacked. Determined never to be a victim again, she devotes her life to martial arts and self-defense. When her assailant returns to finish what he started, only one person can help her.

Gabe is a private investigator by day and demon slayer by night. After losing loved ones, he vows to defend people from a threat they don’t realize exists.

The relationship is supposed to be strictly business, but fighting demons together stirs up emotions they never expected. Turns out demon slaying is a breeze compared to facing their scarred pasts and even worse – hearts.

I always wanted Buffy to end up with Ripper, which would have required a time machine and somewhat of an attitude change on Ripper’s part before he settled down and became Giles. That almost makes sense if you look at it sideways.

But this story made some of these dreams come true, and in a really hot way. Only this slayer is the guy, and he hunts demons instead of vampires.

Work with me here, people!

Two people with the same secrets, except they both need some time to figure that out.

Four years ago, Gabe was lured away from his fiance by a demon attack on a woman who managed to escape. While he was saving the mysterious stranger, his fiance was brutally murdered.

Four years ago, Tegan escaped from a demon attack. Of course, no one believes her. She’s spent the past four years becoming a martial arts expert and trainer, opening her own dojo. She decided that she will not be a victim again.

Gabe has spent the past four years continuing his search for the demons that break through to our world from the hells. It’s his duty. He’s this generation’s demon slayer for the Van Helsing family. He’s also kept himself from becoming emotionally attached to anyone else.

Then Tegan sees her demon nightmare bury a woman in the sand on a webcam, and she starts looking for someone who can help her hunt him down. Someone like Gabe, who advertises his services as “Private and paranormal investigations”.

As soon as they meet, he knows that the demon is still hunting her. Her scar is a beacon. He tells himself that his need to bodyguard her is all about catching the demon; and not about sticking close to Tegan.

What Gabe doesn’t bargain on is Tegan’s refusal to let someone else, even a man as utterly delicious as Gabe, take away her right to deal with whatever happens to her. She will defend herself this time. She can take on whoever, or whatever comes.

Even if she has to cut out a demon’s heart with a bloody knife.

Even if Gabe takes her heart with him.

Escape Rating B+: I just found out this is a stand-alone story, and I am seriously bummed. I want more demon slayers. Why does there have to be only one?

Moving right along…Beg Me to Slay just begs for a sequel. Really. There absolutely have to be more demons that need slaying, and more yummy slayers in need of partners who can both kick down the armor around their hearts and kick demon ass.

Because that’s what this story is all about. Both Tegan and Gabe have chosen to wall themselves off from any emotional involvement after some serious emotional trauma. It makes sense.

But they are perfect for each other. Watching them fight their intense attraction at the same time they learn to fight demons together is just plain fun. And hot. And did I mention fun?

5 thoughts on “Review: Beg Me to Slay by Lisa Kessler + Giveaway”