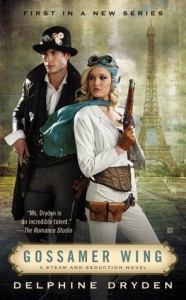 A Spy. An Airship. And a Broken Heart.

After losing her husband to a rogue French agent, Charlotte Moncrieffe wants to make her mark in international espionage. And what could be better for recovering secret long-lost documents from the Palais Garnier than her stealth dirigible, Gossamer Wing? Her spymaster father has one condition: He won’t send her to Paris without an ironclad cover.

Dexter Hardison prefers inventing to politics, but his title as Makesmith Baron and his formidable skills make him an ideal husband-imposter for Charlotte. And the unorthodox undercover arrangement would help him in his own field of discovery.

But from Charlotte and Dexter’s marriage of convenience comes a distraction—a passion that complicates an increasingly dangerous mission. For Charlotte, however, the thought of losing Dexter also opens her heart to a thrilling new future of love and adventure.

Gossamer Wing is a mixture of “pretend marriage” with “Mr. and Mrs. Smith” in a steamy (and somewhat angsty) steampunk world.

The alternate history is quite fun, the romance is suitably hard won and the steampunk adds just the right amount of engineered insanity to go along with the derring-do.

We have the engineer and the lady spy, entering into a pretend marriage for the good of jolly old England. Except that the marriage is real, and there will be a real divorce when the mission is over.

Dexter Hardison is also three things; a world-reknowned engineer, a baron, and unmarried. He is the best candidate to play Charlotte’s temporary besotted husband.

He’s already carried out several engineering commissions for her, he just didn’t know that her little dirigible, the Gossamer Wing, was a secret project of the government. He also didn’t know that the lady was beautiful. Or tempting.

Charlotte plans to go to Paris to retrieve the secret plans that her first husband hid on the roof of the opera house, just before the war ended. Their honeymoon and his subsequent death prevented him from retrieving them.

Charlotte believes that emotion clouds judgement. But then, she’s spent the four years since her first husband’s death pretending that she has none.

She learns differently. But when they arrive in Paris, her husband’s killer lays in wait to see if he can retrieve the secret plans that were his downfall.

Escape Rating B+: The steampunk in Gossamer Wing turns it into deliciously frothy fun, with a whole lot of steam heat in the romantic tension between Dexter and Charlotte.

Charlotte is interesting because she has trained herself to be a perfect agent; she’s always cool and controlled. She’s an actress playing a part because it means her life. She loved her first husband, but he was a part of her life long before their very short marriage. Her mission is about finishing his work. She doesn’t have a life beyond it. But her supposed grief, like so many other things in her life, is just another cover story.

Dexter is the really fascinating character. He is the “makesmith Baron” and doesn’t use his title in his business. He hasn’t disavowed it or anything rash, but he knows it puts his business contacts off, so he’s just Mr. Hardison when it comes to business dealings. Dexter is always genuine, and doesn’t ever pretend. He can’t manage to fake being married, either. His emotions are real, and that’s how the romance begins.

The alternate history is a treat. Britain never lost her colonies, so the “Dominions” are still part of the Empire, but they are a happy part. The other interesting thing is that Napoleon never seems to have arisen, but there was still some kind of French and English war at that period. Also there seems to have been something that wasn’t quite the French Revolution, but wasn’t quite not, either. It provides the opportunity for lots of background skullduggery, including something that reads a lot like a “cold war” between England and France. But then, England and France didn’t really get along until World War I. Of course they’re spying on each other. And spying on the spies.

The steampunk industrial revolution even allows for industrial espionage, which just adds more layers to the plot. The mystery behind the enigma is very nicely convoluted and provides tons of chances for misunderstandings all around. Opportunities that the author makes excellent use of! 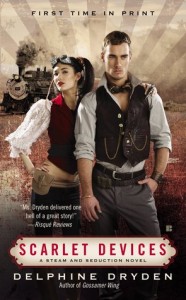 I adored the ending. Such a perfectly melodramatic bit of propaganda by both sets of secret agencies. I can’t wait to see where the next book in this series, Scarlet Devices, takes this story. 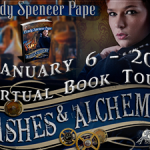 One thought on “Review: Gossamer Wing by Delphine Dryden”