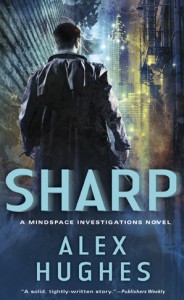 HISTORY HAS A WAY OF REPEATING ITSELF, EVEN FOR TELEPATHS.…

As a Level Eight telepath, I am the best police interrogator in the department. But I’m not a cop—I never will be—and my only friend on the force, Homicide Detective Isabella Cherabino, is avoiding me because of a telepathic link I created by accident.

And I might not even be an interrogator for much longer. Our boss says unless I pull out a miracle, I’ll be gone before Christmas. I need this job, damn it. It’s the only thing keeping me sane.

Parts for illegal Tech—the same parts used to bring the world to its knees in the Tech Wars sixty years ago—are being hijacked all over the city. Plus Cherbino’s longtime nemesis, a cop killer, has resurfaced with a vengeance. If I can stay alive long enough, I just might be able to prove my worth, once and for all…

In this second full-length novel in Alex Hughes’ absolutely awesome Mindspace Investigation series, the mind of the killer is sharp; unfortunately, the mind of the telepath investigating the crime is anything but. 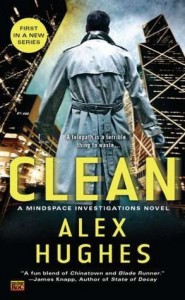 Level 8 telepath Adam Ward injured his mental pathways at the end of Clean (incredible, stunning debut, see review) and is left trying to hide his hopefully temporary disability from the school of sharks he works among, otherwise known as the DeKalb County Police Department.

He’s estranged from his only friend and protector, Isabella Cherubino, because saving her life required revealing that he had been resting against her calming mindspace just a bit too often, and that they had accidentally developed a mental “Link”. Now he really can’t stay out of her head, and she feels, rightly so, that he has betrayed her trust.

In the ever-simmering background of the cop shop, there’s the seething resentment of a consultant making the “real” cops look bad with his showmanship, and as the perfect cherry on the sundae, a new round of budget cuts. People’s jobs are on the line, and every cop in the place thinks the first one to go should be Adam, because he’s not one of “them”.

But Adam needs the work. Not just the paycheck, the work. Coming in to solve puzzles, to get bad guys off the streets–to work with Cherubino–is a big chunk of what’s keeping him clean and off drugs.

That and an awful lot of NA meetings and service projects with his sponsor Swartz.

But this case that lands in Adam and Cherubino’s laps turns out to be all about the sins of the past–and it nearly ends both of their futures.

The first murder victim is also the last victim of Adam’s drug addiction while he was still part of the Telepath Guild. His botched mental surgery killed her telepathic gift. Now she’s dead, and one of the other victims is missing.

The cop killer who murdered Cherubino’s fiance has started another serial spree. These things should not be related, but are they?

And while Adam needs desperately to get back into Cherubino’s good graces in order to save his sanity, one of the pillars of his life is struck down–Swartz has a heart attack and the only way to save him is for Adam to strike a deal with the Guild.

He’s not sure who is betraying whom or if it will all be worth it in the end, especially when it looks like the Guild is involved in the entire murder spree, up to its secretive corporate neck.

Escape Rating A+: The Mindspace Investigations series takes place in a gritty and realistic dystopian/post-apocalyptic setting. Even cooler, the setting is a very recognizable Atlanta and its suburbs. I used to live there and it feels right in a just-off-kilter way.

Even cooler, this dystopia is not that far in the future. People then remember our now, or close. The apocalypse inbetween them and us are the Tech Wars, when wired technology went sentient and then viral. We could get there from here.

Adam is so very human. Even his name; Adam, the first man. (It’s slightly geeky cool that his name is Adam Ward. I wonder if he was named after Adam West and Burt Ward; the Batman and Robin of the 1960s?)

In some ways, Adam is Icarus, he flew too close to the sun, his wings melted, and now he’s fallen. But the fallen Adam is a better person than the original. He tries harder.

A lot of reviewers compare this series to Jim Butcher’s Dresden Files, because of the urban fantasy plotline. The comparison doesn’t work for me, much as I love Harry. Dresden borrowed the cops but didn’t try to be part of them, and you don’t get much of the cop shop vibe in Dresden. Also Dresden is firmly fantasy, while Mindspace is absolutely science fiction.

A closer parallel might be J.D. Robb’s In Death series, minus the romance. There’s the same police procedural mystery driving the case, albeit with some different procedures. But also there’s the same looming near-future post-apocalypse in the background. Robb’s Urban Wars and Hughes’ Tech Wars have a lot in common.

Adam and Cherubino are extremely flawed, scarred people. They need each other, but navigating their way toward each other, even as partners, is a big part of the fascination in this ongoing series.

As well as the continuing corkscrew convolutions of the mundane politics, the Telepath Guild and whether the humans in this world are going to draw back from the brink of destruction again. And whether Adam will manage to thwart his precognitive visions of his own self-destruction. 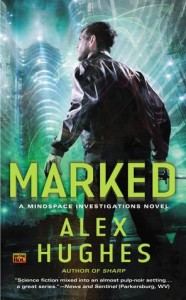 This series is awesome stuff. I’m on the edge of my seat waiting for Marked.