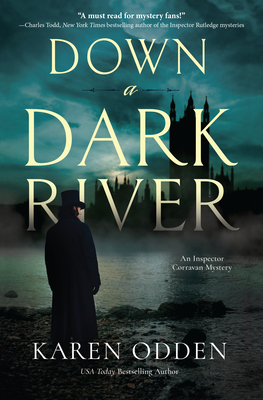 In the vein of C. S. Harris and Anne Perry, Karen Odden’s mystery introduces Inspector Michael Corravan as he investigates a string of vicious murders that has rocked Victorian London’s upper crust.
London, 1878. One April morning, a small boat bearing a young woman’s corpse floats down the murky waters of the Thames. When the victim is identified as Rose Albert, daughter of a prominent judge, the Scotland Yard director gives the case to Michael Corravan, one of the only Senior Inspectors remaining after a corruption scandal the previous autumn left the division in ruins. Reluctantly, Corravan abandons his ongoing case, a search for the missing wife of a shipping magnate, handing it over to his young colleague, Mr. Stiles.
An Irish former bare-knuckles boxer and dockworker from London’s seedy East End, Corravan has good street sense and an inspector’s knack for digging up clues. But he’s confounded when, a week later, a second woman is found dead in a rowboat, and then a third. The dead women seem to have no connection whatsoever. Meanwhile, Mr. Stiles makes an alarming discovery: the shipping magnate’s missing wife, Mrs. Beckford, may not have fled her house because she was insane, as her husband claims, and Mr. Beckford may not be the successful man of business that he appears to be.
Slowly, it becomes clear that the river murders and the case of Mrs. Beckford may be linked through some terrible act of injustice in the past—for which someone has vowed a brutal vengeance. Now, with the newspapers once again trumpeting the Yard’s failures, Corravan must dredge up the truth—before London devolves into a state of panic and before the killer claims another innocent victim.

This first book in the Inspector Corravan series begins in the middle in a way that just plain works. For one thing, Corravan is 30 or thereabouts, meaning that he had not just a life but an adult life for years before this story begins. Howsomever, the book does a terrific job of telling the reader enough about his previous life AND his previous cases for us to get a feel for the man as a character as well as how good he is at his job and how often he rubs his superiors the wrong way.

It’s also a bit in the middle when it comes to the circumstances of Scotland Yard and the London Metropolitan Police Department. The situation that the department is in when we first meet Corravan is taken from history. The corruption trial that rocked the Met and still influences the public’s acceptance or lack thereof towards the police really happened. The man who is in charge of the newly formed CID (Criminal Investigation Department) that Corravan serves is a fictional avatar of the real C.E. Howard Vincent who held that position at the time this book takes place..

So the story is grounded in the real a bit more deeply than the usual historical mystery, and that’s part of what makes the story so fascinating. But the truly compelling part of this story is the mystery itself. As it should be.

It all starts with the discovery of a woman’s body floating down the Thames in a lighter, a small boat used to carry cargo along the river. She’s relatively young, blond, pretty and appears to have been well-off if not outright wealthy based on her clothing and her physical condition. She wasn’t raped, but the skirt of her dress was cut open, her wrists were slashed post-mortem and there were flowers in the boat.

Whoever killed her, whyever they did it, the dead woman left behind a fiancé, parents and friends who loved her and are devastated by her death. Corravan begins an investigation, under pressure from his superiors, who are under pressure from theirs. Everyone wants the murder solved before the public loses even more confidence in the police.

A week later there’s a second body. Then a third who the mysterious killer lets go, possibly because she’s pregnant. Corravan is out of his mind, losing his temper, and losing his battle against the demon drink all at the same time.

Because the victims seem to have nothing in common save their gender, station and appearance. He’s not making any headway and the powers-that-be are losing patience – although not as fast as Corravan is. 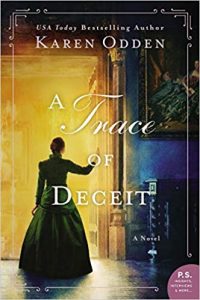 Just when he’s at his wit’s end – and about to be demoted for it – a key witness steps out of the shadows. He learns just how heinous this crime really is – and just how hard it will be to bring absolutely everyone responsible to any kind of justice.

Escape Rating A: I picked this up because I read and enjoyed two of the author’s previous books, A Dangerous Duet and A Trace of Deceit, also Victorian-set mysteries. And also books that center women’s stories and women’s lives even though much of the investigation is driven by a male protagonist.

So when I learned this book existed, I was happy to set aside the books I’d bounced off of this week and dive right in. Especially as I was even more tempted by the description of the story appealing to readers of C.S. Harris and Anne Perry, as I loved both authors’ 19th century-set mystery series.

While Down a Dark River resembles C.S. Harris’ Sebastian St. Cyr series in the way that it is so firmly grounded in its time and place, and the way that it borrows from real history using real people as secondary characters, the true resemblance is to Anne Perry’s Charlotte and Thomas Pitt series and her William Monk series. Corravan’s background – and his temperament – resemble Monk, but the time period in which this series is set makes him contemporaneous to the Pitts. A time when the world was obviously changing as a result of the Industrial Revolution, both for good and for ill.

This case, as Corravan himself remarks, feels like a new kind of crime. He’s chasing a serial killer – someone organized but with a deranged mind or at least worldview. Not someone who kills in the heat of the moment, but someone who plans meticulously and seeks out victims who make sense for reasons that exist only in his own head.

The process of the investigation, and the way that Corravan nearly loses not just control of it but control of himself, gives us a window into a fascinating character who does not want to adapt to the times or the circumstances, only to discover that the cost of not doing so is greater than he is willing to pay. 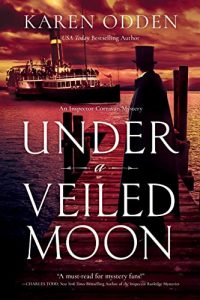 Earlier I said that this book centers women’s stories and lives in spite of its male protagonist. And the way that is worked out in the story made for a compelling twist that carries the reader, the detective and eventually his department along to a stunning conclusion that satisfies in one way but can’t possibly do so in another.

Nor should it, which is what made this so very good.

I expected to like this, but I didn’t expect to love it as much as I most definitely did. So I’m very happy that Inspector Corravan’s investigations will continue later this year in Under a Veiled Moon. 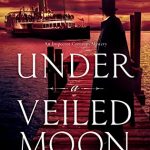 5 thoughts on “Review: Down a Dark River by Karen Odden”