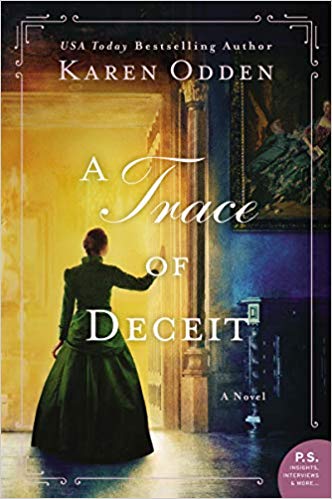 From the author of A Dangerous Duet comes the next book in her Victorian mystery series, this time following a daring female painter and the Scotland Yard detective who is investigating her brother’s suspicious death.

A young painter digs beneath the veneer of Victorian London’s art world to learn the truth behind her brother’s murder...

Edwin is dead. That’s what Inspector Matthew Hallam of Scotland Yard tells Annabel Rowe when she discovers him searching her brother’s flat for clues. While the news is shocking, Annabel can’t say it’s wholly unexpected, given Edwin’s past as a dissolute risk-taker and art forger, although he swore he’d reformed. After years spent blaming his reckless behavior for their parents’ deaths, Annabel is now faced with the question of who murdered him—because Edwin’s death was both violent and deliberate. A valuable French painting he’d been restoring for an auction house is missing from his studio: find the painting, find the murderer. But the owner of the artwork claims it was destroyed in a warehouse fire years ago.

As a painter at the prestigious Slade School of Art and as Edwin’s closest relative, Annabel makes the case that she is crucial to Matthew’s investigation. But in their search for the painting, Matthew and Annabel trace a path of deceit and viciousness that reaches far beyond the elegant rooms of the auction house, into an underworld of politics, corruption, and secrets someone will kill to keep. 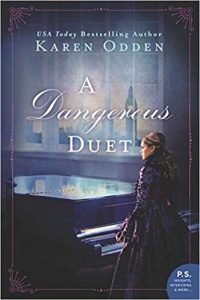 “I think all our memories have a trace of deceit in them,” at least according to Inspector Matthew Hallam, the hero of our story – and of the previous book in this series, A Dangerous Duet.

He’s not wrong, not in the context of the story, and not in real life, either. It’s been said that looking at a memory is like opening a page in a book, and that every time we do so, we change it just a little bit – blur the edges, smudge a section, make it sound better – or worse – until the original memory has been altered into the memory of the story we tell ourselves – and everyone else.

Annabel Rowe has spent most of her adult years telling herself the story of how her brother Edwin abandoned her. And he did. Edwin fell into drink and eventually drugs at school, and didn’t quite manage to fall out until after a prison sentence made him rethink his life. It probably helped that the man Edwin was rebelling against, their father, was dead.

But Edwin and Annabel had been best friends and close companions as children. And when Edwin was sent off to boarding school, things changed – and not for the better. He did more than leave her behind – as was inevitable. He stopped communicating. And then, like so many addicts, he started making promises he couldn’t – or wouldn’t – keep.

He seemed to have turned over a new leaf after prison. Now Annabel and Edwin, both artists, both living on their own in London, had begun a tentative friendship. Annabel was beginning to trust again – but just couldn’t let go of her old hurts. Hurts which were real and legion. She feared, reasonably so, that Edwin would slide back into his old habits and abandon her again.

They were both young, there was plenty of time to get back to where they used to be – or at least an adult approximation of it.

Until the day that Annabel went to Edwin’s flat and found the police, in the person of Inspector Matthew Hallam, inspecting the scene of his death.

Time has run out for Annabel and Edwin to repair their relationship. But it has just begun on Annabel’s opportunity to provide justice for the brother she still loved. If she and Hallam can manage to figure out exactly why Edwin was killed.

At the heart of this case lies yet another deceit of memory.

Escape Rating A-: I liked A Trace of Deceit better than its predecessor, A Dangerous Duet. The first story was very plot driven, and it felt like the characters, particularly its central character Nell Hallam (Matthew’s sister) was a vehicle for the plot rather than a fully-fleshed out person. (That all being said, it feels like the link between the two books is fairly loose, and this book can definitely be read as a stand-alone.)

A Trace of Deceit, on the other hand, was very much Annabel’s story. She feels like a more rounded person as we explore not just where she is now, but her childhood, her relationship with her brother, with their parents, and her conflicted feelings about who she is and where she’s been.

While I did figure out what happened to Edwin in the past, what made him change, fairly early in the investigation, this is not after all Edwin’s story. And I understood and empathized with Annabel’s need to finally figure out the person her brother had been and what made him that person – and what led to his death.

The title of the story is ironic in a way. Annabel had remembered her childhood with Edwin as being less bright than it was in order to sustain her caution and mistrust. In her investigation of his murder she reclaims the brighter memories of their childhood. Even as she wonders whether they have only become so bright because she needs them to be, or whether she suppressed them because they only made Edwin’s frequent betrayals sharper.

But Edwin’s death is the result of someone else’s deceitful memories. Someone who has cast Edwin as the villain of their story rather than tarnish the image of someone they held dear.

So, I enjoyed the story and found the mystery fascinating. But what made the book for me was the character of Annabel and the way that she fit into her setting. One of the things that can be difficult about female protagonists in historical fiction is the need for the character to have agency and yet not seem out of her time in either attitudes or opportunities. Annabel feels like she belongs. Her story was set at a time when women could just manage to have an independent life if circumstances aligned. She has just enough income to keep herself, but has to be frugal about her expenses. She lives on her own and that’s accepted and acceptable. She doesn’t expect anyone to rescue her or take care of her – and she’s right not to do so. Nothing is easy for her as a woman alone – but it is possible in a way that feels right.

I read this one in a single day and felt like the story closed properly and yet I was a bit sad to see it end. Not that I wanted Annabel’s travails to go on a moment longer – more that I was hoping there would be an opportunity to visit her again.

2 thoughts on “Review: A Trace of Deceit by Karen Odden”