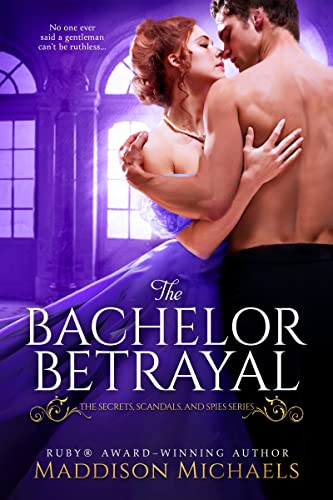 He wants justice
Underestimating Marcus Black is the last thing his enemies ever do. After all, the respected Earl of Westwood is a deadly threat… when her Majesty needs him to be. And his only goal is to avenge his brother’s murder. Which would be much easier if the viciously-skilled Lady Kaitlyn Montrose wouldn’t swoop in, knee him in the bollocks, and then run off with his only lead…
She wants revenge
Kat is determined to avenge her beloved uncle’s murder and nothing will stop her. Especially not the devastatingly handsome, and equally lethal Marcus Black. The fact that he’s after the same target is a complication she hadn’t planned on. And as much as she enjoys taunting him, she has a job to do—one that doesn’t include sparring with the infuriating man at every turn. Except Kat has a new plan… one that Marcus will just hate.
Now they’ll have to work together… if they don’t kill each other first
Individually, Marcus and Kat are deadly. If they worked together, they could be unstoppable. But when attraction gets in the way of vengeance, it’s more than hearts on the line. And only one person can win...

There are three threads to this story. The part of that braid that we are introduced to first is the revenge story, as Kat Montrose watches her guardian and beloved uncle die on the street after an attack by a foreign agent known only as “The Chameleon”. The second strand of that braid is the instant attraction between Kat and Marcus Black – an attraction that is as inconvenient and inappropriate as it is irresistible.

Last but not least, the central thing that ties those two pieces together is the “Great Game” of power, politics and general one-upmanship that was conducted between the British Empire and the Russian Empire in places and with proxies all around the world, but most especially in Central and South Asia.

It’s the playing of this game of lives, fortunes and futures that eventually resulted in World War I. But at the point of this story in 1884-85, it’s mostly a spy game. A spy game in which Kat, Marcus, Kat’s late uncle AND the Chameleon have all played their parts.

Kat, formally Lady Kaitlyn Montrose, is a spy, a member of Her Majesty’s War Office. So is Marcus Black, the Earl of Westwood. Both were trained by her late uncle in the work. When he was killed, Kat began her search for the Chameleon, intending on taking “an eye for an eye”, the Chameleon’s life for her uncle’s.

But the Chameleon has been avoiding people like Kat for years, all too successfully. No one has ever been able to discover the identity of the elusive assassin. Kat needs a bit of assistance in tracking the Chameleon down. Assistance that she expects to garner in the form of the Earl of Westwood, who should want to avenge her uncle – his mentor – as much as she does.

Westwood has been hunting the Chameleon for far longer than Kat has been looking, and Victor’s death only adds to the reasons for his pursuit. He doesn’t want Kat getting in his way – or honestly working the case at all. Nor does he have any hope of stopping her.

Which doesn’t keep him from trying for entirely too long.

But the Chameleon is working through a hit list of the highest echelons of the War Office. Kat and Marcus will have to work together to stop the decimation of Britain’s intelligence services while war looms on the horizon.

Too bad they’re spending so much time fighting a war with each other to find the source of the threat before it’s nearly too late. 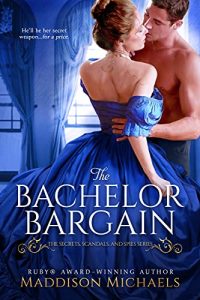 Escape Rating B: I loved the opening of this. The whole idea of a female spy in Victorian England had the potential to be so much fun! And the first scenes, with Kat burgling some papers then decimating the thugs who try to stop her  – was fantastic. That Kat has a burning line of snark for such circumstances was icing on the cake.

But the cake turned out to be more of a cupcake.

Kat is still an utterly fascinating character, and she does continue to kick ass and take names throughout this story. I especially loved her friendship with Livie (heroine of the first book in the series, The Bachelor Bargain) and Etta, and their joint publishing venture to take down the unrepentant asshole noblemen who abused women and didn’t think they’d have to pay for their perfidy. That was excellent. (I haven’t read the first book – yet – but didn’t feel like I’d missed anything essential. Just that I might have missed a good reading time!)

And I can’t say that I didn’t like her budding relationship with Westwood, because that certainly had oodles of passionate potential, which it mostly fulfilled. What fulfilled less, at least for me, was the degree to which he just plain refused to accept that Kat was NEVER going to submit to his protection and was not under any circumstances going to hold herself back from the investigation. Marcus wants Kat to be safe, and takes much too long to acknowledge that safety was about the last thing that Kat was built for.

If he hadn’t been aware of how she was raised and trained – and intimately aware at that because he was trained by the same person – it would have made more sense. His behavior would have been the expected thing for that time and place. But he went into this mess knowing that Kat was absolutely NOT the expected thing so treating her as if she was was going to get him nowhere but an argument. The repetition went on too long, and Kat in particular was a bit too angsty about her developing feelings. She was portrayed as a person of action at every turn and the moody angst just didn’t “feel right”.

On the other hand, the case was a cracking good one – and the solution was nothing like I expected at all. The Chameleon was both clever and totally unexpected, adding a frisson of danger and temptation to the scenario that made the whole thing that much more diabolical and entertaining.

In other words, mixed feelings. The way the romance worked didn’t quite fit the characters of Kat and Marcus as they were drawn, but I was certainly sold on them being meant for each other. I certainly liked this more than enough to consider picking up the previous book in the series, The Bachelor Bargain, the next time I’m in the mood for a romantic spy story.

One thought on “Review: The Bachelor Betrayal by Maddison Michaels”