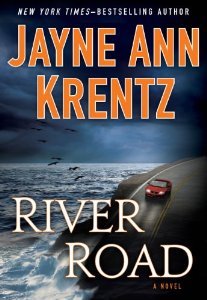 It’s been thirteen years since Lucy Sheridan was in Summer River. The last time she visited her aunt Sara there, as a teenager, she’d been sent home suddenly after being dragged out of a wild party—by the guy she had a crush on, just to make it more embarrassing. Obviously Mason Fletcher—only a few years older but somehow a lot more of a grown-up—was the overprotective type who thought he had to come to her rescue.

Now, returning after her aunt’s fatal car accident, Lucy is learning there was more to the story than she realized at the time. Mason had saved her from a very nasty crime that night—and soon afterward, Tristan, the cold-blooded rich kid who’d targeted her, disappeared mysteriously, his body never found.

A lot has changed in thirteen years. Lucy now works for a private investigation firm as a forensic genealogist, while Mason has quit the police force to run a successful security firm with his brother—though he still knows his way around a wrench when he fills in at his uncle’s local hardware store. Even Summer River has changed, from a sleepy farm town into a trendy upscale spot in California’s wine country. But Mason is still a protector at heart, a serious (and seriously attractive) man. And when he and Lucy make a shocking discovery inside Sara’s house, and some of Tristan’s old friends start acting suspicious, Mason’s quietly fierce instincts kick into gear. He saved Lucy once, and he’ll save her again. But this time, she insists on playing a role in her own rescue . . .

I enjoyed reading River Road so much that it was surprisingly difficult to crystallize my thoughts into a review!

One utterly marvelous thing is that this is a stand-alone story, and sometimes those feel rare. As well as this one weaves past and present, it is complete within the very tight confines of itself; we have the beginning, middle and end wrapped up. No cliffhanger, no next book, no loose ends.

But there’s still a love story that takes its time to develop in the present. One of the things that makes that love story “sing” is that it is also a second chance at love story. In the case of the past influencing the present, in the “way back”, he was her first crush, but as adults, that three-year age gap is immaterial.

There are two stories in River Road. One is about the past haunting the present. Thirteen years ago Lucy Sheridan’s Aunt Sara murdered Tristan Brinker and bricked his body up inside her fireplace. After Sara’s death, Lucy and Mason Fletcher re-open Sara’s terrible “do-it-yourself” job on that fireplace and discover Tristan’s body; along with evidence indicating that the young man was the “Scorecard Rapist” who police had been unable to capture thirteen years ago.

On the long ago night that opens the story, when Mason Fletcher rescues Lucy from one of Tristan’s famous beach parties at Summer River, Lucy had been Tristan’s next intended victim. Instead, Mason gets Lucy out of the party, Sara gets Lucy out of town, and Sara puts Tristan out of everyone’s misery.

Thirteen years later, Sara and her domestic partner Mary are killed in a car accident on a lonely road, and after the body is discovered in the fireplace, Lucy suddenly isn’t so certain that the “accident” was accidental; especially after an arsonist dies while setting her aunt’s house ablaze and she discovers that she has inherited either money or trouble as the result of not Sara’s, but Mary’s shares in a local investment firm.

And it all relates to the people who were the other victims of Tristan Brinker and that long-ago summer.

Escape Rating A+: I could not put this down, to the point that I was carrying the book around with me so I could get in a few more pages…just a few more paragraphs…

River Road is an absolutely terrific romantic suspense story, with a definite emphasis on the suspense. Krentz did a marvelous job of continually interweaving the past with the present, all the while making the old case both relevant to the present investigation but not taking the reader’s focus on the present-day skullduggery. Of which there was plenty.

The suspense plot was edge-of-the seat tense in this story. Every puzzle piece fit neatly into the ones we had already seen, and yet, I still didn’t know whodunnit until the very end. I had some ideas that some people didn’t exactly have clean hands, but not who the real evildoers were.

And there is one stand up and cheer moment as the story concludes, you’ll be surprised about that, too.

But there’s also a slowly developing love story between Lucy and Mason, and it’s just right. In the prologue, he’s an adult, just barely, and she isn’t quite yet. He’s protective and too much for her, and she knows it. As adults, they are equal. He’s still overprotective, but she doesn’t let him be. They need something from each other. And they need to solve the mystery, because they were both part of what happened in the past, and they are both targets in the present. But their caution makes the romance burn slow and hot.

Excellently well done all the way around. If you enjoy romantic suspense, you’ll love River Road.