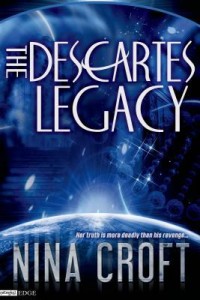 Lucas Grafton has spent the last ten years hunting the Conclave, a secret organization who took everything from him: his wife, his child, his very identity. Now he has a lead—an imminent terrorist attack on London—code-named Descartes.

Born with a genetic illness, Jenna Young has always known she was different. But the unexpected death of her father catapults her into a world of murder and terrorism she never expected. In order to stay alive, she must solve a twenty-five year old mystery—and her only ally a hard bitter man in search or retribution, her only clue the Descartes Highlands, an area on the near side of the moon.

Luke’s need for revenge collides with Jenna’s hunt for the past, and together they must stand against the Conclave. All the while uncovering the truth behind Jenna’s illness, a truth that will make Jenna question her very humanity.

The Descartes Legacy takes a fairly standard romantic suspense story and enhances it with a bit of science fiction in order to create a “can’t stop reading” experience.

All the elements of romantic suspense are right there; heroine experiences a major life change event that makes her investigate something mysterious. Said investigation pushes the buttons of some very shady customers and heroine finds herself in serious jeapardy without knowing why. In swoops hero to save her life and help her with her investigation. Bad guys continue to pursue for nefarious reasons. Heroine makes life-changing discovery. Evildoers attempt to suppress heroine’s knowledge. After climactic fight, hero and heroine start new life together.

Just because something follows a formula, doesn’t mean that the author hasn’t taken the elements of that formula into new and interesting directions. In the case of The Descartes Legacy, those elements were born on the moon.

She thinks she’s sick, so she turns to another doctor to get the medication she needs. Her friend gets tortured and killed, and she has no idea why.

Her father didn’t just lie, he covered up his part in a world-spanning power-hungry organization called “The Conclave”. An organization whose genetic experimentation both created Jenna, and ordered her “termination” at age 4.

Jenna’s always known she was different. But as she is forced to dive into the murky politics of The Conclave, she discovers just how different she is.

And Jenna’s not the only one peering into the depths of the Conclave’s evil, nor is the death of her doctor-friend the only torture-and-murder to be laid at their door.

Lucas Grafton has been looking for revenge against that organization for ten years, since they murdered his wife and daughter. But Luke’s search for justice runs him headlong into Jenna’s need for the truth.

Luke starts out uncertain whether Jenna is an innocent bystander, a co-conspirator, or bait in a trap. Eventually he discovers that she is all three, but by then, he’s willing to sacrifice anything to keep her safe.

And she feels the same way about him.

Escape Rating A-: The story ends with a series of stunning revelations that make the reader yearn for more. It doesn’t feel so much that things have concluded as that there is a pause in the action. Jenna and Luke’s story isn’t over, and I want to know what happens next. Very, very much.

The science fictional elements in The Descartes Legacy are of the “laboratory” variety rather than the space ship type. It’s not just that Jenna was created through some very tricky genetic engineering, but it’s the source of some of her genetic material that pushes the story through the science fiction envelope.

The “Descartes” in the title is not a reference to Renaissance philosopher and mathematician René Descartes, at least not directly. It refers to the Descartes Highlands on the moon, and to Apollo 16’s mission there.

The Conclave is a many-headed, completely heartless beast of an organization. The plot that Jenna and Luke discover is chilling in its inhumanity. Discovering the nature of that plot and stopping it add to the breakneck pace of the story.

But this is also a romance, and that part of the story hinges on the chemistry between Jenna and Luke. For all the science fiction, their story together has a few too many times when Jenna is a drugged and helpless captive, waiting for Luke to rescue her. Considering the powers she discovers during the story, she gets kidnapped a bit often.

And there was definitely a touch of insta-love in their relationship. But the thriller and suspense elements still kept me racing to finish the story.

2 thoughts on “Review: The Descartes Legacy by Nina Croft”