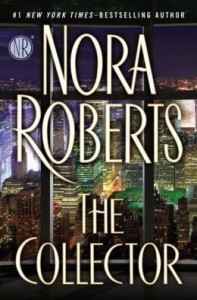 When professional house-sitter Lila Emerson witnesses a murder/suicide from her current apartment-sitting job, life as she knows it takes a dramatic turn. Suddenly, the woman with no permanent ties finds herself almost wishing for one. . . .
Artist Ashton Archer knows his brother isn’t capable of violence—against himself or others. He recruits Lila, the only eyewitness, to help him uncover what happened. Ash longs to paint her as intensely as he hungers to touch her. But their investigation draws them into a rarified circle where priceless antiques are bought, sold, gambled away, and stolen, where what you possess is who you are, and where what you desire becomes a deadly obsession. . . .

I picked this up over the weekend instead of any of the fifteen other things I should have been reading because, well, Nora Roberts writing romantic suspense again. When she’s good, she’s very, very good. And The Collector was definitely one of the good ones!

There are shades of the movie Rear Window in the suspense part of this story, as professional house-sitter Lila Emerson witnesses a murder by people watching from the patio of her current gig. She sees someone shove a woman out of the window of a highrise to her splattered death on the pavement below. She’s on the phone with 911 as she watches the argument across the way escalate from abuse to death.

That should be the end of Lila’s involvement, all most of us would do is give our statements to the police and go on about our lives. Not that it wouldn’t affect us, but that we wouldn’t become more and more enmeshed in the investigation and the lives of the people affected by that one plummeting fall.

Lila can’t seem to resist involvement. Everywhere and with everything, but only to a limited extent. She lives her life out of two suitcases, constantly moving from house-sitting to apartment-sitting, always traveling and never putting down roots. But she’s a professional at getting people to open up and tell her their life stories.

While that is partly the fodder for her successful writing career, it is also her way of blending in to her environment. As a military brat, she was always packing up, moving on, and trying to make a place for herself in a new home. Now she does it by choice.

Ashton Archer is involved because he feels has no choice. His brother Oliver was on the other side of that window where Lila witnessed the murder, and Oliver is also dead. At first, the police tried to write the combined deaths off as murder-suicide, but the forensic evidence ruled that possibility out fairly quickly. Which means that both his brother and his girlfriend were murdered by a third party.

Ashton, used to cleaning up his brother’s messes and taking care of entire extremely extended family, steps in to try to find justice in his brother’s case. Or failing that, vengeance. Ashton’s road to answers leads through Lila.

Unfortunately for them both, someone else’s road to riches leads through the same case. for those people, Lila and Ashton are messy loose ends that need to be tied up. Permanently.

Escape Rating A-: This combination of suspense, romance and treasure hunting turned into a story that I couldn’t break away from. There were multiple storylines packed into this one case, and every single one revolved around a fascinating and/or very likeable character.

Lila and Ashton start out as slightly wary allies. He needs to investigate his brother’s murder. She can’t let the mystery go. But as they join forces to solve the crime, they become intimately involved with each other, in spite of Lila’s deep inner need to control her own life, and Ashton’s inability to stop controlling the lives of the people he cares for. Even as they fall for each other, the peace between them is often uneasy. It takes a long but realistic amount of time for them to work toward compromise in their personal relationship.

The suspense part of the story combined present-day art theft with a marvelous history lesson into the creation and collection of the famous Fabergé Eggs commissioned by the Russian Tsars.

Everything that has happened has been about one of the lost Fabergé Eggs, The Cherub with Chariot (and it really is lost) and one man’s obsession with possessing it. Oliver found it and tried to double-cross someone who was much too big for him, and the result has left a number of bodies in the wake. A collector who wants it not only bad enough to kill for it, but who keeps an assassin on his payroll just to clear up his loose ends.

The assassin is every bit as important (and interesting) a character as the hero and heroine. She lives to kill, and to collect prizes from her victims, and she’s targeting Lila and Ash because they keep showing her up.

The story is the dance between Lila, Ashton and the assassin Jai, and it’s a perfectly performed Russian troika, right up until the end.

One thought on “Review: The Collector by Nora Roberts”