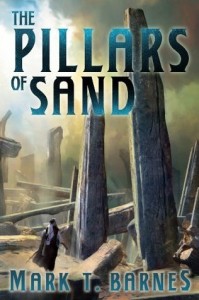 The epic conclusion of the Echoes of Empire trilogy.

Prophecy declared that corrupt politician Corajidin would rule the Shrīanese Federation, even become its new Emperor?and sinister magic has helped him defy death in order to do it. But his victory is not assured, thanks to clashing rival factions that hinder any attempts to unify the nation. Though he has taken increasingly brutal measures to eliminate all obstacles in his path, the dark forces supporting him grow dangerously impatient. And the harder they press, the more drastic Corajidin’s actions become.

Soon, only his most powerful adversaries will stand in his way: Indris, the peerless swordsman and sorcerer who has long fought to end the Federation’s bloody turmoil; and the warrior-poet Mari, Corajidin’s own daughter and the woman Indris loves. Fate has torn them apart, forcing them into terrifying personal trials. But if Indris can bring to bear the devastating knowledge of the Pillars of Sand, and Mari can rise up as a rebel leader, Corajidin’s enemies will rally?and the decisive battle for the soul and future of the Shrīanese will begin.

This epic tale of intrigue, love, and betrayal, painted in the blood of allies and enemies by Mark T. Barnes, concludes the Echo of Empire trilogy that began with “The Garden of Stones” and “The Obsidian Heart.”

The Pillars of Sand is an absolute stunner from beginning to end. Even the opening synopsis that recaps the events of the previous two books reads like an awesome story being told around a campfire, reciting the tales of the legends that have gone before.

But don’t rely on that summary if you haven’t read the first two books in the Echoes of Empire series, get yourself a copy of the utterly fantastic first book, The Garden of Stones and then continue breathlessly through the heroes’ valley of the shadow in The Obsidian Heart. You’ll be panting to read The Pillars of Sand just to find out how our heroes, their country, and their world get out of the horrible fix that they are in.

The story is again told from three different points of view, Dragon-Eyed Indris, for whom every faction seems to have a different destiny, none of which he remotely desires; his lover Mariam of the House of Erebus, one of the greatest warrior-poets that Shrian has ever produced, and her father Corajidin, the man who would lead Shrian to horrific greatness at incalculable cost.

Corajidin’s story is much like Macbeth’s; he believes that he has a destiny to rule Shrian, so he brings that destiny about no matter what dark powers he needs to consort with or how deep the madness into which he must descend. He never seems to understand that destiny is a two-edged sword, and that the prophecy he follows also predicts that he will not be able to hold onto anything, or anyone he conquers.

In our terms, he has sold his soul to the devil, but it turns out that he is dealing with beings even more fell than our version of Satan.

Mariam is Corajidin’s daughter, but she was raised to have her own mind and her own purpose. She believes in the ethics and morals that founded Shrian, and not the depths to which her father would sink them. And so she becomes a force for good, or at least better.

Indris is the great puzzle. He has acquired so much power, but he fears, with good reason, to use it. He knows that if he lets what is inside him loose, the power will use him. And so will entirely too many people who have been hiding the truth from him for far too long.

But they were right, some truths are too unbelievable to know. And yet, they must be revealed in order to save what can be saved. However little that might be. 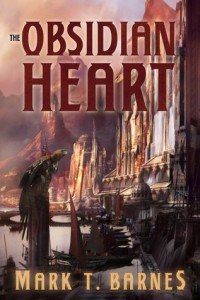 Escape Rating A+: Mark Barnes did it again. I stood at the bus stop with my mouth gaping open, completely overwhelmed by the ending. Also terribly, terribly sad that I will not get to return to Shrian.

I expected a slightly different ending. I’m much happier with the one I got, but I was expecting something darker. Not that the butcher’s bill in the end wasn’t high, but it wasn’t outrageously high. Sadly, just enough and not too much.

One of the things that fascinates about the story and it’s entire construction; The Echoes of Empire, as a whole, is about the evil that men (and women) do to each other. It is a battle between good and evil, but all the players are some variation of people, not deities or demons. (In some cases they may be dead people, but still people).

Humans and their equivalents do not need any help in finding the path to damnation and destruction. We’re quite good at getting there all on our own.

The Pillars of Sand brings the Echoes of Empire to a beautiful, and shattering conclusion. If you love epic fantasy and have not started this series, I envy you the joy of discovering this marvelous series for the first time.