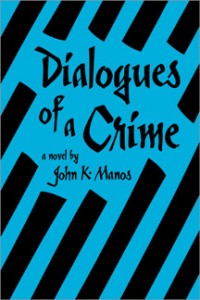 1972. The Chicago Mob stands unchallenged, and college students with drugs provide fodder for political point-making. Michael Pollitz, a nineteen-year-old with connections to the Outfit, becomes one of those political pawns.

1994. Job-weary CPD Detective Larry Klinger becomes obsessed with a cold case from that pivotal moment twenty-two years ago. In the course of his investigation, he encounters questions of ethics, guilt, and justice that make him doubt certainties that have sustained him for decades.

Dialogues of a Crime examines guilt, innocence and the long-term ramifications of crime and punishment in a gray area where the personal lives of perpetrators, victims and law officers overlap.

I was surprised at how absorbing this story was, even though it wasn’t quite what I thought it would be.

Obviously, based on the title, I thought it would be about a crime, and either someone would get away, it would turn out to be justified, or the perpetrator would suffer his or her due punishment.

Instead, we have a series of character portraits revolving around events in 1972. Yes, there was a crime, and yes, there were punishments, just not the way you expect.

We also have the story of the long twilight fall of the Chicago Mob, from a position of heavy-handed influence to death in the shadows.

In 1972, a kid is more-or-less railroaded into a plea deal that sends him to prison. It all seems like the worst coincidence of circumstances, but it turns out differently than expected because Michael Pollitz has connections, and because the Mob casts a long shadow.

There are two crimes; one is that Pollitz got caught up in the war on drugs and a politician’s need to be seen cleaning up the college campuses. All he did was show an undercover agent to a dorm room where he could buy drugs. It was the sort of thing that probably everyone knew and anyone would have done. The difference is that Pollitz is the only one of the college kids to do time, because his parents were too scared and too proud to take help from Michael’s best friend’s father, the head of the Chicago crime family.

When Michael is raped, beaten and brutalized in prison, the perpetrators are marked for death. Michael’s connection to the crime, and to the mob, come to light 20 years later, in the investigation by a cop who starts out thinking that murder is never justified, and ends up wondering who exactly was harmed in this particular crime.

We’re left with the same questions. Not just about “who dunnit”, but also who suffered for it and who deserved to. In the end, it doesn’t matter if Michael Pollitz committed the murders, requested them, or just celebrated afterwards.

He’s felt the sting of it all his life, both the crime committed against him and the ones that he might have influenced. It haunts him, and it haunts the reader.

Escape Rating B+: I was caught up in this from the moment that the rather late investigation starts, because the CPD cop, Larry Klinger, may not be the most sympathetic detective ever written, but he is dogged and he asks questions, both the right questions and the wrong ones. He wants the truth, but then isn’t sure what truth really is, or what it serves.

And he’s not quite as broken as Michael Pollitz, who seems to have lost all his emotions except anger at his own mistakes.

The story also describes the ways that the Chicago Mob held power, and then how it faded, as seen through the way that Michael’s friend’s family rises and eventually falls. Also in the way that the influence of the Mob bought restaurants, strip clubs, and prison guards.

I lived in the Chicago area in the 1980’s and 1990’s, and I could recognize some of the places described in the story. I drove some of the same roads that Pollitz does, and at the same time period. I almost felt like I recognized some of the restaurants, and maybe I did. In the newspaper and TV news of that area, the Mob was still a force, but fading. There were always stories of places that were owned, or people who went to school with the children of mobsters, just as Michael did.

The mystery, some of which remains a mystery, was compelling, and the Chicago felt right.

John is giving away a copy of Dialogues of a Crime to one lucky (US/CAN) commenter.
a Rafflecopter giveaway

4 thoughts on “Review: Dialogues of a Crime by John K Manos + Giveaway”