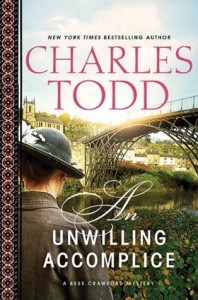 Home on leave, Bess Crawford is asked to accompany a wounded soldier confined to a wheelchair to Buckingham Palace, where he’s to be decorated by the King. The next morning when Bess goes to collect Wilkins, he has vanished. Both the Army and the nursing service hold Bess negligent for losing the war hero, and there will be an inquiry.

Then comes disturbing word from the Shropshire police, complicating the already difficult situation: Wilkins has been spotted, and he’s killed a man. If Bess is to save her own reputation, she must find Wilkins and uncover the truth. But the elusive soldier has disappeared again and even the Shropshire police have lost him. Suddenly, the moral implications of what has happened—that a patient in her charge has committed murder—become more important to Bess than her own future. She’s going to solve this mysterious puzzle, but righting an injustice and saving her honor may just cost Bess her life.

One of the things that makes the Bess Crawford series so interesting is the way that Bess manages to get herself into trouble. Naturally, she has to investigate what went wrong in order to get herself out of trouble. 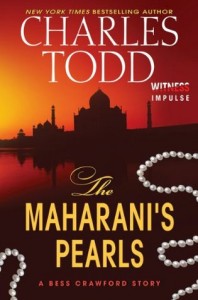 It’s clear that Bess has been doing this pretty much all her life, based on the story The Maharani’s Pearls (reviewed here) which has Bess at age 9 investigating an attempted assassination. Well more like making sure that her parents and the indefatigable Simon Brandon pay attention and investigate for her. After all, she’s only 9.

But in An Unwilling Accomplice, Bess is not the instigator of the particular trouble she has to investigate. Someone else puts her into the soup, and it takes all of Bess’ ingenuity and downright pig-headedness to find the answer that gets her out of it.

It was a thundering great honor for a soldier to receive his medal directly from the King. So when a Sergeant Wilkins requests that Bess accompany him to the ceremony, while she’s puzzled, she complies with her orders. Sergeant Wilkins is both a hero and an invalid, and her nursing services might be required. And, she gets to extend her leave a few more days.

But Bess doesn’t remember Wilkins, nor can she figure out why he’d ask specifically for her. In the cold light of morning, it unfortunately looks like Wilkins picked her specifically because she didn’t know him. During the night, he tossed off all his bandages and walked out of his hotel under his own steam.

In other words, a decorated war hero goes AWOL on her watch. Bess is under suspicion as his accomplice, and her nursing career is in extreme jeopardy.

Just like Caesar’s Wife, the Nursing Sisters of Queen Alexandra’s Nursing Service must be above reproach. And Bess suddenly isn’t.

As if things couldn’t get worse, while Bess is still under house arrest and waiting for a verdict on her own future, Scotland Yard is presented with evidence that her deserter went north and committed a murder. The mystery gets murkier, but Bess is seen as a bit less culpable–based on witness statements, she wasn’t present at the murder and hasn’t been further involved.

Whatever this is, it is way more than a simple case of dereliction of duty, either Bess’ or Wilkins’.

So what is it? That’s what Bess is determined to uncover. Until she can find Sergeant Wilkins and either turn him in or get him to make a clear statement to the police and the Army, there will always be the shadow of suspicion on her otherwise clean record.

With the assistance of Sergeant-Major Simon Brandon, her friend and her father’s attache, Bess sets out to trace the route that Sergeant Wilkins seems to have traveled across country. Along the way she finds deceived nurses, irreproachable eye-witnesses, and a multiplicity of closed-mouth villages protecting too many men who seem to be temporarily on leave from their senses or the Army, or possibly both.

At the end, she has more than enough motives for murder; and too many potential suspects.

Escape Rating B+: The Bess Crawford series does a terrific job of letting readers experience English life in the World War I period. Yes, there is a slight resemblance to Downton Abbey and Upstairs, Downstairs, but only because of the period setting. Bess Crawford is no debutante, she’s an Army nurse and the daughter of a career officer. She works, and she works hard.

As the daughter of a serving officer, she also has had experience living in India. Her perspective is more cosmopolitan than most gently-bred women of her time. Sybil Crawley she isn’t.

But there are tons of interesting commentaries on how much life has changed for young women since the war. Bess is still subject to some of the strictures, especially while she’s on leave, but at the same time she is a professional who expects to perform up to, and even past, her capacity.

This is still a time when young ladies’ reputations were expected to be protected at all costs in order to save them for marriage. The contrasts between Bess’ nursing practice on the field and the behavior required of her at home can sometimes be jarring, but feels real.

The action of this particular story takes place entirely in England, so Bess often feels those differences. And the impetus for the quest that is the heart of the story exists because her reputation must be spotless for her to serve as a nurse; a restriction that didn’t apply to officers or doctors.

Bess sets off on a cross-country journey to find the man who put her under so much suspicion. She needs to have her name cleared, but equally, she needs to find out why he deserted and why he committed murder.

As Bess hunts down her quarry, she is faced with all the changes that have occurred in England. The war is nearly over, but as a battlefield nurse, she hasn’t yet experienced that for sure. There are still plenty of wounded men. But she will have to come home when peace breaks out, and so much has changed.

While it is definitely interesting to follow Bess along, the journey did double-back on itself several times, especially as Bess and Simon found themselves chasing more than one man and following up more than one red herring. It will be part of Bess’ ongoing development to see how she handles peacetime, but this story rambled a bit while Bess did.

Her relationship with Simon Brandon is hard to pin down. They are friends, and they rely on each other. Without Simon’s assistance, Bess’ journey would not have been possible, and would have also been more dangerous.

They are so very comfortable with each other.

The reader can’t help but wonder if their relationship will evolve into something else after the war. They get closer with each adventure!