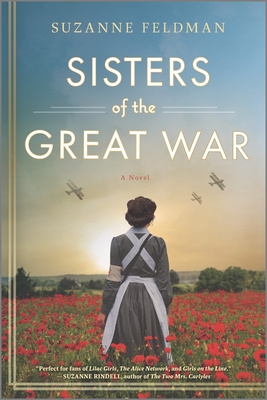 Inspired by real women, this powerful novel tells the story of two unconventional American sisters who volunteer at the front during World War I

August 1914. While Europe enters a brutal conflict unlike any waged before, the Duncan household in Baltimore, Maryland, is the setting for a different struggle. Ruth and Elise Duncan long to escape the roles that society, and their controlling father, demand they play. Together, the sisters volunteer for the war effort--Ruth as a nurse, Elise as a driver.
Stationed at a makeshift hospital in Ypres, Belgium, Ruth soon confronts war's harshest lesson: not everyone can be saved. Rising above the appalling conditions, she seizes an opportunity to realize her dream to practice medicine as a doctor. Elise, an accomplished mechanic, finds purpose and an unexpected kinship within the all-female Ambulance Corps. Through bombings, heartache and loss, Ruth and Elise cherish an independence rarely granted to women, unaware that their greatest challenges are still to come.
Illuminating the critical role women played in the Great War, this is a remarkable story of resilience, sacrifice and the bonds that can never be vanquished.

“It is only those who have neither fired a shot nor heard the shrieks and groans of the wounded who cry aloud for blood, more vengeance, more desolation. War is hell.” The quote is by William Tecumseh Sherman. While Sherman was referring to the American Civil War, it is just as germane to World War I, and indeed any war either before or since.

Sisters of the Great War focuses on, not those who fired the shots, but rather those whose duty it was to hear the shrieks and groans of the wounded. Those who were tasked with the duty of transporting the wounded from the “front” to the makeshift hospitals nearly always inadequately staffed with doctors, nurses and orderlies who did the best they could with what little they had to patch them up if they could, invalid them out if they could not, or at least give them as much peace and surcease from pain as possible as they died.

Ruth and Elise Duncan represent two of those women. Ruth as a nurse, and Elise as an ambulance driver and mechanic. The story in Sisters of the Great War is the story of service on the front lines of that hell, undertaken with a lot of pluck, a great deal of stubbornness, and no small amount of naivete as a way of escaping privileged but unfulfilled lives under their father’s dictatorial thumb.

In Baltimore. In the United States. In 1914. Three years before the Americans entered the war. They volunteered, not really knowing, as no one did in 1914, that the war was going to take four long years of trenches and gas and devastation. Ruth left behind her father’s stern disapproval in the hopes that somehow, someway, serving as a nurse in wartime would give her the experience and the attitude needed for her to live her dream and become a doctor.

Elise just came along to keep her sister safe. Not that, as it turned out, safety was what either of them was built for. Nor was there any safety to be had in hospital tents or in barely functioning ambulances that were shelled almost as often as the trenches.

This is a story of perseverance in the face of bombs, shells and prejudice, railing against the lice and the substandard food and the even worse conditions and the sheer bloody-mindedness required to do not nearly enough with not nearly enough in order to save as many as possible – even if that wasn’t nearly enough either.

But they tried their best. They kept trying in the face of all the odds. And in the end, it was enough.

Escape Rating A: There have been plenty of stories featuring women who served in World War I as nurses or ambulance drivers. I can think of three off the top of my head; Phryne Fisher, Maisie Dobbs and Bess Crawford. (It may or may not be a coincidence that all lead mystery series.)

But the thing that struck me about all three of those heroines in comparison to Ruth and Elise Duncan is that in all three of those cases, in spite of the war being a critical part of each of their experiences, the brutal, devastating, depressing horror of the experience itself is a bit glossed over.

Phryne firmly keeps herself from looking back at her experience as an ambulance driver, while Maisie’s wartime experience effectively occurs between stories. Even Bess Crawford a nurse in a forward aid station, just as Ruth Duncan is at the beginning of her career, seems to carefully glance away from the worst of the gore in the operating theater to focus on the more individual gore of the murders that Bess uncovers.

What feels singular about Sisters of the Great War is that it uses Ruth’s and Elise’s slightly separated perspectives to put the nearly neverending horrors of the war and the desperation of the health care workers attempting to save them in the center of the story.

We’re with them every draining, numbing step of their way. We feel for them and with them and it makes their experience searing and horrifying and so very human. They’re both trying so hard and it’s never enough and they keep doing it anyway. We can’t turn our eyes away from their story – because they didn’t.

And yet, they’re not superhuman. We see their hopelessness and their fears and their exhaustion and we’re with them.

But because the story doesn’t gloss over just how much hell this war is, it’s a hard book because their experience, and the entire experience of that war, was so very hard and so deeply dark.

Not that there aren’t light moments in the story and in their hopes for the future – even as both of those things are full of fear. Ruth may have volunteered to escape their father, but she is also following the man she loves. Elise finally admits the truth of her own heart, and lets herself fall in love with another woman in spite of the censure they will face.

They do emerge from their war, bloody, often literally, and not either unscathed or unbowed. But they find the light at the end of their long dark tunnel and the entire experience makes for an extremely compelling read.

3 thoughts on “Review: Sisters of the Great War by Suzanne Feldman”