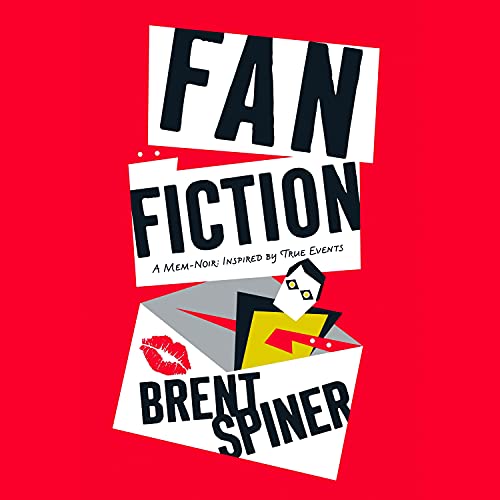 From Brent Spiner, who played the beloved Lieutenant Commander Data on Star Trek: The Next Generation, comes an explosive and hilarious autobiographical novel.
Brent Spiner’s explosive and hilarious novel is a personal look at the slightly askew relationship between a celebrity and his fans. If the Coen Brothers were to make a Star Trek movie, involving the complexity of fan obsession and sci-fi, this noir comedy might just be the one.
Set in 1991, just as Star Trek: The Next Generation has rocketed the cast to global fame, the young and impressionable actor Brent Spiner receives a mysterious package and a series of disturbing letters, that take him on a terrifying and bizarre journey that enlists Paramount Security, the LAPD, and even the FBI in putting a stop to the danger that has his life and career hanging in the balance.
Featuring a cast of characters from Patrick Stewart to Levar Burton to Trek creator Gene Roddenberry, to some completely imagined, this is the fictional autobiography that takes readers into the life of Brent Spiner and tells an amazing tale about the trappings of celebrity and the fear he has carried with him his entire life.
Fan Fiction is a zany love letter to a world in which we all participate, the phenomenon of “Fandom.”

There’s a fine line between parody and farce, and it feels like Brent Spiner tap-danced over it in both directions, multiple times, during the course of this story. If that dance turned out to be set to one of Frank Sinatra’s greatest hits, or something else from the “Great American Songbook” I wouldn’t be in the least bit surprised.

It might be best to go into this story not really thinking of it as, well, a story. It’s more of a combination of homage and love letter. The “mystery” part of the story reads like an homage to the noir films of the Golden Age of Hollywood, complete with a reference to that classic image of noir, the painting Nighthawks by Edward Hopper.

It’s also a love letter, to his friends and fellow crew members of Star Trek: The Next Generation, and to all of us who vicariously voyaged with them aboard the Enterprise-D.

But as a story, it goes over the top so much and so often that it pratfalls down the other side. At the same time, it mixes events from his real life in a way that intentionally blurs the line between fact and fiction to the point where the reader just has to hang on for the ride without attempting to figure out which is which.

So the story is grounded in what feels like the real, the real traumas of Spiner’s childhood with his abusive stepfather, the real grief over the death of Gene Roddenberry which occurs during the course of the story. But the picture that hangs within that real framing is the story of a crazed fan stalking the actor and making his life his misery, while his attempts to find help to keep him safe and find his stalker send the story way over the top into the land of make believe.

At least I hope they do, because some of what happens can’t possibly be real. Can it?

Escape Rating B: I’ll confess that as much as I’m still a Star Trek fan, particularly the original series and Next Generation, I had no intentions of reading this book, until I saw the audio. The full cast audio with appearances by several of the Next Gen cast playing themselves – albeit a slightly exaggerated version thereof. And that’s what got me to pick up the audio – and eventually the book because I needed to doublecheck more than a few things.

There is still plenty of animosity among the remaining members of the original series cast, even after 50+ years, but there were no such rumors about the Next Gen cast, and the idea that they would get together and do this for one of their members after all these years says a lot about the group dynamic. A dynamic that was on full display in this recording.

So the audiobook is both a blast and a blast from the past and I was all in for that. Fan Fiction is a tremendously fun listening experience, and hearing everyone play themselves made the whole thing a real treat even when the story itself doesn’t quite hold up to examination.

I also have to say that, as weird as it is in yesterday’s book where the author is a character in his own fictional story, it’s even weirder when the author is a real-life character in a story that is basically fan fiction about his own life. Particularly in the bits where he alludes to his own romantic escapades. (He’s married now, but he hadn’t even met his wife in 1991 when this story takes place. So it’s weird and meta but not quite THAT weird and meta.)

There’s a saying about the past being another country, that they do things differently there. Fan Fiction, in addition to its bloody animal parts in the mail, bombshell twin detectives who BOTH have romantic designs on the author AND the stalker who gets stalked by yet another stalker, is also a trip down memory lane back to 1991.

That’s 30 years ago, and we, along with the world, were a bit different then. Next Generation was in its 5th season, and still not all that popular in the wider world of TV no matter how huge a hit it was among science fiction fans. Next Gen was in syndication only at a time before the streaming juggernauts were even a gleam of a thing in a producer’s eye. It was the author’s really big break as an actor, and that was true for all of the cast except Patrick Stewart and LeVar Burton.

So we were all a lot younger then, childhood traumas were a lot closer in the rearview mirror and still being worked on and worked out, and no one knew then that Star Trek would become a multimedia colossus to rival Star Wars. None of us knew then what we know now, and that’s true of the author and his attitudes towards his own celebrity.

Back to this story. The mystery/thriller aspects push the willing suspension of disbelief well past the breaking point. I half expected this to turn out to have all been a dream like The Wizard of Oz. But the full cast recording turns the whole thing into a delightful trip down memory lane as well as a hilarious send-up of acting and fame and celebrity and fandom. .

If you’re a Star Trek fan, get the audio and settle in to hear some of your favorite characters tell you just one more story. Bits of it might even be true!