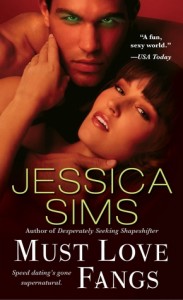 From the supernatural dating capital of the world, it’s the Midnight Liaisons Dating Game!

“Cold hands, warm heart” applies to Bachelor #1. He believes that nighttime is the right time. Welcome, Bert the vampire!

Bachelor #2 is an old soul—four hundred years old, to be exact. If you want someone to spend eternity with, choose Andre the vampire!

Dying to snuggle up with a strong, sexy were-cougar? Bachelor #3 is a real cat(ch) who will tail the woman of his dreams until his irresistible charm melts her heart. He’s Joshua Russell!

Professional matchmaker Marie Bellavance has hooked up hundreds of were-things, harpies, faeries, and vamps. Now it’s her turn. This alluring human’s not afraid to break the rules. But when nature takes over, a forbidden romance could be her only chance to live a full, healthy life. If there’s a trick to getting turned, she needs to find it . . . fast.

I picked this one up for pure fun. The whole concept of the supernatural dating agency was explored to marvelously snarky effect in Beauty Dates the Beast (reviewed here), and I keep following the series to see where it goes. The second book, Desperately Seeking Shapeshifter was still good, but didn’t quite match the sparkling banter of the first book. While there were story reasons why that happened, I missed the banter.

Midnight Liaisons is a dating agency for supernaturals. Since the shifters and the vamps haven’t come out of the coffin (or whatever) yet, everything about the agency is super secret. It was intended to be staffed by humans, but first the owner gets mated to a were-cougar, and her supposedly human sister turns out to secretly be a werewolf.

Marie-Pierre Bellavance may be human, but she’s a dying human, and no one knows about it. Marie suffers from Fatal Familial Insomnia, which really does exist, no matter how crazy it sounds. The short version is that the sufferer is incapable of sleeping, which eventually leads to panic attacks, hallucinations, dementia and death in just a couple of years. It’s also hereditary, but usually doesn’t strike until middle age, so Marie’s mother didn’t find out that she was a carrier until she herself was struck down, well into Marie’s teens.

Marie’s extreme anxiety seems to be bringing it on early, but Marie has a plan. She works at Midnight Liaisons, and it finally dawns on her that neither vampires nor shifters get diseases. All she has to do is convince one of the supes to turn her, and she’ll be cured.

Unfortunately, there’s a big scandal in the shifter community because some young idiot broke secrecy and turned his girlfriend against her will. Then he fell out of love with her, and she threatened to go to the newspapers. (As I said, he was a young idiot)

Marie starts secretly looking for a vampire. This is a problem. Vampires are secretive and dangerous, and Marie can’t afford to be picky. Even more troubling, Marie’s nemesis, the serial dater Josh Russell, keeps showing up at the agency and trying to get her to go out with him. Or treat him as anything other than an annoying brother. Or simply notice him in a positive way (other than checking out his gorgeous ass).

Josh is clearly panting after Marie for more than just possibly sex. No matter how much the two of them snark at each other, there’s real caring under the surface. So much real caring that when Marie finally confesses the reasons for her vampire pursuit, Josh helps her anyway. Even though the only thing he wants to do with Marie is take her for his mate.

And even though successfully turning her could result in a one-way exile to Greenland–for both of them. Josh has his work cut out for him to convince Marie to trust him; before she dies or is beyond his reach.

Escape Rating B-: This story felt like it had a slow middle. It starts out strong, with the sharp-tongued banter between Josh and Marie, but after Marie’s illness is revealed, it wallows in her increasing symptoms and incredibly desperate attempts to find someone to turn her a bit too long.

It isn’t obvious at the beginning that Josh really has a heart of gold under his playboy exterior. He dates tons of women, but only once. When he starts showing Marie that his playfulness hides a major white knight complex. the reader still ends up wondering about the hordes he’s run through on his way to true love. (I’d seriously doubt him too)

After Josh introduces Marie to just some of the people that he helps, most of them older women who enjoy his bad-boy charm, it’s still not 100% certain whether Josh is falling for her or just feels the need to save her, too. Some vamps are extremely shady characters, even (or especially) with each other. Marie definitely needs saving, or at least a bodyguard once she sets herself out as vampire bait.

In the last quarter of the book, when Josh has to rescue Marie from the inevitable vampire trap she falls into, the action moves fast and furious. Not just because they finally manage to admit that they love each other, but because Marie finally breaks the rules she should have all along, and then they have to deal with the messy fallout.

I see big changes for the shifter community on the horizon. I hope we have more fun along the way.