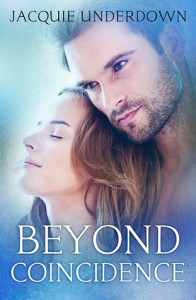 In 2008, 250 Australian and British soldiers are uncovered in a mass grave in Fromelles, France, lost since the Great War. One soldier, bearing wounds of war so deep it scarred his soul, cannot be laid to rest just yet.

When Lucy bumps into the achingly sad soldier during a trip to France, she doesn’t, at first glance, realise what he is – a ghost who desperately needs her help. Lucy can’t turn away from someone who needs her, even someone non-corporeal, and they travel back together to Australia in search of answers and, hopefully, some peace.

This chance meeting and unexplainable relationship sets into motion a chain-reaction of delicate coincidences that affect the intertwined lives of family, friends, and lovers in unexpected, beautiful ways.

Beyond Coincidence is a romance that requires that the reader throw their willing suspension of disbelief out the window, but the history behind the love story is based on actual events.

Let’s just say that the author has taken an extremely romantic perspective on a project that is both sad and moving, and uses the romance to personalize something important. 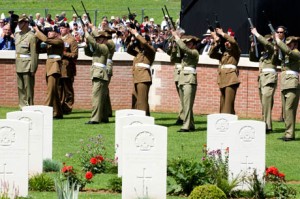 The genesis of everything lies in the Battle of Fromelles, which took place in France in World War I. Fromelles wasn’t merely a disaster for the Allies, it was also one of the most costly battles in history for the Australian Army. Over 5,500 men were killed in 24 hours of fighting.

In 2008, a mass grave was found near Fromelles, containing the unidentified bodies of 250 of those Australian losses. In the intervening years, a project has been mounted to identify those remains and create closure for the families.

Beyond Coincidence is a romanticized, in some ways paranormally romanticized, story about the identification of the remains of one particular soldier.

Lucy sees the ghost of a man, in a WWI Australian Army uniform, visiting the gravesite in Fromelles. At first, she thinks he’s a reenactor. When he keeps turning up, she decides he’s a stalker. It’s only when he materializes in her car that she finally starts accepting that he’s a ghost.

Freddy Ormon is one of the unidentified soldiers from the battle. He convinces Lucy that he won’t be able to rest until his grave is properly marked and his remains are identified. He has no idea how this is supposed to happen, just that it has to happen and that there is a greater plan that has chosen Lucy as the one to bring it about.

So Lucy sets out on a quest to find Freddy’s possible descendants. He knows that his wife was pregnant when he left Australia, so it is possible that there is a great-grandson or granddaughter back home. Lucy just has to find him, or her.

Lucy heads back home, and hunts down Nate Ormon, Freddy’s great-grandson. Both Lucy and Nate are at career and romantic loose-ends, so when Freddy serves as unintentional matchmaker, they click. Nate even looks like Freddy, which is not a hardship for Lucy. She’s quite fond of her “friendly ghost”.

In spite of some ham-fisted interference from Lucy’s suddenly violent ex, Nate and Lucy discover that they have a lot in common beyond Nate’s interfering ancestor. But they have some deep-seated fears that almost drive them apart.

The story ends with the promise of one of the sweetest but most surprising second-chances at love that I’ve read in quite a while.

Escape Rating B: Although this is Lucy and Nate’s love story, Freddy feels like the most memorable character in the book. He is so confused by what has happened to him, and so frustrated at his inability to act for himself.

His grief over the death of his wife is fresh and new. She lived decades without him, but he’s just now confronted with both her death and that of the child he never got to see. The world is so different from what he knew.

At the same time, his interactions with Lucy are quite funny. Not because he doesn’t know the 21st century, but the way he adapts surprises and dellights her. You can see them becoming friends, no matter how unusual that friendship might be.

There’s a sense that Freddy is Lucy’s guardian angel in some way. He looks out for her, and he’s also pushing her life into a different but better track than she would have found on her own. Lucy and Nate do not “meet cute” and without a push, she probably would never have seen him again.

Freddy, or someone above him, are also manipulating events for their own ends. “This has all happened before and it will all happen again” as they say. And the set up between Lucy and Nate does feel contrived. As much as I liked Freddy as a character, I had to swallow my logic in order to enjoy the story.

But I certainly did enjoy it quite a bit. It’s sweet and romantic, and I loved the history angle.

Jacquie is kindly giving a $30 gift card for Amazon! To enter, use the Rafflecopter below.

7 thoughts on “Review: Beyond Coincidence by Jacquie Underdown + Giveaway”