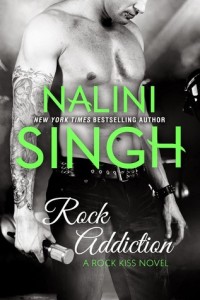 A bad boy wrapped in a sexy, muscled, grown-up package might be worth a little risk…

Molly Webster has always followed the rules. After an ugly scandal tore apart her childhood and made her the focus of the media’s harsh spotlight, she vowed to live an ordinary life. No fame. No impropriety. No pain. Then she meets Zachary Fox, a tattooed bad boy rocker with a voice like whiskey and sin, and a touch that could become an addiction.

A one-night stand with the hottest rock star on the planet, that’s all it was meant to be…

Fox promises scorching heat and dangerous pleasure, coaxing Molly to extend their one-night stand into a one-month fling. After that, he’ll be gone forever, his life never again intersecting with her own. Sex and sin and sensual indulgence, all with an expiration date. No ties, no regrets. Too late, Molly realizes it isn’t only her body that’s become addicted to Fox, but her heart…

I love Nalini Singh’s Psy/Changeling series, but I’ll admit to being ‘meh’ about the Archangels series. So I picked up Rock Addiction to see how I would feel about her writing in a non-magical contemporary romance.

The story gets jumpstarted in a way that left me wondering if my ebook had lost a few pages in the beginning. Molly and Fox’s romance begins with the instantest insta-lust I’ve read in a long time, maybe ever.

They see each other across the proverbial crowded room, and he decides to pick her up. He waylays her in the elevator and talks her into a one-night stand. It doesn’t take much talking, either. Fox is a rock star on an epic scale, and Molly is a librarian.

Being a librarian myself, the whole concept of this story has elements of wish fulfillment/fantasy; mild-mannered librarian sweeps rock god off his feet, and he whisks her away to his sex, drugs and rock and roll, over-the-top lifestyle of the rich and famous.

We librarians aren’t all mild-mannered, and neither is Molly. Also Fox doesn’t do drugs, and the life of a rock star who intends to be good to the music requires a lot more rigor and dedication than an outsider might imagine, at least according to this story.

It’s hard work to be good at anything, and that includes music. Also, the constant touring is exhausting and draining, no one ever gets to really relax or be offstage and out of reach. But it’s the price they pay for the music.

Fox and Molly connect instantly on every level, including (especially including) sex. Molly gives her virginity in a one-night stand with a rock star that she never expects to see again. While Fox makes it obvious to the reader that he intends more than just one night, Molly doesn’t know that. It took way too little convincing for Molly to jump into bed with Fox under those circumstances, unless it was all about his status and not the connection.

There are a lot of sex scenes in this book, in every chapter and seemingly multiple times. To the point (for this reader) that the sex got in the way of the story. These are two people who both carry a TON of emotional baggage, and for their relationship to go even half as smoothly as it did, there seemed to be a lot of communication missing until the second half of the book.

Fox’s abandonment by his mother is only one part of the tragedy. The scandal that surrounded the end of her father’s political career, criminal prosecution, and death left Molly with scars so bad that she changed her name to escape the relentless harassment and bullying.

In between all of the sex, it is sweet the way that Fox and Molly manage to overcome the scars they both have, and create a loving relationship that is capable of withstanding the relentless pressure of the media. They are attacked and hounded, and yet they still find a way to forge something strong and beautiful.

The second half of the book, showing the way that they manage to find a way through, together, was both hot and extremely romantic.

Escape Rating B+: The second half of the book is stronger than the first. By that point, Molly and Fox are actually communicating enough out of bed for the reader to believe that they are building a relationship. We see them work through their issues and the adversity that threatens them, and are able to root for them to make it together.

We are also able to see the way the Molly and Fox’s relationship builds a family for his entire band, and see just how much the members of Schoolboy Choir care for each other, and rely on each other. The glimpses into the relationship between drummer David and Molly’s sister Thea are tantalizing. I can’t wait to read their full story in Rock Courtship.

I also hope that we will someday get the full story behind whatever is going on with Molly’s best friend Charlie and her boss, T-Rex. While a relationship between a boss and his admin is a classic trope, it’s classic for a reason.

As far as Rock Addiction goes, I love the concept of normal girl gets rock star. It has a wish fulfillment aspect that is irresistible. I wish that their relationship had a little more communication in it, and not quite as many sex scenes. Each scene was individually good (terrific) and very hot, but they got in the way of the plot.

I was surprised that there was no “big bad” or truly scary and possibly break-up worthy crisis. There’s a crisis, but Molly and Fox weather it with a bit too much ease. I was glad they did, but it just didn’t seem like as much of a test as I would have expected.

But their happy ending was very special and very much earned. And I raced through the book in an afternoon in order to get there!