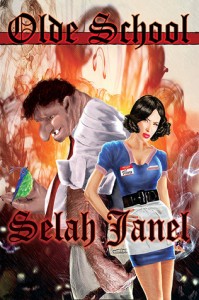 Kingdom City has moved into the modern era. Run by a lord mayor and city council (though still under the influence of the High King of The Land), it proudly embraces a blend of progress and tradition. Trolls, ogres, and other Folk walk the streets with humans, but are more likely to be entrepreneurs than cause trouble. Princesses still want to be rescued, but they now frequent online dating services to encourage lords, royals, and politicians to win their favor. The old stories are around, but everyone knows they’re just fodder for the next movie franchise. Everyone knows there’s no such thing as magic. It’s all old superstition and harmless tradition.

Bookish, timid, and more likely to carry a laptop than a weapon, Paddlelump Stonemonger is quickly coming to wish he’d never put a toll bridge over Crescent Ravine. While his success has brought him lots of gold, it’s also brought him unwanted attention from the Lord Mayor. Adding to his frustration, Padd’s oldest friends give him a hard time when his new maid seems inept at best and conniving at worst. When a shepherd warns Paddlelump of strange noises coming from Thadd Forest, he doesn’t think much of it. Unfortunately for him, the history of his land goes back further than anyone can imagine. Before long he’ll realize that he should have paid attention to the old tales and carried a club.

Darkness threatens to overwhelm not only Paddlelump, but the entire realm. With a little luck, a strange bird, a feisty waitress, and some sturdy friends, maybe, just maybe, Padd will survive to eat another meal at Trip Trap’s diner. It’s enough to make the troll want to crawl under his bridge, if he can manage to keep it out of the clutches of greedy politicians

It’s not just that the hero of Olde School is a troll, but that he’s a troll caught on the cusp between traditional and modern that makes this story such an absolute hoot.

There’s a lot of marvelous commentary on the problems and perils of modernization, as well as a few digs at racism, sexism, luddite-ism and everything else under the sun.

The story as a whole is about the dangers of believing that you can get something for nothing. That magic is what we make it, and that wishing for the mythical “good old days” without knowing exactly what you are wishing for is a fast way to get dead. Or worse.

The snarky commentary about various fairy-tale princess cults was a hoot and a half all by itself.

But the story itself is a modern take on classic fairy tales. What makes it different is that all the characters are themselves fairy-tale creatures who have either stopped believing in magic or believe in it a little (a whole lot) much too much.

Paddlelump Stonemonger is a forward-thinking businesstroll in Kingdom City. His bridge over the Crescent Ravine has brought him a lot of well-earned gold, and the attention of the Mayor of Kingdom City. Mayor Addlelump is a conniving pixie who is running the city like it’s his own private business, lining the pockets of his highborn friends and taking away land and businesses from anyone who seems to be making lots of money.

Paddlelump is in the Mayor’s sights, but he seems to be everyone’s target.

His troll friends just tease him for not standing up and firing his new housemaid. Which he should, because she’s stealing from him and she’s set him up for murder. She wants his money, and she thinks she can get some prince from a tiny kingdom to kill him in order to free her from his supposed evil clutches. Which Padd doesn’t even have.

But there is much more clutching at Padd than just his lying, sneaky maidservant. There is old evil awake in the Thadd Forest, and Padd is the only one who can stop it. If someone can find a clue-by-four big enough to knock some sense into him before it is too late for him, for the kingdom, and possibly for the entire world.

The “Olde School” magic that has awakened in the forest wants flesh and blood sacrifices. And the princess cult members are totally programmed to believe that magic works. It just doesn’t work the way that they think it does, and certainly not for their benefit.

The moral of the story seems to be; “Be careful what you wish for, you might get it. Or someone might make you think you’ve gotten it, when they’ve really gotten you.”

Escape Rating B-: The world that the author has built is a marvelous work of invention. It’s not just that this is a fantasy confection, but everything hangs together really well.

On the other hand, the story takes about half the book to pull itself together and launch into the real action of the plot. The earlier build-up pays off in the second half, but the story takes a while to really get going.

The injected commentaries on our own modern world are funny but not overbearing. And it is an absolute scream when the pro-technology and pro-traditional voices both come from trolls. (Also that internet trolls are actually, well, trolls).

Unionized barmaids and maidservants just feels like an idea that needs to come to more fairy tale worlds.

At the same time, Olde School is very firmly in the tradition of contemporary fantasy, where everyone believes that the magic has gone out of the world, when in fact it hasn’t. So people have read all the wrong stories to have any knowledge of how to fight the evil that has reappeared out of the mythic past.

In some ways, Padd makes a great point-of-view character because he has so much self-doubt that he second-guesses everything, which means he mulls over a lot of stuff and we get introduced to the world through his mulling.

On the other hand, there are times when Padd seems thick as a brick, even for a troll, and we want to hit him with the proverbial clue-by-four. Hard, multiple times and with extreme prejudice.

His less modern troll friends are sometimes more on the ball than his supposedly forward-thinking self. But the way that they continually rib him about all his short-comings, yet stand with him with the chips are down is wonderful. Also snarky and funny.

As a fairy tale story that owes way more to the grimmer original versions of the Brothers Grimm than anything ever created through Disneyfication, Olde School is a lot of fun.